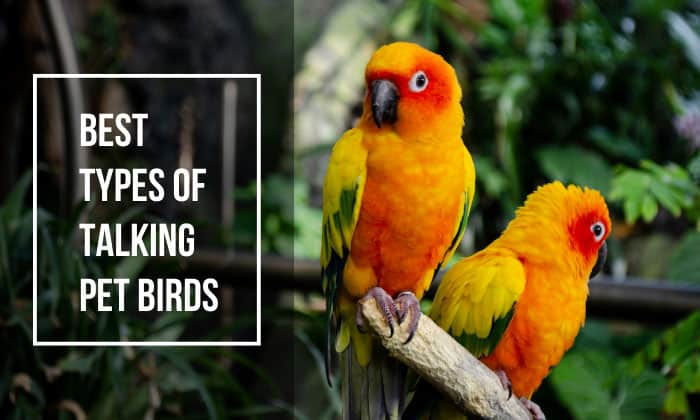 It’s not only humans who enjoy speaking with each other. Sometimes, our pet birds join in the fun and converse with us.

The best types of talking pet birds are parakeets, parrots, macaws, cockatoos, and mynas. Within those are several subspecies that have earned reputations as talking bird breeds.

This article examines nine common pet birds that talk and each one’s pros and cons. Whether you’re looking to purchase one or simply looking for fun facts to share with friends, let’s get into it!

When picking pets, people usually simply consider price and required maintenance. Some owners, however, are specifically on a quest for birds that speak.

For those looking, here is the name of the birds that talk:

Parakeets are known as the best bird for beginners because they are relatively cheap, low maintenance, and highly sociable. Of 115 available subspecies, here are the top three as pets:

Budgies are small bird species, most commonly seen as blue or green birds, and are perfect to have as companions.

They are brilliant and are listed in the Guinness Book of World Records as having the most extensive vocabulary. In particular, a budgie named Puck from California, USA knew a whopping 1,728 words!

However, budgies can be a little slow initially, taking weeks or even months to learn their first words. They also have raspy voices that make them difficult to understand.

Monk parakeets or quaker parrots are more expensive than regular budgies, but they live much longer and have more colorful personalities.

Owners claim they don’t only learn words quickly – they are also able to understand them and use them in context.

Since monk parakeets are so intelligent, they require daily stimulation. If not given, it may result in destructure or aggressive behavior from the birds out of boredom.

Monk parrots are also not legal in all states, so it’s best to check local guidelines before purchasing one.

Ringneck parakeets are known for speaking exceptionally clearly and in complete sentences. They can also mimic vocal inflections, producing more expressive conversations than other birds.

However, like humans, how much ringneck parakeets speak will depend entirely on how much time their owners spend with them. Interestingly, the more clever ones can mimic song lyrics or nearby human voices. 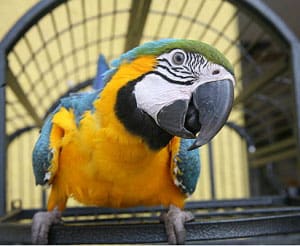 Every one can imagine pirates with their parrots that talk. Even if you don’t live on a ship out on the high seas, here are some types of parrots you can converse with at home:

African Grey Parrots are usually found at the top of the talking birds list because of their ability to learn so much so fast. They are said to be able to learn up to 1000 words with the proper training and use them in different contexts.

They can also speak clearly and mimic voices well, frequently tricking their owners into thinking it’s a person speaking, not merely a repeating bird!

As a pet, though, African Greys are problematic: they can require up to five hours of daily social interaction and cost thousands of dollars.

Some speak better, while others excel at whistling and singing.

Generally, however, all parrots, whether red or green parrots, are superb at mimicking sounds. They just also tend to be bossy and biters.

Eclectus Parrots are known for their sexual dimorphism or stark differences in the appearances of male and female genders. They are also known as one of birds can talk the best.

They have a shorter lifespan than other pet parrots but make up for it by being speedy learners. They are also less demanding of their owners but prone to pluck their feathers aggressively and be noisy at times. 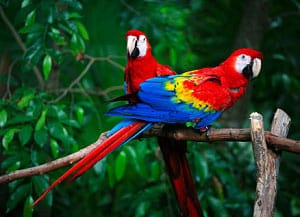 Macaws are one of the largest parrots you can own, sometimes growing up to 40 inches (over 3 feet) long!

While most macaw species can talk, they tend to enjoy making a lot of noise and are sometimes difficult to understand. However, they are known for their ability to use words in context and have actual conversations.

Aside from words, macaws are known to enjoy singing and mimicking other sounds. 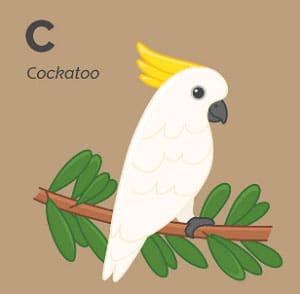 Cockatoos are less prolific than other species but are charming cheap talking birds.

They typically only learn a maximum of 50 words throughout their lifespan and have softer voices than other parrots, making them a little difficult to hear and understand.

Interestingly, cockatoo owners are discouraged from socializing with their cockatoo too much. Oversocializing can cause cockatoos to become over-attached to you, resulting in severe separation anxiety should you be away for extended periods. 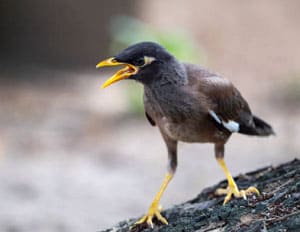 Mynahs are not naturally talkative – they are a species that need extensive training from a young age should you wish to converse with them.

They are also potentially harmful species to your environment. They are known to be an invasive species and create an imbalance in their non-native habitats.

That being said, if you are careful, mynahs are delightful to have as pets. They are well-adapted to living in cages and can mimic many other sounds besides the human voice, including car honks, chainsaws, and songs of different bird species!

Why Can Pet Birds Speak? 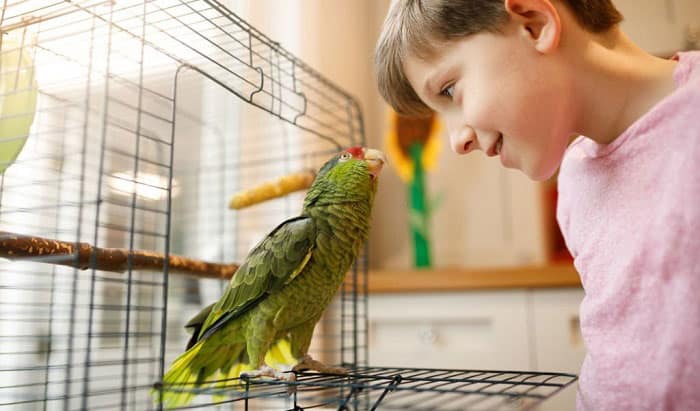 First, parrots are known to be vocal learners, meaning they mimic the sounds they hear to remember them.

Secondly, like almost all birds, parrots are wired to fit into a flock. They naturally try to act like others around them to be accepted and increase their chances of survival.

If parrots are always around talking to humans, they will be speaking too!

Unlike humans, though, parrots do not have vocal cords that enable them to speak. Instead, they control their chest muscles exceptionally well to create specific vibrations and airflow that produce sounds.

What is the easiest bird to teach to talk?

For those with more to spend, you can try one of the three parrot species listed in this article: the African Grey, Amazon, or Eclectus Parrot. These three are also extremely easy to teach to talk!

Which is the most talkative bird?

Budgies are considered one of the most talkative birds.

As a general rule of thumb, though, how much a bird talks depends on how much time its owner spends with it. The more you speak to your bird, the more it will talk back to you!

How much does a talking bird cost?

The price range for talking birds is vast. You can spend as little as $15 for a parakeet or up to $3,600 for an African Grey Parrot.

How long does it take to teach a parrot to talk?

Most parrots take weeks to learn their first few words and learn faster as their vocabulary grows.

They typically start talking with soft mumbling sounds that get louder and more defined as they become more confident in their abilities.

What are the best types of talking pet birds? There are several options available depending on your resources.

Regardless of the exact species you get, we’re sure you’ll enjoy having a new companion at home that you can speak and maybe even sing some karaoke with.

Don’t forget that you aren’t the only one they can speak to. If you haven’t seen them, you should watch the parrots on YouTube talking to Alexa!