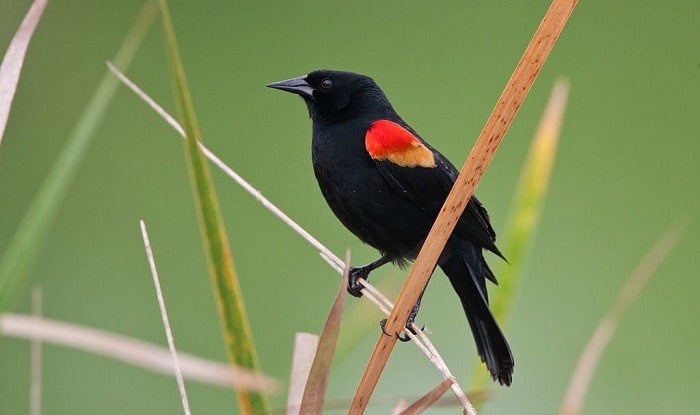 There are thousands of bird species in the world, and a few have the same shade combination. Particularly, in North America, you can find 10 birds that are red and black. The list includes the scarlet tanager, cardinals, vermilion flycatchers, woodpeckers, and more.

These birds have red and black hues in some parts of their body. And they definitely look good. In this post, we’ll get to know these adorable bird species. Knowing them will allow you to identify them.

In North America, you can see large black bird with redhead or red wings, birds with red bodies and black heads, and various combinations of red and black. Let’s discover interesting facts about these avians. 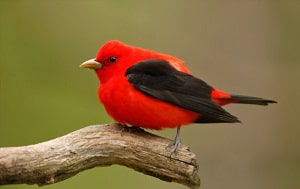 The scarlet tanager is a stout north American bird with red back and black wings. This avian species builds its nests in mature huge trees found in deciduous and alpine woodlands.

They are migratory birds that love insects, but can thrive also on fruits and flowers. Additionally, this kind of bird is protective of their breeding grounds.

Facts About The Scarlet Tanager

As a small and stocky bird, the scarlet tanager has amazing facts that you’ll be interested in. 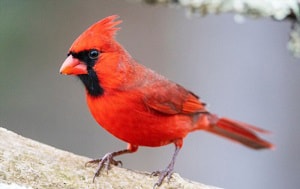 Red and black birds like the northern cardinals are absolutely attractive. This songbird species sings very well, and both sexes do so, unlike other breeds where only the males sing the most. They live in shrubberies and nest in tree branches.

Northern cardinal females lay 2-5 eggs, incubate them for 11-13 days, and repeat the process one more time before the year ends.

Facts About The Northern Cardinal

The northern cardinal is a popular bird, mostly because seven states proclaimed this avian as their state bird. These states are North Carolina, Illinois, Ohio, Indiana, West Virginia, Kentucky, and Virginia. 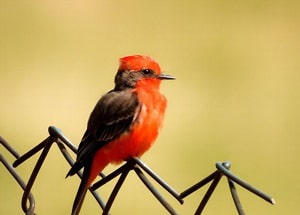 A vermilion flycatcher is a bright red bird with black wings that weighs 11-14 grams and measures 13-14 centimeters. This insectivorous species loves open places, and they prefer to nest in a leaf-free tree branch. Their population is at fifteen million, and their conservation status is not threatened.

Facts About The Vermilion Flycatcher

Vermilion flycatchers like to spend their time alone or with a friend. Their mating months are March-July and October-January. Let’s check out other facts about this bird species. 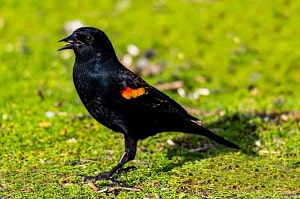 There are many types of red birds, and the tricolored blackbird belongs to the list thanks to the obvious red patch on their wings. This avian species starts a family in wetlands as well as searches for food in these places. And in the breeding season, they build a colony.

Facts About The Tricolored Blackbird

As extremely social avians, tricolored blackbirds stay in large flocks while searching for food. Their wingspan measures at 35.5 centimeters, and they’re 22.2 centimeters long with a weight of 59.5 grams. Plus, they like mingling with other blackbird species. 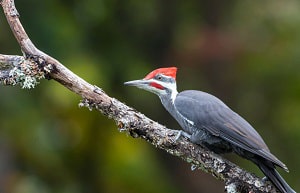 The pileated woodpecker is large at 16-19 inches. They nest in huge trees, where they dig holes using their sturdy bills. The unique body shape and color of this bird makes them distinguishable. They have a vivid crimson head, black throat, and white side lines.

Facts About The Pileated Woodpecker

This bird species thrives in open pine woodlands. As woodpeckers, they drum on large trees to establish their territory. 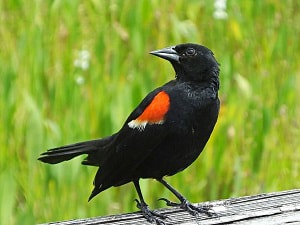 The red-winged blackbird is one of the birds with red in their name, and they live in wetlands. Males and females differ slightly in color. The former has a black body with yellow and red shoulders, while the latter has a paler color. Their bird calls include “oak-a-lee,” “cheer,” and “chek.”

Facts About The Red-winged Blackbird

Red-winged blackbirds prefer to feed on insects, grains, and seeds. Males are known to be aggressive during the mating season and safeguard their nesting territory.

Facts About The Masked Crimson Tanager

Masked crimson tanagers are known as both insectivorous and frugivorous and are found in Peru, Ecuador, Colombia, Brazil, and Bolivia. Their conservation status is stable, so no need to worry about extinction. 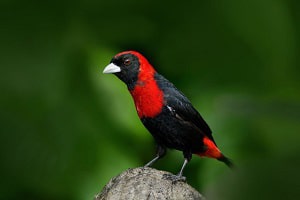 The crimson-collared tanager is a small black bird with red head. This species lives in humid woodlands, and they build their nests in trees. And in each breeding season, females lay two light blue and spotted eggs.

Facts About The Crimson-collared Tanager

Let’s explore a few facts about this bird species. 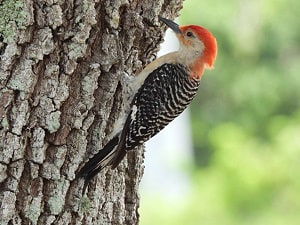 The red-bellied woodpecker is a black white and red bird that lives in woodlands and wetlands. Their diet includes invertebrates, insects, small avians, berries, bird eggs, fish, fruits, and frogs.

And in bird feeders, they love to eat suet and black oil sunflower seeds.

Facts About The Red-bellied Woodpecker

Red-bellied woodpeckers are non-migratory birds. During the nesting season, nest building is done by both pairs, especially by the males. They have up to three broods annually. 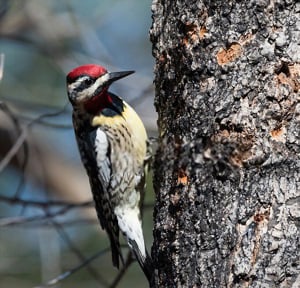 The yellow-bellied sapsucker is not a red bird with black head, but rather a black avian with a distinctive red head. They can be unfriendly to humans. This bird species weighs 35-62 grams and is 7.5-8.3 inches long. And their color combination includes black, red, white, and yellow.

Facts About The Yellow-bellied Sapsucker

Yellow-bellied sapsuckers rely on sap for food and sustenance.

In this post, we featured ten amazing birds that are red and black. Though similar in body color combination, each of the birds has its own characteristics. These avian species are fascinating, especially when you get to know them.

We hope you enjoyed reading this article. Now, when you see one of these birds, you will no longer get confused in naming them. And if you have any questions or new ideas, kindly share them with us. And please help us spread this post to social media.