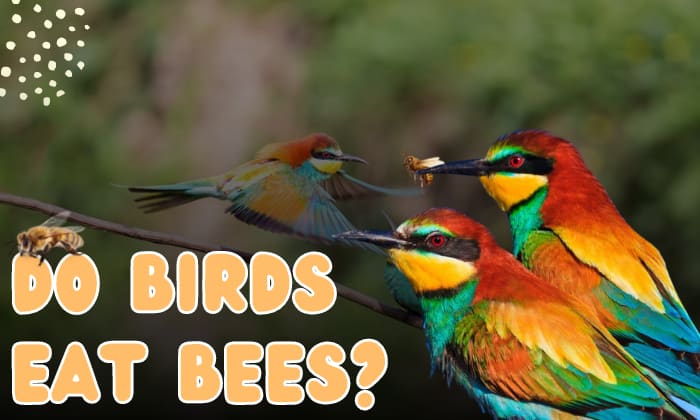 Bees are tricky insects to eat because they are small, fast, and can sting! But do birds eat bees?

Surprisingly, various birds with a technique that can catch bees consume them regularly. For instance, Bee-eaters and some Tanagers enjoy eating adult bees, which make up 60 – 70% of their diet.

Meanwhile, species such as northern cardinals, woodpeckers, robins, and other birds eat them only when the opportunity presents itself.

What kind of bird eats bees, and how do they do it without getting stung? Do they actively search for bees or only eat them when the opportunity arises?

Here is a rundown of several different bird species and their bee-eating habits: 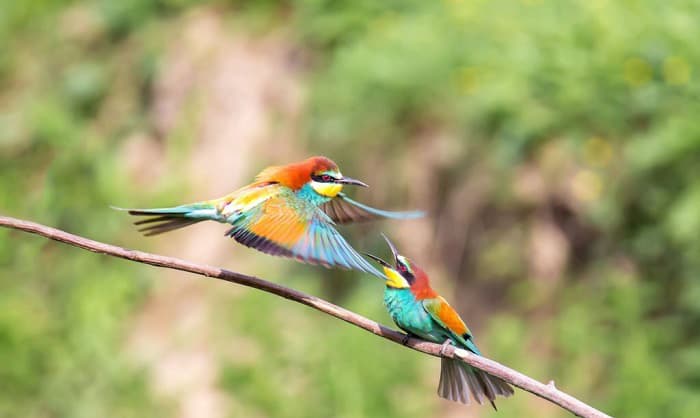 Some birds consume bees and wasps as part of their regular diet. These include bee-eaters, summer and scarlet tanagers, and the honey buzzard.

As their name suggests, the birds are called bee-eaters because they eat bees and wasps – enough to fill 70% of their dietary needs. The most popular species is the European bee eater.

They are equipped with long, curved beaks, quick reflexes, and excellent eyesight perfect to catch bees and other flying insects midair.

There are 386 recorded species of tanagers. Of them all, 2 in particular regularly eat bees: the summer tanager, and the scarlet tanager.

However, as a fun fact, summer and scarlet tanagers have been reclassified as part of the cardinal bird family. They are technically not part of the tanager family anymore, despite it being their species name!

Regardless of classification, summer and scarlet tanagers are on the list of birds that eat wasps.

Like other bee-eating birds, these medium-sized songbirds follows the technique of smashing bees and wasps against a hard surface to kill them.

They then rub the dead bee against the ground to remove its stinger. Only then will the scarlet or summer tanager eat the bee or wasp.

Scarlet and summer tanagers are found around North and South America.

The honey buzzard is a large bird that enjoys small prey. Their diet consists of small rodents, birds, reptiles, and insects – including bees and wasps.

However, the species is known to consume larvae instead of adult bees. They break open nests using their sharp talons and enjoy their feast, ending with sweet beeswax for dessert.

They are perfectly-equipped predators of bees with hard, protective scales around their eyes and forehead to protect them from stinging. These scales also cover honey buzzards’ legs and feet.

Scientists also suspect their feathers and scales may release a chemical that naturally wards off bees, wasps, and even hornets.

There are many species of honey buzzards scattered all over the world. They are found in Asia, Eurasia, Europe, and Oceania. 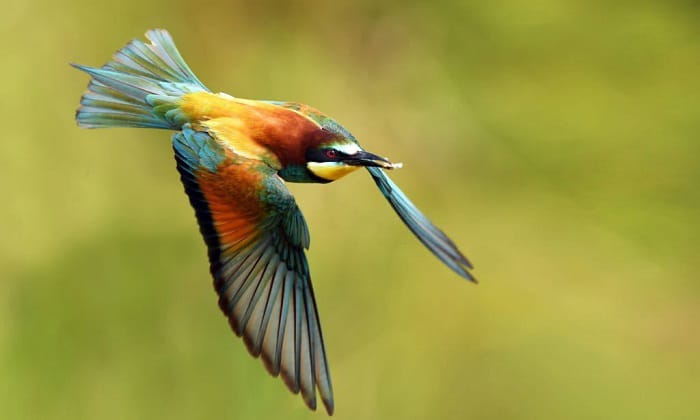 Purple Martins are quick and agile – perfect for catching prey and small, fast insects. The birds eat bumblebees, but will also eat wasps occasionally, as well as flies, and dragonflies. Amazingly, they even eat fire ants.

The Northern Cardinal diet changes depending on the season. Generally speaking, they tend to eat insects and more protein during the mating and breeding season between March and September.

During those months, they happily eat whatever protein they may come across, including grasshoppers, beetles, caterpillars, spiders, flies, bees, and wasps.

Read more about characteristics, behavior, shape, … and most of all this bird also represents some states in the US, for example:

Woodpeckers generally only bee-eaters when no other food source is available. As is the rule in nature, they are willing to do whatever they must in order to survive.

Their regular diet consists of what they can find in trees: ants, termites, beetles, spiders, small rodents, fruit, nuts, and sometimes even bird eggs.

Robins mostly eat worms, fruit, and seeds. However, they will eat the occasional bee and other insects if the opportunity presents itself.

How Do Birds Catch Bees?

Birds eat honey bees by catching bees in mid-air, either by chasing after them or ambushing them from a branch. Most birds then smash the bee against a hard surface and rub them a few times to remove the stinger and venom sac.

People have shared stories of crows, in particular, smashing the bee’s head so hard against the ground it becomes decapitated before getting eaten. 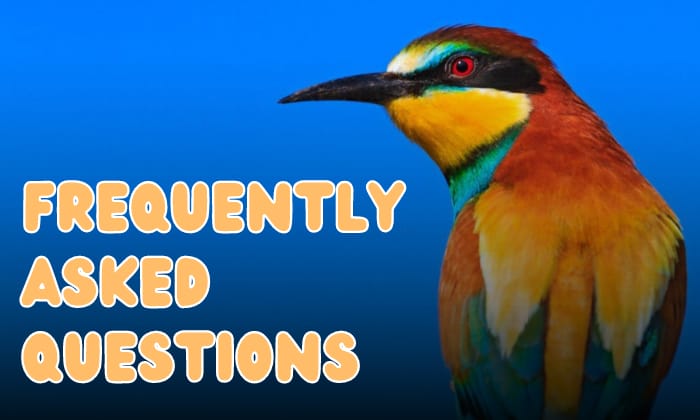 Do most birds eat bees?

Birds mostly eat whatever they can find in order to survive, whether it be fruit, vegetables, or meat.

As such, most birds are willing to occasionally eat bees but not all of them eat them on a regular basis. For example, pigeons eat bees too even though they are mostly herbivores.

Several birds, however, decidedly do not eat bees. These include hummingbirds and sparrows, to name a few.

Are bees threatened by birds?

The bee population is not threatened by birds. Generally speaking, their numbers stay in the balance due to the natural order of things.

Bees are much more threatened by other factors such as climate change, habitat loss, invasive species, and pesticides.

Are birds affected by bee venom?

When a bird eats bees, it normally takes the stinger out as soon as possible to protect itself. Most bee-eaters also have natural protection to keep them safe.

Sadly, when birds get stung by bees, particularly birds not used to them, it can result in fatality.

An experiment on pigeons showed they succumbed to the venom of multiple bee stings. People on Quora have also shared stories of spotting birds in their backyard in shock from receiving bee stings.

Nature has a wonderfully structured food chain that describes how energy is transferred from one being to another. The setup ensures that each animal is capable of consuming one smaller than itself while getting the nutrients it needs.

Do birds eat bees? Some do, and some don’t. But whatever each bird does consume is related to the cycle of nature and to the greater scheme of things.

While bees are in dire need of protection, don’t panic if you see birds eating them. More than anything, bees need protection from humans, not avians.