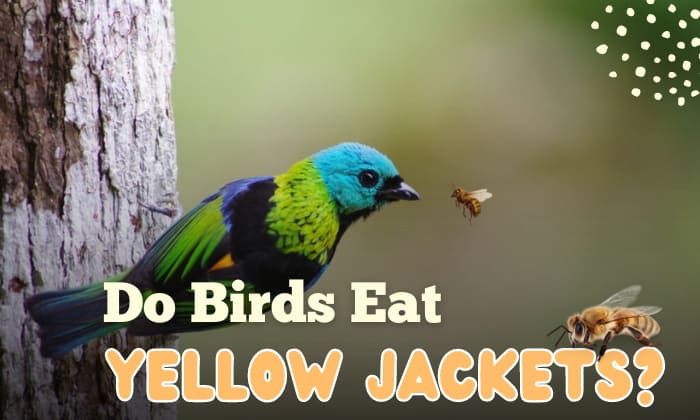 If yellow jackets are becoming a problem in your place, learning how to keep these aggressive insects at bay would be your top priority. One option you’ll find on the internet would be attracting a bird that can eat wasps.

However, do birds eat yellow jackets? Yes, but not all birds. Birds such as tanagers, gray catbirds, goldfinches, warblers, sparrows, and bee-eaters make these insects part of their diet.

All About Yellow Jackets and Birds That Eat Them

Like most wasps, yellow jackets are known for their territorial behavior and predatory actions. Their yellow markings look similar to bees, so many people often mistake yellow jackets for the latter.

Yellow jackets are dangerous, especially when disturbed or threatened. Their aggressive nature is what they’re known for, often displayed through their repetitive stings that can trigger severe allergic reactions.

Humans are not spared from the yellow jackets’ hostile behavior. Many people wouldn’t even dare come close to these aggressive wasps for fear of experiencing their painful prick.

For us, the pain may come with an itching or burning sensation at the site, which may last for one to two hours. Although the redness may start to fade within three days, the swelling may go on for seven days.

Interestingly, some dauntless birds prey on these predatory insects. These wasps are healthy for young avians since they are very high in protein.

Still, many people find it absurd that a bird eats wasps like yellow jackets without getting stung. It’s a reasonable thought, since yellow jackets’ stinger can cause unbearable pain to their victim upon contact. However, the answer lies in a bird’s anatomy.

Unlike mammals, including us humans, birds have beaks instead of teeth, requiring them to swallow their food instead of chewing it. Hence, the chances of getting their tongue or mouth stung are unlikely.

Furthermore, the yellow jacket’s stinger is too long to pierce into a bird’s stomach wall, which makes it entirely harmless once digested. The sting will also be expelled as waste later, a process that further neutralizes it.

That said, some birds will break off the stinger before eating.

Some birds eat hornets and wasps as part of their diet.

For example, tanagers, mainly the summer tanagers, enjoy hunting yellow jackets, wasps and hornets, then snacking on the larvae on their nests.

Yellow jackets and their larvae are rich in protein, making them (including other insects) a source of nutrients for tanagers.

With their incredible speed and skill, tanagers can capture yellow jackets midair, stunning and removing their stingers before feeding on them.

If you want to attract tanagers so they can feed on the yellow jackets in your area, keep tall trees and berry bushes nearby. Fruits on feeders placed on higher sites also increase the chances of attracting tanagers.

Gray catbirds are recognizable due to their distinct mew. These avians like to live in dense vegetation and will eat yellow jackets if they come across these insects. Other foods they enjoy are beetles and ants, and you can attract them by planting dogwood trees.

Besides their fruit diet, blue jays hunt and feed on insects, including wasps like yellow jackets. They may even destroy the nests to consume the larvae. 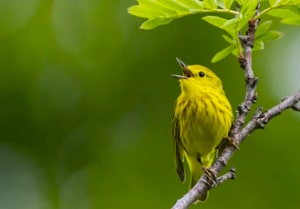 Warblers are bright-colored berry and insect eaters that enjoy eating beetles, dragonflies, and even aggressive yellow jackets. If you want to draw a warbler to your lawn, you’ll have to keep berry bushes or any plants that can attract insects.

Apart from being a bird eating bug, chipping sparrows eat yellow jackets from time to time.

You can attract these avians by putting the right foods in your feeder. Mealworms, cookie crumbs, and pecans will work well, as will millet. 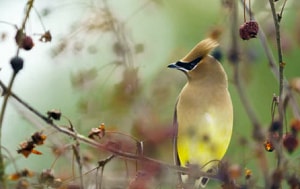 Although yellow jackets aren’t their primary food source, the cedar waxwing occasionally feeds on these wasps.

Since they prefer fruits and berries, keeping berry bushes and fruit trees nearby will help attract these sometimes-insect eaters.

How To Identify a Yellow Jacket?

As their name denotes, yellow jackets have distinctive yellow, sometimes white, markings on their hard shell, which may appear similar to the bees. However, they have no fuzz or hair, making their body look shiny.

Apart from their appearance, yellow jackets typically grow around 1.2-1.9 centimeters, live in groups or clusters, and can fly fast and aggressively.

Do Birds Help Keep Wasps Like Yellow Jackets Away?

Most avians avoid wasps like yellow jackets since they’re known for their territorial and aggressive nature. However, attracting birds that eat yellow jackets near your house, garden, or lawn should help control these insects.

How Do You Get Rid Of Yellow Jackets At Your Feeder?

There are other ways to get rid of yellow jackets at your feeder besides creating a habitat to attract insect-eating birds in your area.

What Eats Yellow Jackets Nests in The Ground?

Since birds dwell midair or in high sites, you might wonder what could get rid of yellow jacket nests or eat wasps nests planted on the ground.

Although hummingbirds eat insects as part of their diet, no evidence has proven their fondness for eating yellow jackets, so it’s best not to count on hummingbirds to eliminate these predatory wasps.

Do birds eat yellow jackets? Some birds do!

Although most birds avoid yellow jackets, brave ones like the tanagers, gray catbirds, blue jays, warblers, sparrows, and cedar waxwings enjoy these predatory insects and their larvae.

Hence, the next time you find yellow jackets in your area, having these birds around should help you deal with your pest problem.