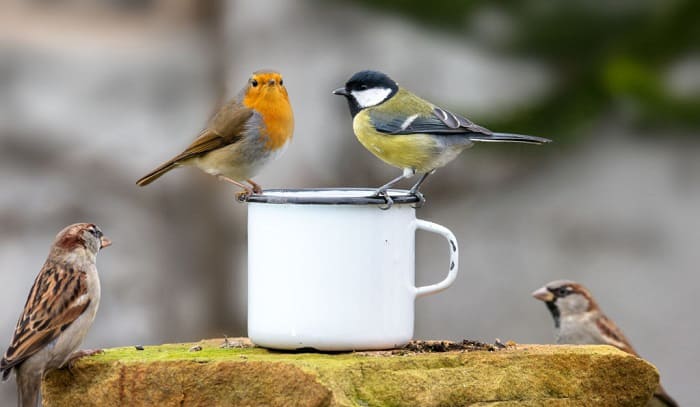 Birds are not only an animal with many meanings behind it, but also a very intelligent species. Some birds can solve a puzzle, do math or move to music, while others can use their creativity to craft colorful berries and fragments to attract female birds’ attention.

For those who love nature and birds, learning about birds is always exciting. So, today we’re going to explore an interesting topic: birds with 4 letters in their name.

In this article, we will list out many types of birds with 4 letters in their name. This list includes familiar four letter birds names: dove and hawk, or possibly endangered species like ibis and kiwi. 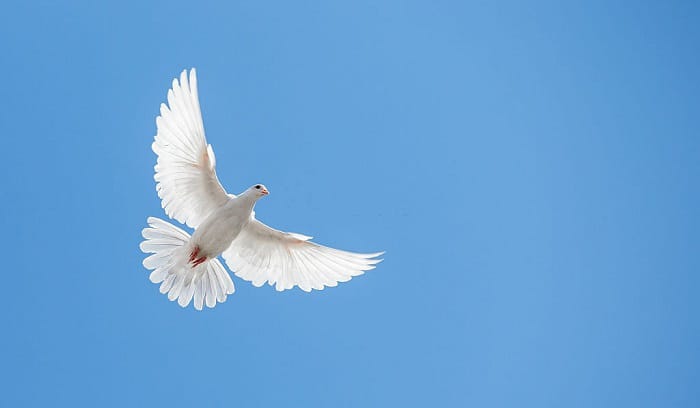 Dove is famous among four letter bird names. Doves generally have a smaller head when compared to their body, and their beaks are small and narrow. Doves have short legs and a long tail, so their bodies often sway back and forth when they walk. Commonly seen colors are white, gray, brown and peach. Doves are famous for their powerful, precise flying pattern, and the whirring sound from their wings.

Water is essential for birds’ survival, and doves have an innate ability to drink without lifting their heads. To fulfill its high caloric requirement, an ordinary ground dove consumes around 2,500 seeds everyday. Doves browse for seeds by wandering and scratching the ground, but the majority will not scavenge in litter to find grains and seeds.

Other species consume berries, while white-winged doves feed snails for calcium as well as tiny stones to crush plants in their gizzards. Doves dwell in open woods, cities, and some species reside in thick forests. They may frequently be spotted sitting on power wires and tree branches.

In the spring, male and female doves build their home with grass, leaves, and pine needles. Doves may lay numerous clutches of eggs in a single mating season and will recycle nests to rear their babies. They also utilize nests that have been vacated by other birds.

The eggs are incubated for two to three weeks by both parents. Once the young are hatched, they will be fed crop milk, which is a fluid formed in the esophagus of parent doves. 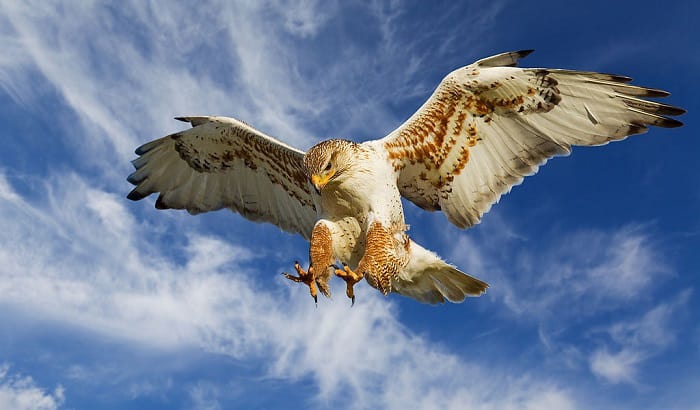 Hawk is another on this list of 4 letter bird names. It is a catch-all name for a wide group of Falconiformes (birds of prey). Except for Antarctica, all continents are home to about 270 hawks species. Hawks dwell in a variety of environments, including marshland, woods, rainforests, meadows, open scrublands, highlands, and coastlines.

Some hawk species, such as the Cooper’s hawk, are threatened by chemical contaminants, which damage the eggs. Other problems affecting hawk life in the wild, including the loss of nesting sites, excessive hunting, and collisions with automobiles.

The size of a hawk varies according to species. The American Kestrel is the smallest, weighing only 0.25 pounds while the heaviest hawk (Ferruginous Hawk) can weigh up to 5 pounds. Hawks have pointed talons, a big, curved beak, and strong legs. They have exceptional vision which is eight times that of humans. A hawk can spot its target from a distance of 100 feet away and unlike many other animals, hawks can perceive various colors.

Hawks are diurnal creatures meaning they are active during nighttime. They primarily prey on amphibians, insects, rodents, snakes, and small birds. Hawks can plunge in the air at speeds of up to 150 miles an hour while hunting. They can grab prey in the air as well as on the ground.

Hawks mate at various times of the year, based on the species and geographical region. Many hawks mate around the end of wintertime or early in the springtime. 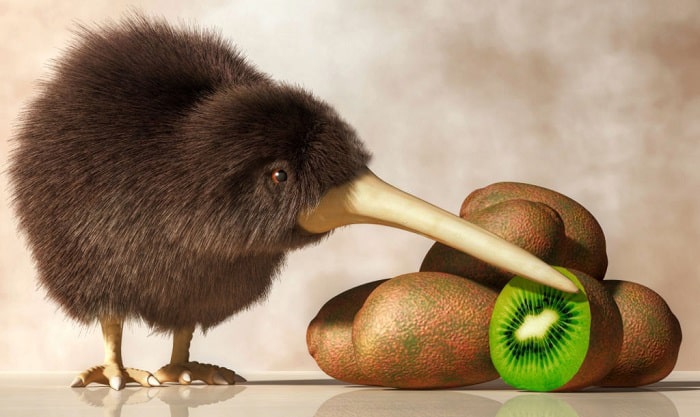 Kiwi is a bird but shares many features of mammals. Although they have wings, they cannot fly and their feather-like plumage changes color all year round. The kiwi has a very sensitive sense of smell and it is the only bird in the world with a nostril at the end of its beak. What makes kiwis even more distinctive is that female kiwis have two ovaries while other birds only have one.

Kiwi birds are nocturnal birds, when night falls they will go out in search of worms, insects, fallen fruit, and other plants. Although kiwi birds are not taught how to feed by their parents and just follow their instincts, they are gifted with keen senses.

While nocturnal birds often have large bright eyes to hunt at night, kiwi birds use their excellent sense of smell to sense everything around them. In addition, they have very good hearing and sharp beaks to dig into the ground and find food in the soil or piles of leaf litter.

It takes about 16 months and three years for birds to reach sexual maturity and begin breeding. Breeding season is typically from July to February. One kiwi egg makes up about 15% of the female’s weight. The male is responsible for the incubation of the eggs for a period of 74 to 90 days.

Kiwis are most threatened by ferrets and ferrets, followed by cats and dogs. According to statistics, only about 5% of kiwis that hatch in the wild can safely survive to adulthood.

Have you ever seen a baby kiwi bird? Check out the video below! 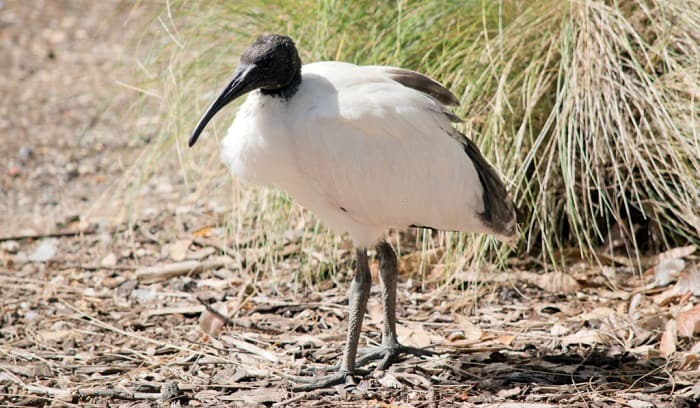 The white ibis stands around two feet tall and has a three-foot wingspan. Apart from its black-edged wings, it is completely white. Its black-tipped wings are not visible while the ibis is resting, but they are apparent when the bird is flying. The ibis has a long, downward-curving red-orange bill and an orange-red face. Their legs are normally gray but will turn orange-red during the breeding season.

The white ibis inhabits the Atlantic coast from Virginia south to Florida and along the bay west to Texas. In addition, they are also found in Central America and Mexico.

The white ibis gather in huge flocks to nest and eat; thousands of birds may nest in a single colony. In order to find food, the white ibis may travel up to 15 kilometers each day. The white ibis feeds by wading in the water, turning its head to the sides and using its long, curved beak to find crabs and shrimp in the mud. In addition, it forages on land for frogs, snails, worms and insects.

Usually the male will find a suitable place to breed, start hunting, and point his beak to the sky to attract the female. They will then begin to build nests together in the bushes or on the ground. The female lays about 2 to 5 eggs at a time, and both parents take turns incubating the eggs. After 21 days, the eggs will hatch. 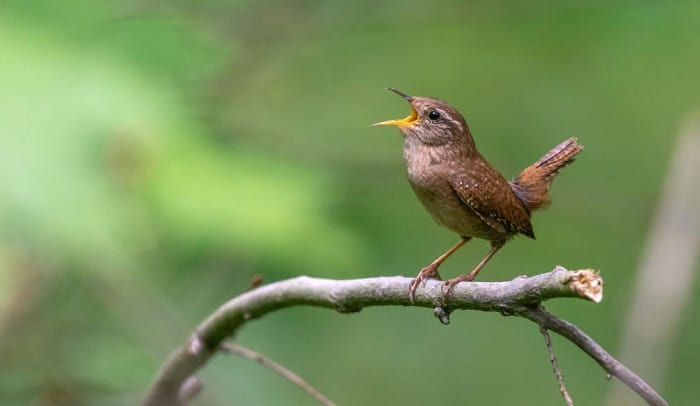 The last bird on the 4-letter bird names list that we will learn about today is the wren bird. The wren has a stocky, round body, a short stout tail, and a distinctive brown color. They have long, creamy legs.

This cute looking bird is very popular in the UK and is often seen in gardens year round. Contrary to the small figure, the wren is quite noisy. During the long, cold winter months, wren populations can drop dramatically.

The wren’s food in the wild is usually insects and spiders, which succumb under its long pointed beak in cracks and crevices. This bird also feeds on garden feeders, which include a mixture of legumes and seeds.

The wren begins its breeding season in late April and lasts for about 13 to 18 days. The wren’s eggs are white, have a smooth shell, and are dotted with pale pink spots. Both the mother and father will take care of their chicks together.

You can watch this video by Wildlife World to hear how powerful the song of the wren bird is!

Birds spelled with 4 letters can be species you see often or endangered. This article not only lists four letter birds names but also talks about the characteristics of each species to illustrate how rich nature is.

Besides the birds mentioned above, can you think of any other names? Please share with us!