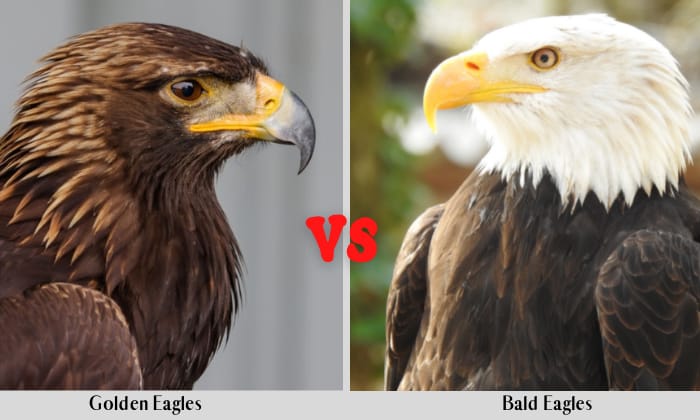 Golden eagle, bald eagle, harpy eagle, white-tailed eagle, crowned eagle are all considered as king of the sky and a symbol of loyalty, strength, devotion, and honor. Eagles are renowned as furious birds of prey that have almost similar outer looks and wildlife habitats among different species, especially a bald eagle and a golden eagle. 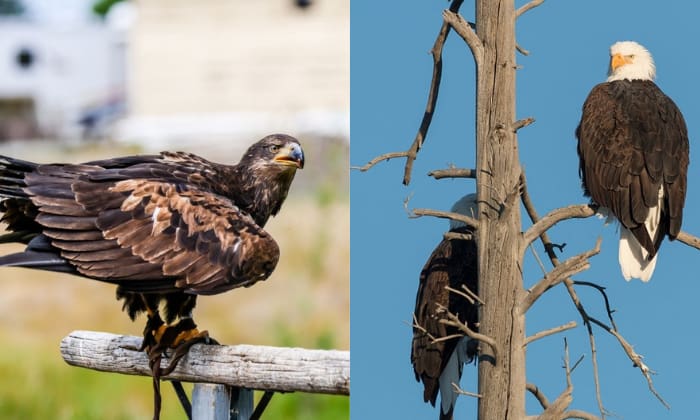 Most people mistake bald eagles for golden eagles and vice versa for their appearance because the difference is very subtle.

Golden eagle size compared to bald eagle: Golden eagles tend to be smaller than bald eagles and the female is usually larger than the male.

A fully grown bald eagle is measured from 28 to 40 inches in length and from 2.5 to 3 feet in height whereas a golden eagle has a body length from 27 to 33 inches and can grow up to 3 feet tall. The weight gap between them is very minimal and not worth bothering about.

Generally, most bald eagles have dark brown bodies and wings along with pure white heads, necks, and tails. The most prominent part is probably their bright yellow beak and bare feet, which are equipped with very strong and spiky talons.

On the other hand, a golden eagle’s head, wings, and tail are bluish brown and sometimes grayish brown or rich brown overall. Their belly, underside wings, and nape of neck have the same brown tone but are slightly lighter. Most of them also have pale brown or yellow feet that are wrapped with feathers, and this factor is a little bit difficult to recognize.

If you pay attention, you will see that the fur on a golden eagle’s head along the neck is shorter and has nearly the same color as the body. In contrast, a bald eagle has a spotlessly white head and neck, which is totally opposite to the dark brown body. Moreover, its fur is a little bit longer, pointed out and covers a small part of its neck.

Bald eagles have longer and bright yellow beaks while golden eagles have shorter and narrower beaks in width that are yellow and black on the outer part, which is easily noticeable in spotting golden eagles compared to bald eagles.

Golden eagles have thinner wings in width that makes their wings may seem longer but actually, they happen to have smaller wingspan than bald eagles. A bald eagle wingspan is measured about 204 centimeters while a golden eagle’s is more than 180 centimeters

The most ideal time to observe their tails is when they are perching and don’t make any movement. Most of the time, while the tail of a bald eagle is entirely white, a golden eagle’s tail has a white base with a black or dark brown terminal band at the rounded end. 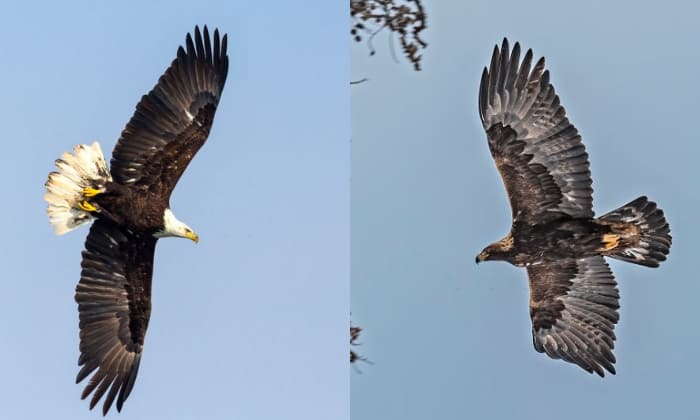 Bald eagles fly directly with their long and slightly rounded wings, which are held horizontally. They typically flap their wings slowly during steady flights.

Instead of flying with straight out wings like bald eagles, golden eagles glide through the sky with their large wings formed into a slightly wide “V”.

Having a slower wingbeat, bald eagles usually glide at a speed of 120 to 160 km/h, which is half compared to golden eagle’s average speed. Small birds of prey like the golden eagle are surely one of the fastest raptors in wild life. Even if they are hunting or not, they always span their wings soaring at 320 km/h, a surprisingly high speed for a bird of prey. 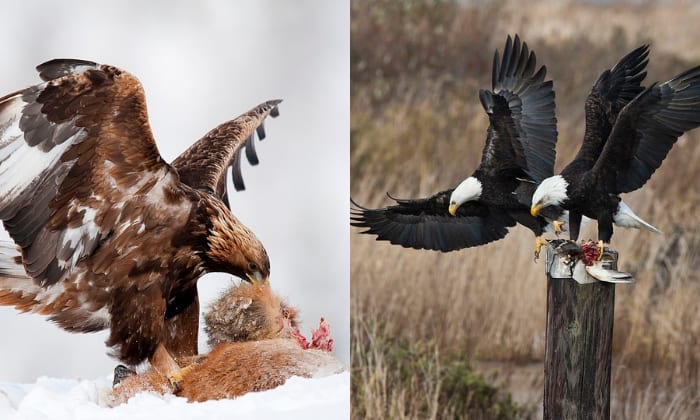 Bald eagles are designed to eat fish most of the time, especially salmon. However, when fish are not available, they will eat something else that they see right away, which usually includes small birds and rodents.

Apart from fish and other birds, which are also the majority in the golden eagle’s diet, they prey on medium-sized reptiles, rabbits, squirrels, and they can even take down an adult deer. After a successfully full meal, gold eagles can survive without food for several days until their next meal. 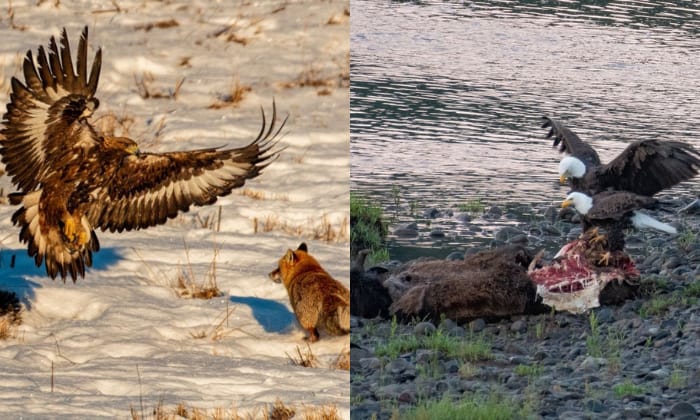 The golden eagle uses a number of hunting techniques depending on weather conditions, different areas and most importantly, the prey. They are always ready to attack whether they are perching or in flight. In nature, golden eagles are normally more violent than bald eagles.

Thanks to their excellent eyesight, they can spot the prey from miles away, in color and very clearly. Those eyes are big, very keen, and have way better vision than humans do, which makes them excellent hunting raptors.

Golden eagles often hunt in pairs or a small group. They will take turns waiting and driving the prey to their partner. During that process, they hold and kill the prey with their sharp talons and eat them with their beaks.

Like golden eagles, bald eagles have excellent vision. which helps them notice their prey from a tall perching spot or even high in the sky. Since fish is their favorite meal, they spend most of their time soaring around waterfalls, rivers, and oceans.

By using solid and strong talons, bald eagles easily grab the prey from underwater and hold tight without dropping despite how slippery the fish is. After that, instead of gobbling the prey immediately, they will fly to their nest or somewhere desolate and enjoy their meal. 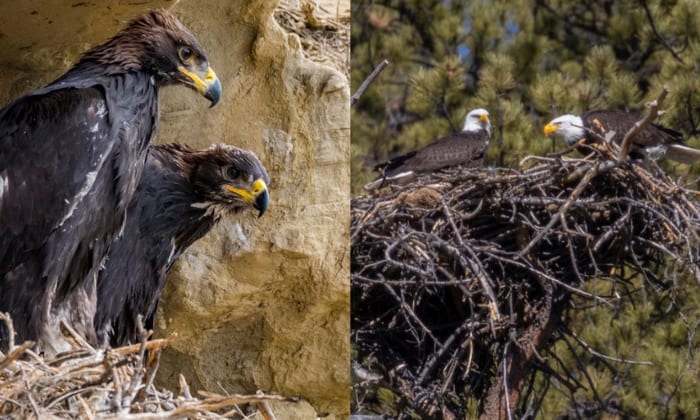 Golden eagles build several nests in a particular area and they live together in pairs. Their nests, which are usually built from plenty of grass and big branches, are located on tall trees and cliffs. Annually, the female golden eagle will lay eggs from January to May. and there are about 2 eggs at a time.

Bald eagles pull together lots of materials. such as branches, twigs, moss, grass and feathers to build a large nest. Every year, these birds will return to add even more materials to their nest which make it bigger as time goes by.

This is also where female bald eagles lay from one to three eggs each year and alternate with their partner on keeping them warm until they are ready to hatch. The egg laying process mostly begins in November, however, the timeline still depends on where they live.

After hatching, baby eagles are called eaglets. Growing up, sometimes they even fight and harm each other for food. Therefore, not all eaglets that are hatched can survive or expand their life-span.

Golden eagles vary from several high mountains to dense forests in countries around the world but they are particularly populous in Mexico and North America and a few of them can be distributed throughout Asia, Northern Africa, and Europe as well.

For bald eagles, they are originally North American birds and they range from the border of Mexico and America all the way to Canada. They are also often seen in far-reaching places such as Alaska, Rocky Mountain, the Mississippi River, and along the East and West coasts.

To sum up this article on golden eagles vs bald eagles, eagles are powerful raptors and exclusive carnivores that are excellent in hunting. When it comes to telling them apart, it might be challenging at the beginning but the key is observing their color pattern carefully.

You will see that a bald eagle generally has more expansive white on its head, nape of neck and tail than a golden eagle. Their difference in body shape, size, and habitat is very subtle so usually there is no need to consider.

Eagles always make the crowds praise and get most of their attention anywhere, whether it’s in the wild or at a city zoo. By memorizing the key information above, hopefully you can tell the difference between a bald eagle and a golden eagle whenever you have a chance to see them.

Besides, discover other articles about the differences between bird species: