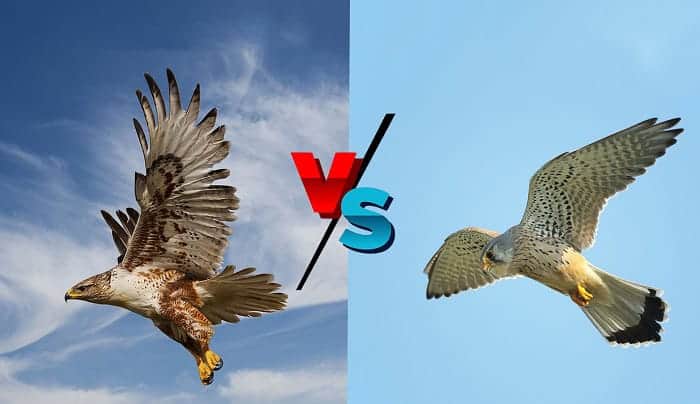 Hawks and falcons are birds of prey often seen flying high up in the sky and diving straight into prey. It will be challenging for you to tell the difference between hawk and falcon if you only know little about them because overall, they look no different.

These two birds vary considerably in features, such as physical appearance, flight pattern, hunting habit, food, etc. I will cover each of the falcon versus hawk features specifically for you in this article on hawks vs falcons: what’s the difference?

Generally, most hawks have reddish-brown or dark brown heads and wings along with a pale belly and wing underside. The tail is long and usually darker. Their feet and upper part of the mouth are chiefly light yellow.

On the other hand, a falcon’s head and back are dark gray and sometimes greyish blue. Its wings have the same color tone but are lighter, and its neck is pale and white. Most falcons also have black and white stripes and patterns on their belly and wing underside.

The most prominent feature of the falcon is probably their bright yellow eyelid, upper part of the mouth, and feet.

Hawks have wider wings with rounded ends, where there are about five feathers that are open and separated, which look like fingers, whereas falcons have long and slim wings that are hinged like the elbow and pointed at the end. By distinguishing their wings’ shape, you can effortlessly identify which one is a hawk or falcon while they’re gliding through the sky.

The falcon’s head is rounded and looks like a circular shape, while hawks have a pointed head that is slightly flat on the top. If you take a closer look at the photo above, you will surely see that falcons have a notch or angular bend on their beaks while hawks have a simple curve on theirs. Next, check out this video for an overall view of the following features:

Hawks have a bigger wingspan than falcons do. Since a hawk’s habit is soaring in the sky, it always spans its broad and straight wings. Hawks often glide in the air with their wide wings flapping slowly. For falcons, they flap their wings rapidly as they glide for a short distance.

Even though falcons have narrower wings, they fly much faster than hawks do. Hawks soar at 190 km/h while falcons’ average speed is about 390km/h. A falcon’s small body shape and pointed wings are for high speed. 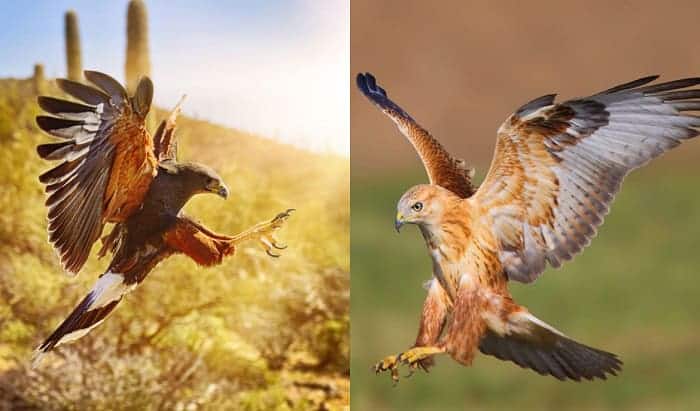 Birds of prey, like hawks and falcons, have some of the sharpest eyesight in the animal kingdom. They can see greater distances than humans to spot their prey and even small details from more than one mile away. According to sciencedaily.com, under the same conditions, Harris’s hawk can see 77 Hz (blinks per second) and a peregrine falcon can see 129 Hz, while humans see no more than 50-60 Hz. Having astonishingly fast vision enables them to approach the prey in no time effortlessly.

Falcons prefer to hunt remarkably high in the sky. Therefore, they often do something called a stoop, which is when they soar extremely fast downwards, aiming the prey on the ground.

Thanks to their excellent eyesight, falcons don’t have any difficulties tracking the prey from below although they always attack from high altitudes.

On the other hand, hawks hunt by perching upon high objects, such as fences, branches, cell phone towers, and electric poles and waiting for the perfect time to kill their prey.

Being equipped with strong and sharp talons, hawks compress their prey effortlessly and kill them with dangerous claws. Hawks usually eat mammals, such as lizards and snakes, rabbits, and mice.

At the same time, falcons use their spiky talons to catch and hold the prey and afterward kill them with their beaks. Falcons are designed to eat animals that are in flight such as pigeons, dragonflies, bats, and other birds. In nature, hawks tend to act more aggressively than falcons do. 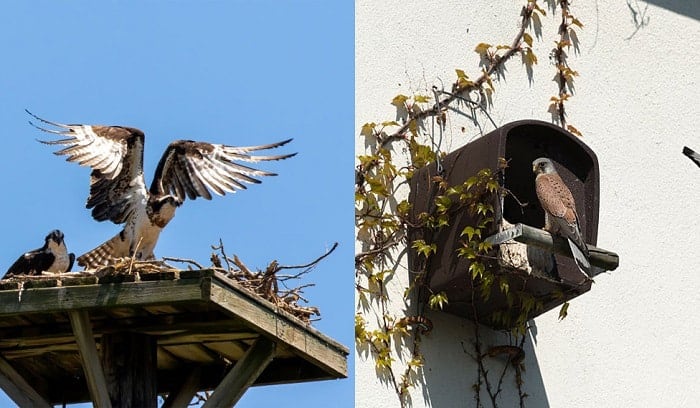 Hawks’ nests are typically built in the branches of tall trees where it is airy and a broad view of the landscape is available. They may also put their nests on cliffs and even chimneys, window sills, and billboard platforms.

Adversely, falcons usually have their nest site on cliffs, for example, the Grand Canyon. They may stay in old existing nests of other large birds in trees and artificial constructions like buildings and bridges.

Falcons don’t take any material to build their nests. Instead, the female bird picks a nest site and uses its foot to scrape a shallow hollow in the ground or sand. On top of the hills and mountains are where falcons frequently gather around too.

Every year, mother hawks lay between one to five tiny greenish-white eggs, and it takes 28 to 32 days for the eggs to hatch. This process occurs in early spring from March to May, which is after the mating season.

The falcon’s egg-laying process is similar to the hawk’s except for the color of the eggs. Their eggs vary in color from pink to reddish-brown and are slightly smaller than chicken eggs. Moreover, both male and female falcons share the incubation process, which lasts about one month.

There are plenty of species among hawks and falcons, most of which are commonly found in North America. Here are some of the representative species:

Furthermore, the average lifespan of a hawk is 14 years and a falcon is 19 years.

Hawk vs Eagle vs Falcon

There is another bird that you might be mistaken for a hawk and a falcon, which is an eagle – one of the most furious hunting birds in the animal world. Most eagles have a body length of about 40 inches, which is nearly two times bigger than a falcon. They can spot another bird soaring from 50 miles away as they have a very keen and attentive vision.

The easiest way to recognize eagles is by taking a look at their appearance: an adult eagle has a rich dark brown body and wings, along with a white head and tail. It also has bright yellow legs and beaks as well as rounded curves on the sharp talons.

In conclusion, both hawks and falcons are competitive carnivores and powerful raptors that possess little differences in physical appearance, flight patterns, hunting habits, nest sites, and species. Although they look similar to each other in many ways, it is not that hard for you to distinguish them. One of the easiest ways to nail the hawk vs falcon identification is observing them while they’re in full flight and you can witness their wingspan.

Hopefully, my article on hawks vs falcons: what’s the difference satisfies your curiosity and from now on, you can easily tell them apart whenever you see them at a national bird park or somewhere in the wild.