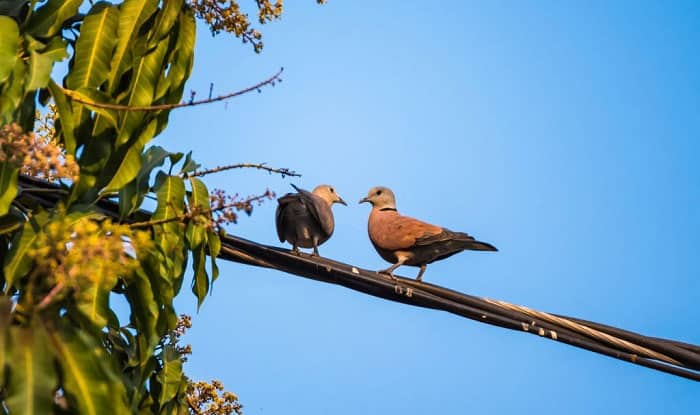 We frequently notice warnings warning of an electric shock hazard while approaching power lines, particularly high voltage cables. However, we often observe a large number of birds sitting on power wires. Have you ever wondered how can birds sit on power lines? And why do they like to do so? Let’s look at the fascinating facts underlying this occurrence in the article below!

What is it about birds that seem to defy the laws of electricity? The reality is about the displacement of the electric current, not the birds. Because electricity always wants to flow to the ground, if the birds are not in contact with the earth or objects that touch the ground, the electricity will simply remain in the wire without affecting the birds.

Birds have a better perspective when perched on power wires, allowing them to forage or escape predators. Furthermore, if they sit near each other when the weather becomes chilly, they will feel warmer.

There Is No Insulation on Power Wires

There are several misconceptions about why birds may safely sit on power lines, ranging from avian anatomical specialization to insulated wires. It is a misunderstanding that all electrical wires are insulated with a shock-absorbing coating. In fact, the coating on cables is for weather-resistant purposes only and it will not provide any safety against an electrical charge.

How Does Electricity Work? 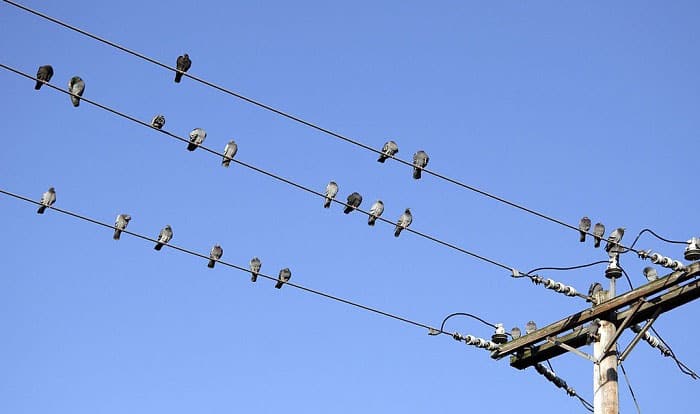 Electric current, or electrons, must be in contact (or in the vicinity) of conductive material with at least two distinct potential points in order to travel from one location to another. Charged particles will tend to attract lower potentials. That’s why it is believed that electricity tends to go to the ground, where there is a lower potential.

How Can Birds Sit Safely on Power Lines?

When birds stand on power lines, they do not provide a path for the current to flow to the ground, or move from a place of higher voltage to a place of lower voltage, so the birds are not electrocuted when current is moving. Moreover, while power wires are made of copper, which is known as an excellent conductive material, bird tissues and cells, like those of other animals, are weak electrical conductors. Therefore, the chances of a bird being electrocuted while sitting on a power line is very low.

On the other hand, when birds land on power lines but suddenly spread their wings and hit a pole or a nearby tree branch, then they inadvertently create a path for electricity to travel to the ground. According to Edison International reports, birds can be electrocuted in this case. In other cases, if the bird touches both conductors at the same time, the current passes through its body, and as a result, it is electrocuted.

Therefore big birds such as eagles, hawks, and owls are more vulnerable than tiny songbirds perched on power wires. Because of their large wingspan, raptors are more prone to collide with two wires while landing or taking flight. It is more probable that one of their wings may touch against an utility pole when they arrive on power wires. There have been numerous reports of raptors getting shocked in the United States’ deserts. This is because power wires are often the highest and convenient spots to perch.

Regarding the ability to transmit electricity, birds are not any different than ourselves. According to Sciencing, if a person held onto one power cable without letting any part of their body contact the land or another surface, the outcome would be the same as when birds sit on wires.

Why Do Birds Perch on Power Lines?

Have you ever wondered why birds do not choose among many other safer places but choose to perch on such dangerous power lines? The answers are:

When it comes to finding food, power lines provide an excellent viewpoint for birds.

The birds get an unobstructed view of things below while perching high on a power line. As they sit and gaze about, they may simply use their excellent vision to locate any possible sources of food. They can see insects below and locate any berry or nut-yielding trees that may be of interest from their vantage point up high on the electricity wires.

They are safe from prey animals.

Birds are safe from ground enemies such as foxes, dogs and cats because they are high on power wires. Birds are frequently seen perched on power wires in areas where there are few trees. The power wires keep birds out of reach of many attackers.

Although birds can avoid enemies on the ground, they are unlikely to escape enemies that can climb.

They are given more warmth.

When the temperature lowers, birds like to retain body heat by staying together for hours. Because electricity wires are somehow warmer, they offer an excellent perching spot for birds to simply rest and save calories.

Due to the energy that passes through them, electricity wires are somewhat warmer than the air. Since birds land on electrical wires, they will instantly notice the warmth beneath their feet. This is why, as the temperature drops later in the day, you will notice a swarm of birds perch on power wires.

It is a great place to meet and rest before migrating.

Aside from causing wire damages, birds may cause problems with the electrical system itself, as utility companies are well aware. The issue is widely spread: birds are responsible for nearly one-quarter of all power disruptions in the U. S. Many of them were caused by electrocution. Furthermore, bird feces is frequently caked-on insulators and other electronic components. This can lead to short connections and render the pole dangerous for climbing, causing extra issues for a lineman.

We hope this article explains “Why do birds not get electrocuted on power lines?” or “How can birds sit on power lines?” as well as brings you interesting information about this phenomenon. In short, we can understand that birds can safely land on electrical wires because electricity cannot travel to the ground. In the event that the birds come into contact with another object connected to the ground, they may receive an electric shock. Birds often perch on power lines to observe food sources, avoid ground predators, or simply to stay warm when the weather turns colder.

How often do you see birds perching on power lines in your area? Do you recognize the interesting facts we have mentioned above? Please share with us!

What Are You Looking For?