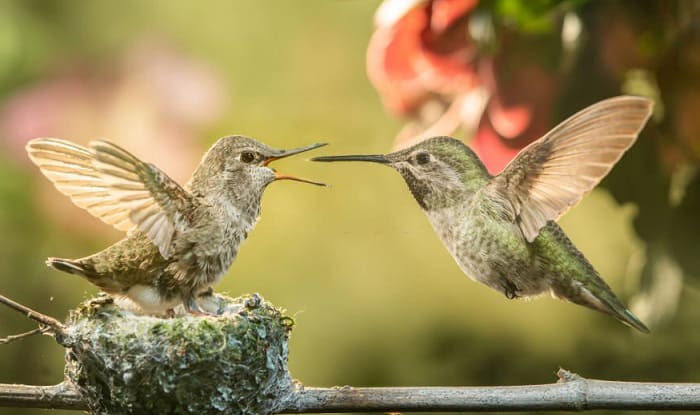 A hummingbird’s diet consists of different types of insects, such as spiders, gnats, mosquitoes, and fruit flies. They also consume a lot of flowers’ nectar, which is rich in sugar – the main source of the birds’ energy.

Newborn hummingbirds depend on their mother for nutrition and feeding. So, how do hummingbirds feed their young? The mother will first pre-digest insects and nectar, store them inside its crop and then regurgitate the mixture into her hatchlings’ throats.

How Do Mother Hummingbirds Feed Their Young?

The mother hummingbird will usually feed their newborns with a mixture of both sugar-rich nectar and insects. Before doing so, she will partially digest the insects for them and then transfer the food to the hatchlings.

Due to their high metabolism, a hummingbird feed its young as often as 2-3 times an hour within their first month of life. Younger birds need to be fed more frequently because they are in the growth and development stages.

At night, baby hummingbirds’ metabolism decreases as they go into deep sleep or torpor to save energy. As a result, there’s no need to feed the babies during this time. This is also the reason why it’s rare to see hummingbirds leave their nest at night.

What Do Baby Hummingbirds Eat? 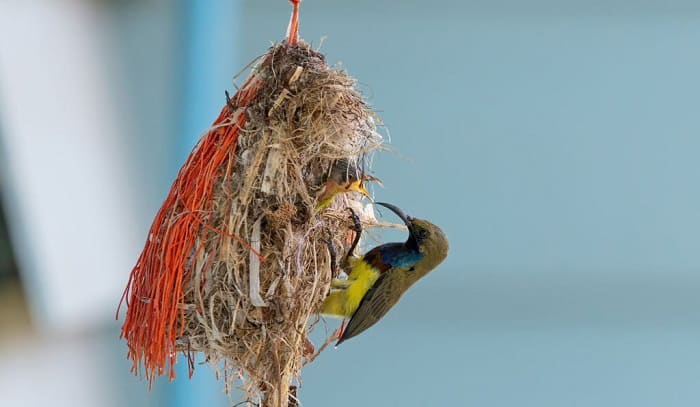 Young hummingbirds drink nectar for energy. However, they don’t solely survive on this sugary substance. In fact, they also require insects such as gnats, mosquitoes, ants, weevils, mites, etc., for minerals and proteins.

When Do Hummingbirds Have Their Babies?

Hummingbirds usually lay their eggs, which take 14-16 days to hatch, in the late spring or early summer when the climate is still warm. As hummingbirds only need 4-5 weeks to fully mature, their mothers may prepare for a second brood during this time.

The survival rate of hatchlings in a cold climate is lower compared to those born in warmer conditions. A cold spell can kill the baby hummingbirds, so you’d see those from cold regions don’t lay eggs as often.

Some hummingbirds, like the Allen species, will start to migrate in December and lay their eggs upon arrival in their breeding location as soon as January. The hatchlings will best survive in a warmer climate, commonly nesting in areas such as California and Southern Mexico.

Why Do You Never See Baby Hummingbirds? 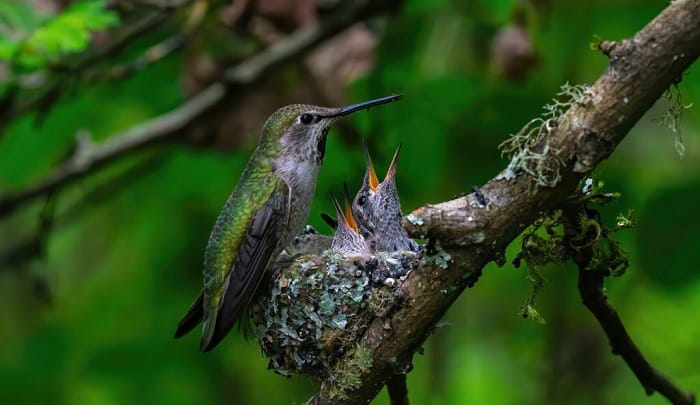 There are several reasons why baby hummingbirds are a rare sight.

Once the fledglings are capable of flying on their own, they leave their nest. Hummingbirds never reuse their nests.

When Do Baby Hummingbirds Leave the Nest?

Hummingbird babies usually stay in the nest for 18-22 days. When they are around 3 weeks old, they can already start the fledgling stage. This is when they practice flying and start to leave the nest but are not completely independent yet.

They will still return to the nest even after flying out several times during the day to look for their own food and explore the world around them. During this stage, they can leave the nest, but their mothers will still continue baby feeding them for another 1-2 weeks. 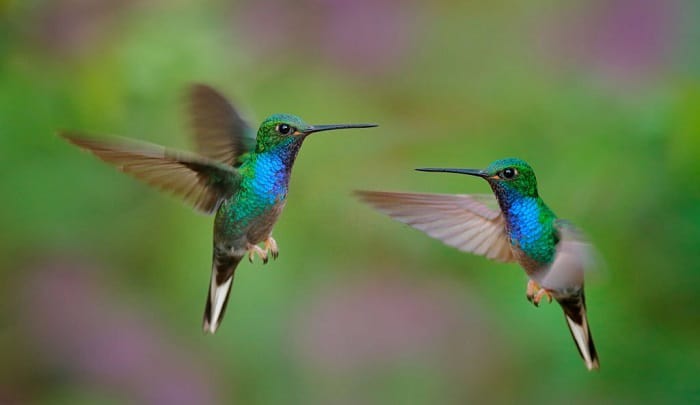 Do baby hummingbirds eat at feeders?

No, baby hummingbirds do not eat at feeders because they cannot fly yet and are not developed enough to even digest their own food. They depend on their mothers for feeding.

The adult will get food from the feeders and then store it in their crops. When they arrive at the nest, they will regurgitate a bolus of food from the crop, straight into the babies’ throats. This is the way all mother hummingbirds feed a baby hummingbird.

Do male hummingbirds feed their young?

Male hummingbirds do not participate in nesting and caring for young birds. Building a nest and taking care of the brood is a solo task meant only for female hummingbirds.

After mating, the male birds will usually leave their partners and have no role in raising their babies. To see male hummingbirds feed babies in a nest is a rarity.

How often do mother hummingbirds feed their babies?

Newborns are fed by their mothers as often as every 20-30 minutes (or 2-3 times in an hour). They need to be fed frequently because hummingbirds have a high metabolic rate and are prone to starve quickly if not fed as often as needed.

How many babies do hummingbirds have?

Hummingbirds usually lay 1-2 eggs in one brood. For some species, such as the ruby-throated hummingbird, the females almost always produce 2 babies.

Female hummingbirds usually produce one or two broods per year, depending on their location. Non-migrating hummingbird species can have babies any time of the year. Taking care of the young is primarily a female activity, males usually are non-participating in the care of the young.

The eggs are usually white and as big as a coffee bean. They are oval-shaped, and the length is less than ½ inch. They are very light and usually weigh, on average, about 0.4-1.4 grams.

Hummingbirds are altricial birds, meaning that they are born with no feathers. The baby hummingbird’s skin is dark-colored when they are born, and their beaks are still short.

A newborn hummingbird will look helpless, its eyes may be closed and unable to see for about a week or so. They are very dependent on their mothers for their survival.

Hummingbirds are living proof that no matter how small they are, they can do a lot of big things, such as extensively caring for their babies.

These elusive creatures are not easy to spot, but knowing how busy they are foraging and feeding their young, it is enough to admire them even from a distance.

When someone asks, “How do hummingbirds feed their young?” You will have a rapid answer after this article and for sure have a lot more interesting things to say about the extraordinary life of hummingbirds.