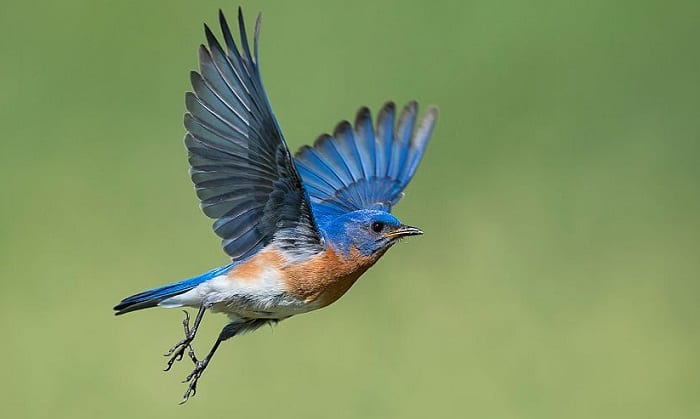 If you are a curious birdwatcher, you might ask, how long does it take for birds to fly? The answer to this question may vary from one species of bird to another. In general, it takes about 10 days to 3 weeks for birds to develop and learn how to fly. Larger birds like the bald eagle take as long as 72 days to learn how to fly while for a fledgling sparrow to fly, which is a smaller species, it takes only 14-16 days.

Stages in the Life Cycle of a Bird

All birds come from an egg. The eggs are incubated by parent birds until they hatch. To understand a bird’s cycle of development let us take a look briefly at the different stages of its life. 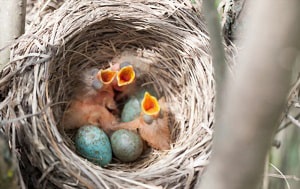 When a baby bird has just emerged from an egg, it is called a hatchling. Altricial birds such as songbirds are usually born with their eyes closed and without feathers. Larger birds such as hawks are born with a soft down of feathers.

Geese and chicken hatchlings are born with feathers and with their eyes open. After a bird hatches, the baby birds are very dependent on their parents for food and survival.

At this stage, the baby birds stay in the nest while they are developing physically and are being nurtured by their parents. A nestling is still unable to eat on its own.

Foraging for food and feeding is still the main responsibility of the mother or parent bird until the birds learn to fly. At this stage, they are still weak and the physical mechanisms needed for flying, swallowing and digesting their own food are still underdeveloped. 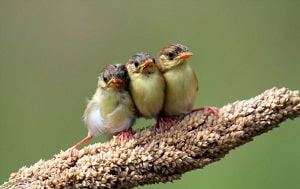 A fledgling is a young bird that is still learning how to fly. The wings and feathers of fledglings may already be fully developed at this stage but the birds are still discovering how to use these appendages for flight.

They can fly but they rarely go far from the nest and they will always return because their mothers will still continue to feed them for another 2 weeks or so.

Birds at this stage already leave the nest and may venture out on their own. Flying is already natural to them at this point in their life but they may still be sexually immature depending on the species.

5. The Sub-adult or Immature

A sub-adult bird may appear like a juvenile bird since its plumage is still different from that of the adult species. At this stage most species are still unable to participate in breeding because their sexual functions are not fully developed.

As birds reach this final stage of maturity, their feathers are already reflective of adult characteristics. This is the stage also of peak sexual development for birds which means they can already find a mate and start breeding.

Types of Birds and Their Fledgling Stage 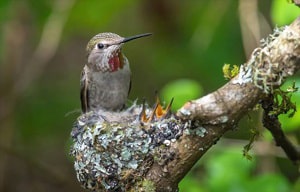 After 3-4 weeks since hatching, the baby hummingbirds are ready to fly and practice their flight skills. The fledgling stage lasts for about 2 weeks and it takes another 2 weeks before they can completely leave the nest.

The Baltimore Oriole female undertakes the solo task of building a nest which is pouch-shaped and hangs at the end of a branch.

The female usually lays three to seven bluish-white to grayish eggs. The incubation period lasts for 12 days to 2 weeks. The baby birds will stay in the nest and are fed by their mother for about 2 weeks before they start to fly. 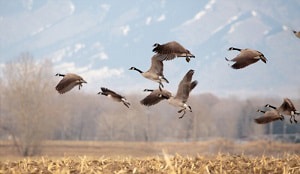 The Canadian goose is a wild goose that is native to the North American regions. It is a migratory bird and can be often observed to fly south in flocks during the winter season from September to October.

The average number of eggs a female can lay is five but its brood can be as few as two eggs and as many as nine eggs. Incubation period for goose eggs lasts for almost a month (24-32 days).

During the hatchling stage, the baby goslings can already walk, swim and even find their own food. They will reach the fledgling stage at around six to nine weeks after hatching. They will still migrate with their parents during spring before completely flying out on their own.

Cardinals are bright-colored songbirds that are usually found in many areas in the US all year round. The female cardinal usually produces 4 eggs per brood and incubation period lasts for 12 days.

The baby cardinals take only a short time to grow up into juvenile birds, they usually leave the nest and start flying after 10 days of nesting. This fledgling stage will take another 2 weeks until baby birds can fly on their own.

These are the examples of birds that have considerably long periods of flight training for a baby bird of their kind. It is interesting to note that those on the list are mostly species of large birds.

A majority of birds will fall under this classification in terms of fledgling period. Compared to those with long fledgling periods that are usually large birds of prey, these birds are of the medium to regular-sized birds.

Here are examples of birds that have shorter fledgling periods that may be as brief as less than 2 weeks. As you can see on the list are baby wrens learning to fly for as short as 8 days!

How does a baby bird learn to fly?

How long before a baby bird can fly is determined by the bird’s ability to learn and the guidance of the parent birds as well. The main motivator for baby birds to learn is the basic need of finding food.

The adult birds will teach their young to find food and will encourage them to fly short distances at first so they can look for food nearby.

The baby birds will also learn to fly by practicing and trying again when they fall. This will build their confidence to fly from one tree to the next or from the ground when they fall.

How do you know when baby birds are ready to leave the nest?

The time for leaving the nest may vary between different species of birds. In general, most birds will leave the nest when their wings and plumage are mature and they have mastered the ability to fly. Once the fledglings are able to look for food themselves, they are ready to leave the nest for good.

What time of day do baby birds leave the nest?

Baby birds during the fledgling stage leave the nest at the early hours of sunrise. They may leave the nest but only for a short period because they are at high risk for attack by certain predators if they venture out of the nest too long or go out later in the day.

What month do birds leave the nest?

There are varying answers to this question and this would depend on the type of birds and their breeding and nesting time. Most birds nest in the summer and it is not unusual to see baby birds flying for the first time during the months of June and starting to leave their nest.

In general, small song birds will leave their nest 3-4 weeks after nesting. Large birds such as eagles and owls may take as much as 90 days before they leave the nest.

For birds, learning how to fly is a process that does not happen overnight. It takes time before baby birds truly learn how to fly with enough confidence and agility to leave the nest on their own.

Just by reading this article you can now answer the question: “How long does it take for birds to fly?” These facts are really helpful to one’s understanding of birds and their development as they learn to fly.