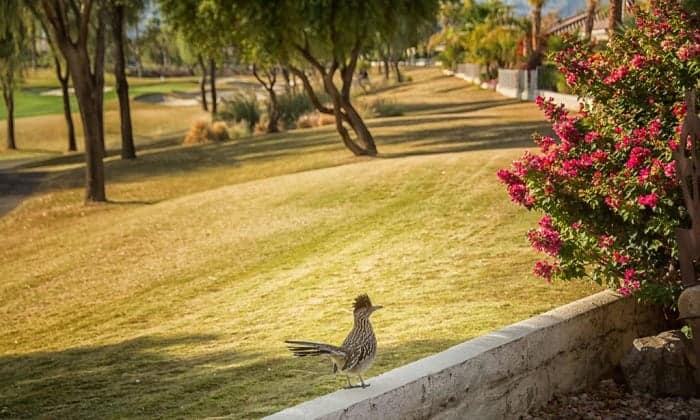 The Greater Roadrunner is also known as the chaparral cock, and is the state bird of New Mexico. It has a long tail and a thick blue-black cockscomb. These fast-running birds are usually 10 to 12 inches tall but can reach 20 to 24 inches when they are mature.

Roadrunners prefer running to flying as their bodies cannot stay balanced in the air even for a few seconds. But as they can travel up to 17mph across the desert southwest, they rarely have to fly. Interestingly, roadrunners’ special mottled feathers allow them to blend in with dusty bushes.

You don’t have to chase after this comical state bird. Indeed, you may attract and observe it in your backyard. Through this post, first, you will get to know where these wild birds usually reside and what they eat. Then you will learn how to set up the garden sanctuary with rock landscaping, sandy soil, desert plants that roadrunners are attracted to.

Let’s explore some facts about this bird and how to attract roadrunners to your yard.

Where are Roadrunners’ Homes 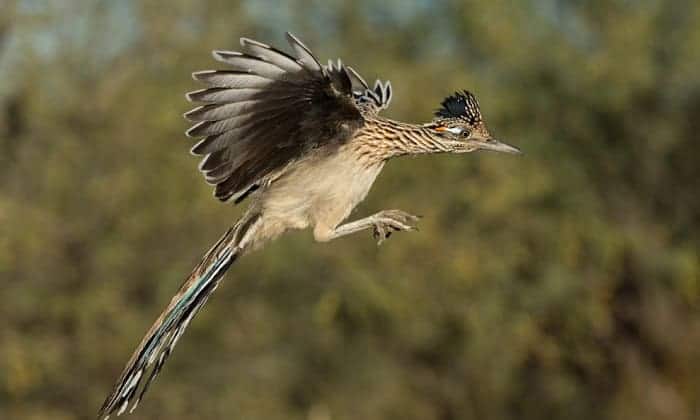 Roadrunners may be found in Mexico, as well as the south-central and southwest of the United States, including New Mexico, southern California, Texas, Oklahoman, and Arizona. They often gather in natural desert scrubland and by desert plants, such as chaparral scrubs.

As reported by Desert USA, roadrunners are attracted to great shelters and avoid wide-open places. They prefer open or flat ground with scattered dry bushes, chaparral, or dusty shrubs.

The roadrunners will relocate to areas with greater shelter if the scrub is trimmed and vast spaces are left open. This is since they can be well-camouflaged and protect themselves from enemies in the scrubs. Moreover, they can sprint faster in thickets or woods while other predators, such as coyotes and bobcats, have to slow down.

If thickets continue growing, they can attract a mating couple. These birds also build their nest on the terraces in the forests or thickets. Sometimes, these bushy blue-black crest birds are seen in the meadows or on the fences.

Avian Web says roadrunners are opportunistic, so they consume whatever is available. In other words, roadrunners are omnivores; their food sources come from both plants and other living creatures.

You can provide them with centipedes, insects, crickets, snails, lizards, etc. If you don’t have these on hand, you can feed roadrunners worms from the bird shop or place some rocks in the area to attract insects and centipedes. They consume eggs and snakes as well, especially rattlesnakes. However, you don’t have to put yourself into trouble if the roadrunners want to have a rattlesnake, as they will team up to kill the snake.

Many of the creatures on the roadrunner bird food list are humans’ aversion, but if you try getting rid of scorpions, snakes, spiders, or mice, you will drive roadrunners away.

Roadrunners’ food can also be fruits and plants. You can put in your backyard feeder some sumac, seeds, cactus, etc. Some people witness roadrunners sipping water, while others claim that roadrunners do not drink water because they get water from the food they consume.

This is true because in their native desert habitat, water is scarce, and the majority of water comes from the food they eat. Also, instead of using kidneys, roadrunners minimize water loss by producing salty tears.

Are you curious about what happens when a roadrunner encounters a snake? Check out this interesting video by National Geographic!

Tips on How to Attract Roadrunners to Your Yard 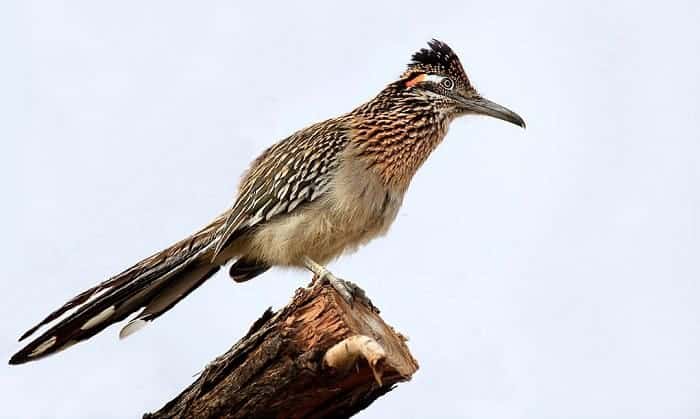 It is fascinating and pleasant to watch the birds come to your garden, especially not the common birds. Here are some tips to attract roadrunners.

Placing rocks in your garden or yard helps attract centipedes, scorpions, and lizards to wander and reside in the rocks. You can also build rock beds. These creatures are roadrunners’ feast. You will see roadrunners coming to your yard since they hunt for these creatures.

As roadrunners are often seen in the desert and are drawn to desert flora, planting some desert plants, such as prickly pear or cactus will make your garden more appealing to roadrunners.

Other reasons are that roadrunners often build their nests on cactus plants and they like eating fruits, and seeds of desert plants.

Apart from the desert and native plants, you should grow other short trees. Bushes of short trees are captivating to not only roadrunners, but also to insects, crickets, grasshoppers, and rodents. Growing more trees to provide food for the birds is a brilliant idea!

Most roadrunners prefer to live in a desert-like environment. Therefore, putting sandy soil into your yard will attract them. Don’t forget to grow some heat-tolerant plants or the desert species listed above.

Pets Should Be Kept Away from the Yard

Besides snakes, coyotes, and owls, pets like cats and dogs are among the roadrunner’s predators. Therefore, you should keep them away because they may chase after and scare roadrunners.

To draw a female roadrunner’s attention, a male bird makes a distinctive coo-coo sound in a succession of 3 – 8 downwards tones. The coo-coo may be heard approximately a quarter-mile distant at the early dawn.

You can learn how to make this sound by listening to it or listening to audio. In some cases, if the call is learned and mimicked by humans, it can attract a lone roadrunner. You can record the coo-coo call and replay it to entice the birds.

Fact: The male roadrunner also seeks to entice the female with food, tail wagging, and leaping. Both of them try to impress each other by offering gifts made of sticks and grass.

Although roadrunners are not known for attacking people, they may be very aggressive since they consume everything they find. The roadrunner is well-known for its capability of capturing and killing a rattlesnake.

Roadrunners may attack small animals and birds at the food station, so if other animals often come to your garden for food, you should put roadrunner food on the ground to stay away from other species. However, remember that preventing a carnivore-like roadrunner from preying upon their food is not possible.

One advantage of having a roadrunner is that it provides a natural service of protecting your house from insects, mice, or rodents. The roadrunners will feast on them before they can get into your house.

How to Befriend and Feed the Roadrunners

First, you will need to talk to get the bird’s attention. Then, leave the food on the ground in front of it, or you can try to hand feed it.

Can You Raise and Keep a Roadrunner As a Pet

Roadrunners are native to the United States, and it is illegal to possess, harass, or harm roadrunners or their eggs. Roadrunners are considered wild birds and protected under federal law (1918 MBTA). It is strictly enforced by a fine of $10,000 and 10 years of jail.

With their amusing appearance, roadrunners are entertaining to watch. Besides, whenever I watch Looney Tunes, I remember this slim, blue-purple bird. They will never go unnoticed in your yard.

You may entice them into your yard by using any of the methods outlined in this post on how to attract roadrunners to your yard. You will notice their herding and perhaps nesting in your garden.

If you have any suggestions for attracting these fascinating birds, please leave them in the comments below. We appreciate your assistance and suggestions.

Besides, discover other interesting topics for attracting birds: