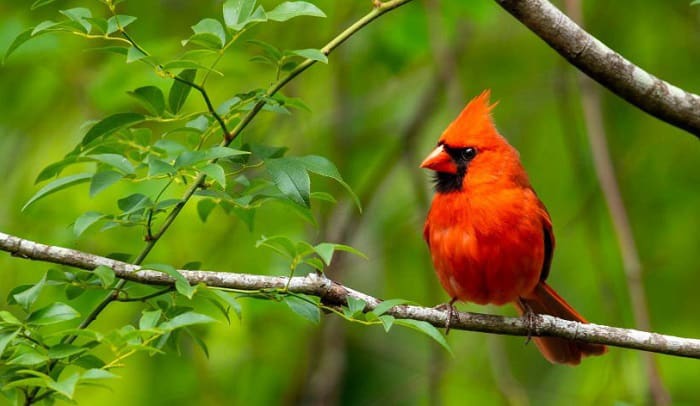 How many red birds in North Carolina do you know? On our list, we have 13! Common red-headed birds are tanagers and finches, but there are more you should know. The red bird blue head with long tail you saw yesterday might be the same as the one you saw a few minutes ago, or is it?

It can be confusing, especially when over two species of red birds are common in North Carolina. In addition, migrating red birds can be seen in the state. This list will help you differentiate them. Let’s get started!

There are around 470 bird species documented and recognized by the North Carolina Bird Records Committee (NCBRC). Out of this number, we picked 13 species based on their red color.

Most of them stay all year round in the state, while others migrate. Here are the different types of red birds and some of their basic information. It will make red bird identification easier for birders, birdwatchers, and anyone interested in birds.

Despite being rare, you can see these birds along the coast of North Carolina during the summer. They usually settle in semi-open habitats, such as gardens, roadsides, and woodland edges. Unfortunately, their breeding population is at risk as they are often captured and sold illegally as caged birds.

True to its name, the Painted Bunting is unrivaled; thus, it is sometimes referred to as ‘nonpareil.’ The males’ colors are a brilliant fusion of green wings and backs, blue heads, and red underneath. Females are bright yellow-green. They forage mainly on the ground and are more likely to visit if you have low and dense vegetation in your yard. 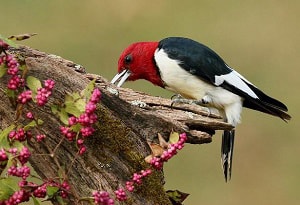 In the past half-century, the number of Red-headed Woodpeckers has decreased by over 70% in North Carolina. This is due to the destruction of beech forests that produce their favorite food, beechnuts.

Red-headed woodpeckers are often called the “flying checkerboard” due to their bold pattern. They have half-black and half-white wings, milky-white bodies, and fully crimson heads. Their red heads are sometimes difficult to see in an intense glare, but their harsh calls can give their location away. 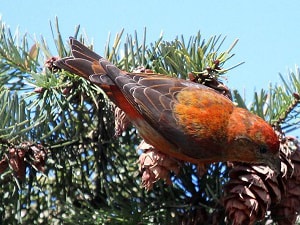 Red Crossbills are regular in North Carolina but can be seen more often in the western areas between June and October. These finches forage in coniferous woodlands.

But since conifers are unpredictable when producing seeds, they occasionally venture far beyond their usual range. In the mornings, you can see them along roadsides eating grits.

We can identify these birds by their unique crisscrossed bills. This odd shape was adapted to aid them in breaking tightly closed cones. Male Red Crossbills are generally red with white wing bars and darker brownish-red wings, and females are yellowish with dark unmarked wings. 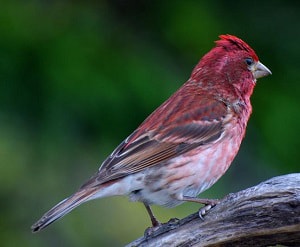 Purple Finches are not very common in North Carolina, but you can spot them during the winter between October and May. You can easily entice them to come to your bird feeders, but their population has decreased since the introduction of House Sparrows.

They are not purple, as their name suggests. Instead, they are more old-rose in color and described as a “sparrow dipped in raspberry juice.” It can be hard to identify these birds as they look similar to House Finches, and the key to telling them apart is the red coloring on the back of male Purple Finches. On the contrary, females have strong facial markings and notable streaks of brown and white. 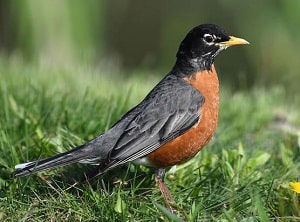 American Robins are widely known in North Carolina. They are comfortable with people and are commonly seen in gardens, pulling earthworms from the soil and nesting on windowsills and porches. You can hear them singing before the first light of dawn in spring and summer. Their songs are also used as an early warning of environmental issues.

These birds have a white throat to match the white dots around their eyes. The rusty red or warm orange breast thrush and dark head and back are shared by both males and females. But the females have paler colors than the males. 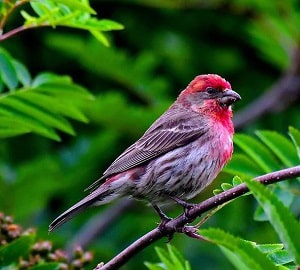 You can easily spot a House Finch in North Carolina any time of the year. They are originally from the western states but were recently introduced to Eastern North America and Hawaii. Their arrival received a warm reception and they are now usual visitors to many backyard feeders from coast to coast.

These adaptable and colorful red birds are commonly seen with humans in towns and cities, avoiding grasslands and unbroken forests. The male House Finch has rosy red upper breasts and around their heads. Females are brown with streaks on their belly, tail, and back, and both have cone-shaped beaks and notched tails. 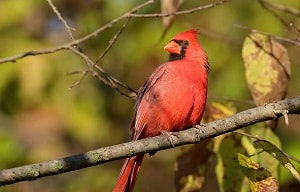 These birds are common year-round in North Carolina. Northern Cardinals are abundant and widespread. They inhabit various semi-open areas, from forest clearings to city parks.

You can also see them at bird feeders, making them one of the most recognizable red birds. This Cardinal is the representative avian of no less than seven states.

Male Northern Cardinals are red and they have a black throat and mask. The females are primarily pale orange-brown with red wings, tails, and crests. These birds are known to be obsessively defensive of their territories during the breeding season. They are so aggressive that they attack their reflections. 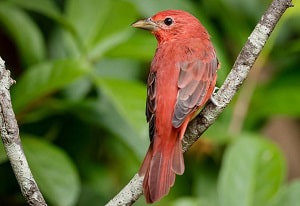 While these birds are regular North Carolina residents, they are more frequently seen during the summer between April and October. Summer Tanagers are forest songbirds and can be hard to spot on treetops. It also requires patience to catch sight of them since they move rather slowly.

Summer Tanager is considered the only entirely red bird in North America. They are bright-red, medium-sized, and have blunt bills. The males are bright red with a larger head and fuller body but shorter bill. The females have yellow bodies with greenish backs and wings, but come with a longer bill.

These magnificent and vivid red birds are seen during the summer in North Carolina. They are frustratingly difficult to find, so most people haven’t seen this bird before. That’s because they stay high in the forest canopy while singing their distinctly rich and burry songs. You can listen to their sounds to find their location or attract them to your yard with fruit bushes.

Scarlet Tanagers are burly birds with dull-tipped and yellowish gray bills. The red of the males contrasts with their black tails and wings. On the other hand, females and juvenile males have greenish-yellow bodies and paler tails and wings. 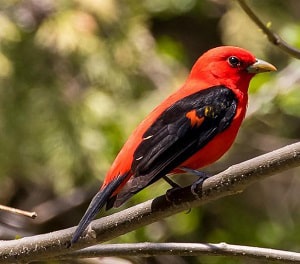 These birds are everywhere in Northern California. You can easily lure them to your bird feeders as long as you have suet, peanuts, and sunflower seeds. Their rolling calls are common in riverside woods and swaps. They are omnivorous and have adapted to life in city parks and suburbs.

Red-bellied woodpeckers should not be confused with Red-headed Woodpeckers just because they have shining red caps and less red in their bellies. The males have red feathers from their necks to their beaks, and females only have red coloring on the back of their necks. This differentiates them from each other. 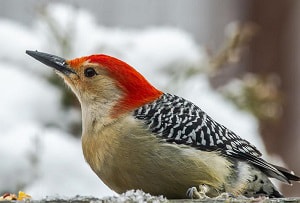 The lovely song of these birds is well-known in North Carolina. It sounds similar to the American Robins’ but is improved and better with sweet-sounding rises and falls. You might see Rose-breasted Grosbeak in leafy woodlands among the treetops.

These stocky birds are easily recognizable with their white, red, and black plumage, large, triangular bills, and white patterns on their dark wings. Male Rose-breasted Grosbeaks have a unique red mark on their white breast and black wings and backs. Females have heavy streaks, white eyebrows, and pale bills. 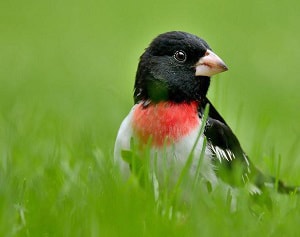 The North Carolina Bird Records Committee deemed the Pine Grosbeaks provisional. These are extremely rare red birds in the state but are permanent residents in other areas. They are more widespread in fir and spruce forests and high mountains. You can approach them closely as they are sometimes absurdly tame.

These big but slow boreal finches have stubby and thick bills that allow them to nip off tree buds and crush seeds effortlessly. Both genders have grayish bodies, with males decked out in pinkish red and yellow on females. 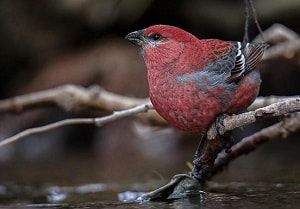 This is another extremely rare bird in the state, only spotted in Stony Hill and Chapel Hill. White-winged Crossbills are spruce-wood nomads. By the same token, it isn’t easy to monitor their total population. They energetically work around treetops, descending only to the ground to feed on cones that they can easily pry open.

White-winged Crossbills have heavily crossed beaks. The males have black wings and tails, two white wing bars, and are rose pink in other areas. Females have the same white wing bars but are more yellow and brown.

We hope the information in this article is helpful to you. If you know someone who would love to read this, share it with them! Have you spotted any red birds recently? Comment on them below; we love hearing from our readers!

How to Take Care of a Bird Egg? – Things You Should Do

Those who watched the 1996 film Fly Away Home may harbor fantasies of hatching their ...

Why is My Parakeet Shaking? – 7 Main Reasons

Parakeets are also known as budgerigars or “budgies” for short. They are lively, colorful birds ...

What is the State Bird of Oklahoma? – Scissor-tailed Flycatcher

Several states in the United States have a specific bird to represent their territory. These ...

What is the State Bird of Iowa? – The American Goldfinch

The first state to select the American Goldfinch as state bird was Iowa in the ...

What are Four Calling Birds? – The Truth Behind Them

The delightful tune of “Twelve Days of Christmas,” which was first published in 1780, will ...

Mealworms are not real worms. If they’re not worms, what are they for real then? ...