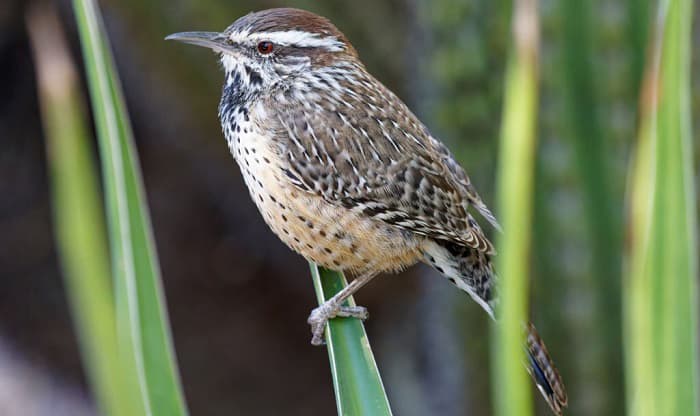 What is the state bird of Arizona? It was in 1931 when the cactus wren was proclaimed as the legislative avian of the The Grand Canyon State. This bird species prefers dry weather, and so they seamlessly survive in the desert lands of Arizona.

Cactus wrens have a distinctively melodic song, and they’re absolutely fascinating. Learn more about this species below.

What You Need to Know About the Cactus Wren 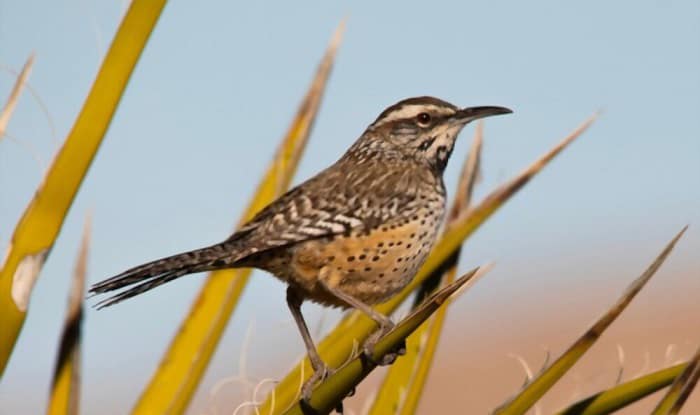 The state of Arizona known for their sun-baked lands, is home to the cactus wrens. These birds became the state avian thanks to the strong endorsement of the General Federation of Women’s Clubs.

The cactus wren is a resilient fowl species that has the ability to adapt. Wrens are great defenders of their territories, especially with their terrifying yells. But more importantly, these birds are great parents.

For bird identification Arizona state passerine is the biggest species in the family of Troglodytidae. They have a combination of brown and black coloring, coupled with white specks.

Even if the cactus wrens are the biggest among their relatives, they are still relatively small fowls.

The Arizona state bird is insectivorous, which means they love to feed mainly on insects. Spiders, grasshoppers, wasps, and butterflies are their favorites.

Cactus wrens are survivors. If the typical food sources are not widely available, they don’t just give up. These resourceful fowls turn to vehicles and search for dead insects caught in these machines. And so they thrive, and their population is not at risk.

Additionally, cactus wrens don’t rely on water to stay alive. They get their liquid requirement from their meals. And though they mostly eat insects, they also feed on seeds and fruits, so bird enthusiasts can still attract these avians to their feeders.

As for predators, the cactus wrens are meals for foxes, coachwhip snakes, coyotes, cats, hawks, greater roadrunners, and bald eagles. But thanks to the scary calls of this fowl species, these birds can successfully ward off predators.

They can do this efficiently because both males and females work as a team to defend their homes.

The breeding season of the cactus wrens is between February and March. But even outside this yearly event, this species builds multiple nests and ferociously looks after them.

Even when not ready for mating, the juveniles, at barely two weeks old, begin to collect nesting materials. They then start the construction in two months.

When it’s time to mate, AZ state birds mate with one partner for life. Both pairs choose a thorny cactus or other vegetation to create their nests at 3-10’ off the earth.

The nest location is a strategic plan to make it harder for predators to disturb their football-sized homes.

Once the eggs are hatched, their devoted parents hunt for insects to feed their baby birds. But prior to feeding, the wings and legs of the grasshoppers or other insects are taken out so the chicks will not have trouble swallowing them.

The young cactus wrens are cared for by the adults until they are old enough to fly out of their nests.

Facts About The Cactus Wren 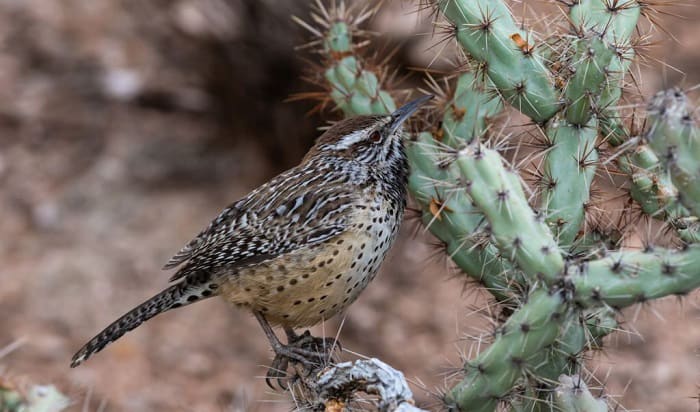 Arizona offers the kind of habitat that cactus wrens require to live. These stout birds find shelter in cacti, where they roost and nest.

They thrive in the desert, search for food nearby, and do not migrate. These avians are gorgeous in their simple plumage, but they’re threatening when they need to.

Let’s discover a couple of facts about the incredible cactus wrens.

There are five undisputed subspecies of the cactus wren:

During courtship, the cactus wrens perform a unique greeting ceremony. Keep in mind that these creatures are regarded as bully birds, and their mating ritual appears harsh yet sweet.

They display the full length of their feathered wings and tails, and emit a savage sound. The pairs then kiss each other and mate for life.

The ground-dwelling cactus wrens are not flightless, but they’re not good at flying. They prefer deserts, but they can adapt to human civilization for survival.

The natural habitat of these fowls are at risk from human activities, fire, and predators. But despite the challenges, this bird species continues to thrive.

These intimidating birds use their wings, tails, and “scri” call to defend their homes. They are indeed more than capable of protecting their families.

A male cactus wren is menacing, but with a mate, the aggressiveness intensifies for the betterment of their family. All kinds of trespassers pay the price of their intrusion, even eggs laid by other fowl breeds.

This bird species is known for their sounds that scare away predators and other avians. The calls of the cactus wrens include:

The population of the cactus wrens has reached 7 million. These birds are not threatened with extinction, and they have a lifespan of 1-7 years in the wild. They are usually found in the US deserts and central Mexico. This bird breed is protected by law against game and harm.

Despite the strategic location of the nests, a few predators can still find their way to the baby birds. Fortunately, the chicks have the right instinct to camouflage themselves from predators. They press their bodies to the wall of their small homes and disguise themselves as part of the nest.

The name cactus wren speaks for itself. This bird species is found in deserts, and they live in cacti. So it’s no surprise that their name is associated with their natural habitat.

Cactus wrens are insect eaters, but their diet has a consequence. Insects have Avifilaris, which is categorized as a microfilaria worm. Once the birds bite into their targets, they get infected by this parasite.

The answer to the question what is the state bird of Arizona is the cactus wren. These menacing-sounding avians thrive in deserts and cacti, and they’re non-migrants. The brown and black birds love insects, and are known to search vehicles for food when the ground has none.

Help us spread the word about the cactus wrens. And feel free to let us know what you think. We always welcome new ideas and comments.

Before you go, make sure check out these related posts to other state birds: