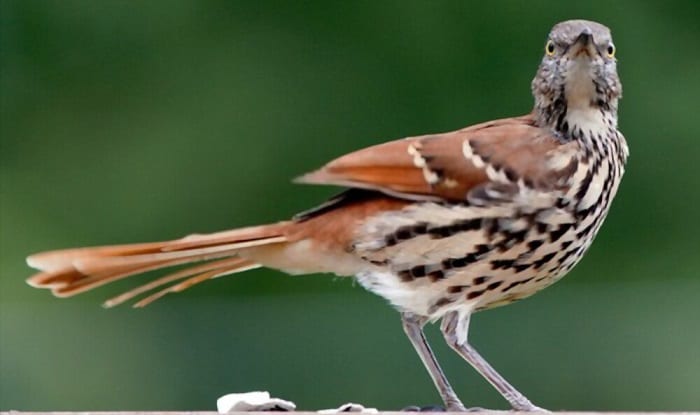 The brown thrasher is the answer to what is the state bird of Georgia. This bird species was legislated as the state avian on March 20, 1970 together with the quail as the official game bird. The Empire State of the South chose this bird as they felt for its unique song.

This bird species got its name from the behavior of thrashing the spot where the avians forage for food. They have many good qualities too, plus some fascinating facts.

The Journey of the Brown Thrasher Georgia

Georgia state bird and flower are the brown thrashers and Cherokee rose or rosa laevigata, respectively.

The former was chosen thanks to its exceptional vocal skills that can generate over a thousand calls. They can imitate other avian calls as well as humans.

Before state symbols are approved, they usually go through a long journey, and the brown thrasher as the state bird is not an exception.

In 1928, kids chose this bird species as their favorite avian. And the children’s voices were made louder by the Atlanta Bird Club and the State Federation of Women’s Clubs.

Seven years later, the brown thrasher became the state bird by the proclamation of Governor Eugene Talmadge. But the title was not official. On March 20, 1970, this brown bird was finally declared as the official state bird by the Georgia General Assembly.

In 1970, the Brown Thrashers was declared the state bird, and the quail became the official game bird of Georgia.

What to Know About The Brown Thrasher 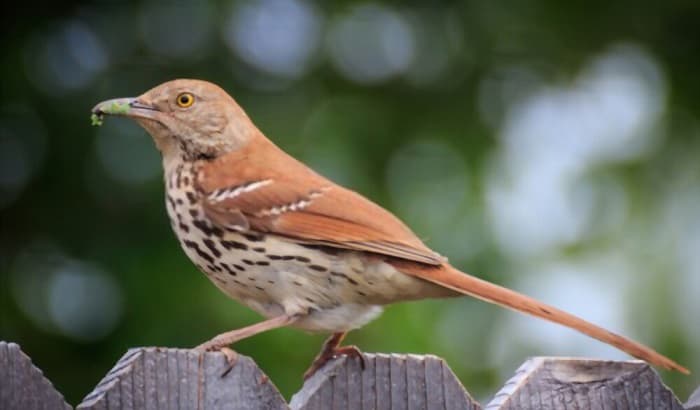 If you see brown birds in Georgia, chances are you’re seeing brown thrashers. This avian species has an oxidized reddish-brown plumage with vibrant yellow eyes. They have light-colored stomachs, dark markings, a white breast with a teardrop impression, and a gray face.

Additionally, brown thrashers have lengthy, rounded, and slightly downward brownish bills. They’re distinctive with their upward-facing tail feathers. And both sexes look alike, though females are smaller than males.

These juvenile birds do look similar to the adults. But, the younger brown thrashers have clearer specks on their upper bodies. Plus, their eyes are an olive hue instead of bright yellow. 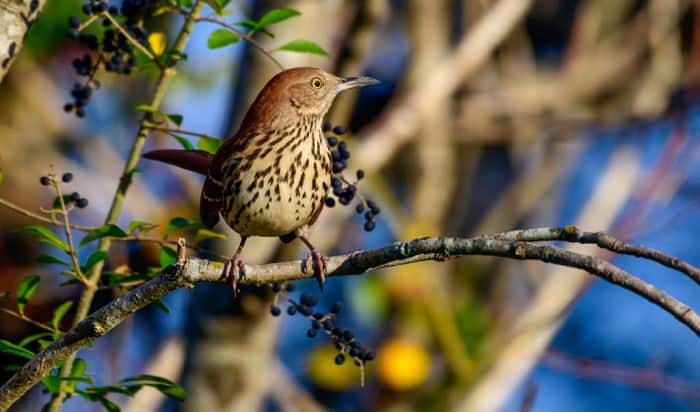 During the breeding season, pairs of Georgia’s state bird seeks the perfect spot as mates. Both males and females build their cup-shaped nests out of grass stems, twigs, rootlets, dead leaves, and thin barks. Also, the nest is usually 3.5” and a few inches in depth, located in dense shrubs.

This bird species stays monogamous for the whole year of brooding. However, they can have new mates for the next year and start a new family. During the courtship process, the male and female offer one another dead twigs or leaves.

The males fly after the females to complete the courtship before mating. They’re aggressive creatures towards their predators and even to the same bird species. And when it’s time to incubate the eggs, both parents take turns performing this crucial act.

When hatched, the baby birds have their eyes shut. They have pinkish skin and scarce gray-white feathers. The hatchlings are completely dependent on their parents for protection and food.

Once the baby birds reach their juvenile stage, they leave the nest. The good thing about this bird species is that the nesting period is short. Young brown thrashers abandon their first home in just a couple of days. The family leaves their nesting spot early to escape predators.

Indeed, baby birds leave the nests typically in nine days. They can survive well on their own thanks to fully grown feathers. And of course, they have the guidance of their parents. 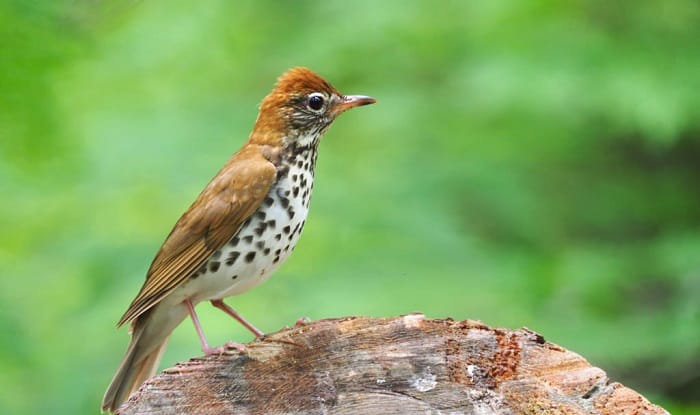 The Georgia national bird, brown thrashers, are primarily insectivorous, but they eat plants and fruits as well. This bird species feeds on insects, arthropods, nuts, seeds, and fruits. They forage the ground in groups, and they usually like to munch on:

Aside from insects, they also eat fruits such as blueberries, pokeberries, hollies, Virginia creepers, raspberries, bayberries, and cherries.

Facts About The Brown Thrasher 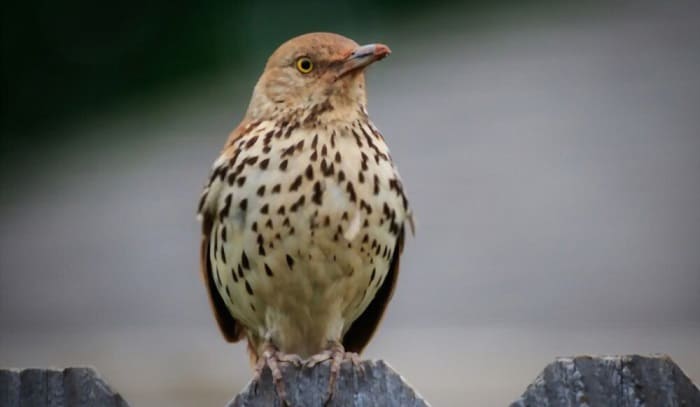 The brown thrasher is also referred to as fox-colored thrush or brown thrush. It is a medium-sized avian that is very much interesting.

Brown thrashers are gifted with sturdy bills. And to defend themselves or their families, they use their bills. This part of their body is lethal to their enemies. And aside from their bills, this bird species also utilize their vocal expressions as a defense against threats. Flapping their wings is another method of protection for brown thrashers.

There are approximately 6.2 million brown thrashers in the world. Their lifespan is 12-14 years, but so far, the oldest bird from this species is only 10 years and 11 months old. This particular bird was tagged in 1967 and died in Florida in 1978.

The brown thrasher, Georgia state bird, primarily got its name from their thrashing actions. When they search for food on the ground, they tend to perform a sweeping motion with their bills. As they move their bills from side to side, leaves and dirt fly in the air.

The Georgia state bird is not sociable. This bird species is naturally shy, and they prefer thick shrubberies and woodlands. However, their behavior changes during the breeding season. By this time, they become aggressive in defending their nesting territory.

The number of brown thrashers is still quite large, but their population is decreasing. This is mostly because of the gradual loss of their natural habitat. Insecticides and pesticides also play a huge part in declining the number of these bird species.

The Peach state proclaimed the brown thrasher as the legislative avian. And that answers your question as to what is the state bird of Georgia. This bird species was chosen for its singing repertoire, which amounts to more than 1000 songs and calls.

They are shy, but brown thrashers tend to be aggressive when their family is on the line. These birds are known for their thrashing motions, thus the name.

We hope you gained new information from this informative post. Kindly share with your friends. And leave us a message. We always welcome suggestions from our readers.