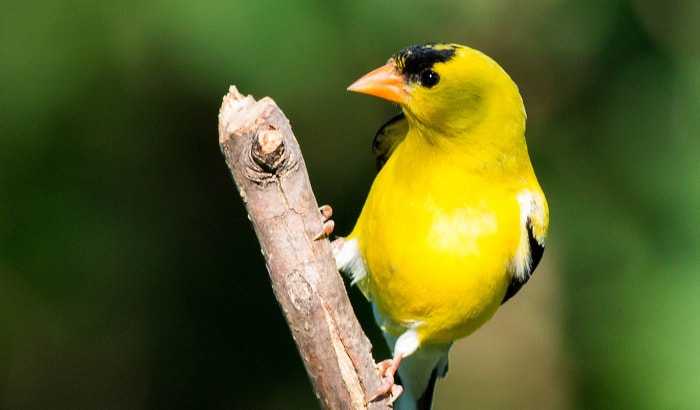 The first state to select the American Goldfinch as state bird was Iowa in the year 1933. New Jersey and Washington, later on, adopted the same bird as their official state symbol in 1935 and 1951 respectively.

This brightly-colored bird is found in Iowa year-round and has been a cherished bird because of its loyalty to the State of Iowa. Now that you know what is the state bird of Iowa, it’s time to learn more interesting facts about the American Goldfinch.

Quick Facts about the American Goldfinch 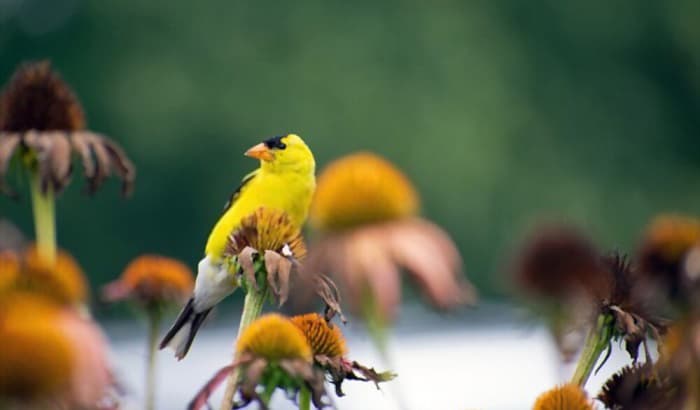 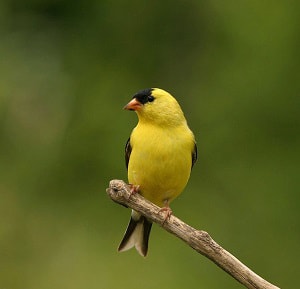 The American goldfinch (Carduelis tristis) is a small bird in the finch family. It is the only species under the genus Carduelis to molt twice a year – in spring and autumn.

To prepare for the winter, the bird sheds all its bright feathers for duller ones. In spring, the goldfinch changes into a vibrant yellow for males and a yellowish brown for females, with its tail and wings staying the same.

The Iowa state bird name comes from the color of its dazzling yellow plumage that shines like gold. This color is more prominent on the male eastern goldfinch during the mating season.

The striking color in male goldfinches is meant to catch the attention of potential partners. In contrast, the female goldfinch’s feathers are more muted and in a dull shade of olive to brown on the body, tail, and wings.

Carl Linnaeus, the pioneer of natural taxonomy, first classified the American goldfinch into the genus Fringilla, where it was grouped with the common chaffinches and the bramblings.

Another naturalist, Mathurin Jacques Brisson established the genus Carduelis into the naming system for birds where the American Goldfinch and the European goldfinch were reclassified in 1760.

It was then regrouped to the genus Spinus which was added in the nomenclature in 1816 along with the species of siskins and other types of goldfinches such as the lesser goldfinch and Lawrence’s goldfinch. 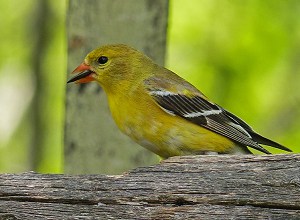 American Goldfinches are found predominantly in North America, such as California, where weeds are abundant. You can spot them in the peripheral forests, open woodlands, meadows, residential areas, and backyards. They are rarely seen in the deep forests.

They are found all year in Iowa, no matter what the season. These birds may reach as far south as the woodlands of Florida during the winter season from December to February.

Goldfinches are granivores, which means their diet is composed mostly of seeds. They have a penchant for sunflower seeds, elm seeds, and Niger seeds. They are mostly vegetarians – a unique trait among birds. Once in a blue moon, goldfinches, especially younger ones, might eat insects.

They usually feed during the day, and they also like to consume native milkweed. They like to hang around thistle plants for the seeds and use this plant’s fuzz to build their nest.

The American goldfinch is a social animal. They can be found in flocks during the non-breeding season. When it’s time for mating season, they spread out into smaller groups.

Both sexes are very territorial when they are building a nest. Males protect their territories against other male finches by attacking those who come near the nest. 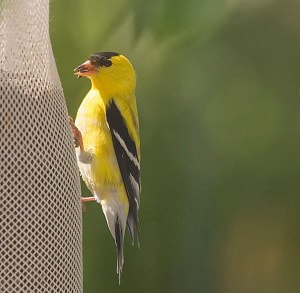 The American goldfinch is known for its “po-ta-to-chip” bird call, but they have other varieties of vocalization. One notable example is a courtship call, which sounds like “tee-yee,” the male usually makes during the mating season.

Compared to other North American birds, the goldfinch tends to breed later in the year. Usually, their breeding season starts in June or July. The reason for this is the availability of seeds during the summer month.

Plants such as sunflowers, milkweed, coneflowers, and thistle are abundant in the late summer. The availability of the seeds from the flower during this season provides a favorable condition for the goldfinch to build its nest and have enough food supply for its babies. 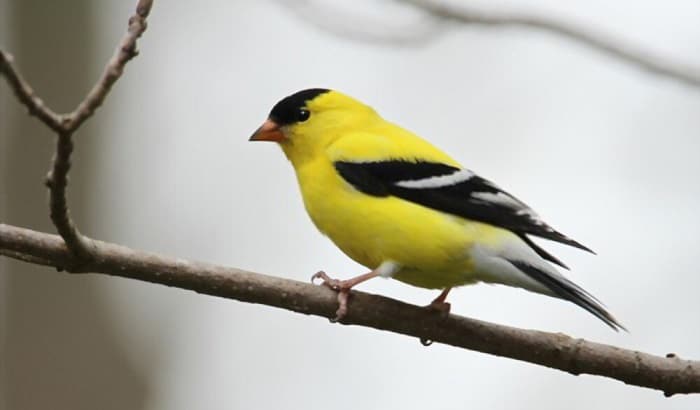 Why is the American goldfinch the state bird for Iowa?

The American goldfinch was chosen by the Iowa Ornithologist Union (IOU) during an election in 1932. There are a lot of yellow birds in Iowa similar to the goldfinch in color, such as the Western MeadowLark, which was also a contender in the election.

This species stood out because the American Goldfinch stayed in Iowa even during the winter. It was considered a loyal bird to the state of Iowa and, by virtue of this, was voted as the official state bird by the IOU.

When did the American goldfinch become the state bird for Iowa?

The American Goldfinch was voted as the state bird in 1932. This declaration was only made official by law during the Iowa legislature meeting the year after, on March 22, 1932.

Fun fact, the American Goldfinch is also the official Washington state bird as well as the official bird state symbol of New Jersey.

The American goldfinch exhibits sexual dichromatism, meaning that there’s a color variation between the two sexes.

Identification of the breeding male goldfinch is easy; aside from the vivid yellow plumage, it sports a prominent black cap and notched tail with white feathers. The color of their wings is black with prominent white markings.

In contrast, the female’s feathers are predominantly in the dull shade of yellow to olive. The color of the tail and wings is dark brown.

The male’s feathers take on the same color as the female goldfinch during the winter and autumn months. The only way to distinguish them is that the male has yellow shoulder patches.

Goldfinches have a strong pink-colored conical beak. The color changes during summer during the molting season and may appear bright orange.

Why is Iowa state mascot a bird?

What are the other Iowa state symbols?

The state tree of Iowa is the oak, which became official in 1961. The Geode was designated as the state rock because many of these geological rocks are found in Iowa.

Pictures of the state seal and flag of the state will also show images of an eagle holding the state’s motto. They do not have an official state animal but having a state bird, the American goldfinch, has sufficed for this.

After reading this article you already know what is the state bird of Iowa and a whole lot more interesting goldfinch facts. The American goldfinch is one of the coolest and most eye-catching birds found in Iowa. It is no surprise that it is a unique bird for the people of Iowa.

What do you think of this small bird? Do you think they deserve to be the state bird of Iowa, or is there a better contender for the position? Tell us in the comment below.

Besides, you also can refer more to other posts related to US state birds such as facts of state birds of Alabama, Utah, or Maryland.