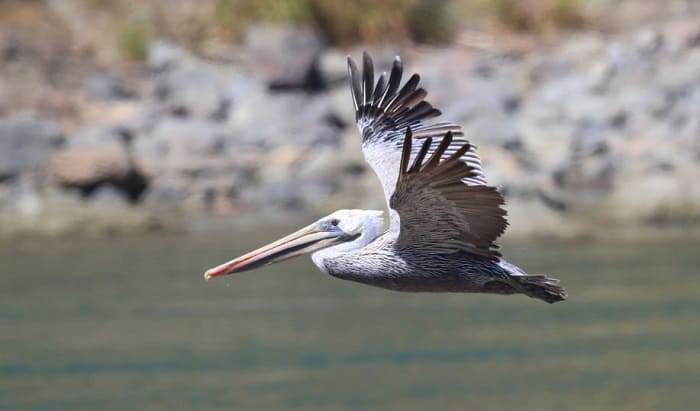 State symbols are adopted by places to represent the ethos of their region, and most states adopt a bird that represents their core values.

So, what is the state bird of Louisiana? We do not need to look further, the answer lies on this state’s seal and flag, where the Louisiana brown pelican is at the center of both state symbols. The connection between Louisiana and the brown pelican goes way back since the bird has been on the official seal since 1902 and on the flag since 1912.

Why is it the chosen one? Here are some of the outstanding features of Louisiana’s state bird.

What Do Pelicans Have to Do With Louisiana? 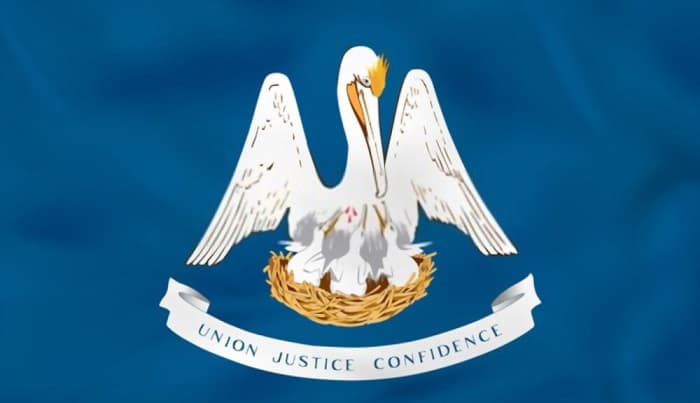 The long coastline of Louisiana has been home to the brown pelicans for a long time, and has become a beloved bird to the residents.

The state of Louisiana has adopted the Pelican as the official state bird since 1966. One has simply to look at their flag to remember the state bird of Louisiana.

The fact that they are proudly called the “Pelican State” says a lot about the affinity of the people to this extraordinary seabird. If you visit the state, you will probably see drawings and images of brown pelicans everywhere.

The seal of the state of Louisiana pictures a pelican feeding its brood. One of the reasons why the pelican was chosen by Louisiana as the state bird is to give homage to the inherent nurturing and kind behavior of this bird. 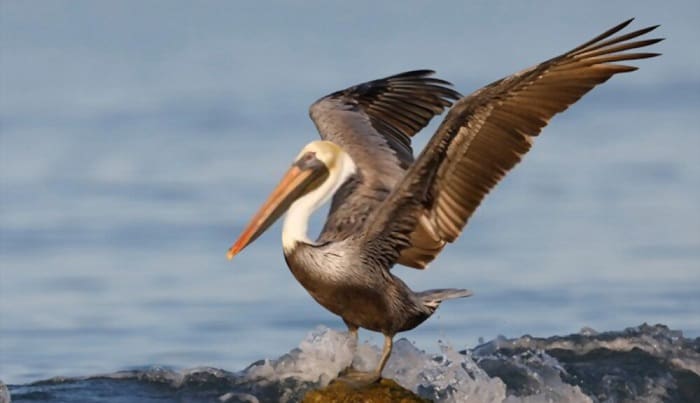 There are 8 existing species of pelicans, they belong to the genus Pelecanus. In general, all pelicans have a long beak and a throat pouch.

The brown pelican (Pelecanus occidentalis) is the smallest among the extant species. It feeds almost exclusively on fish and is generally non-migratory.

The brown pelican is the smallest of its species and is lighter in weight compared to the white pelican. The plumage on the head of the Louisiana pelican is white, but the color of the nape and neck of this species is brown.

They have an elongated bill, measuring approximately 11 inches to 13.7 inches which is the average length for most pelican species.

The Louisiana pelican is a true aquatic bird and is capable of diving in the water beak first to catch fish. It would fly as high as 9 meters in the air before diving below the surface when foraging.

The huge pouch would act as a net to catch fish, tipping it slightly to drain water before swallowing the prey.

To feed its young, the pelican would predigest the food and then regurgitate it directly in their mouths. They stay with their young for as long as 8-10 months.

Louisiana’s state bird, the brown pelican is a true aquatic bird together with its sister species the Peruvian pelican. It is one of three species of pelicans that are found in the United States.

They usually live in marine estuaries and beaches. They are rarely found on open seas. Brown pelicans are usually found in the Atlantic coast and the Pacific coast line.

This species has shown its resiliency throughout the years despite being threatened with extinction. The Louisiana brown pelican was tagged as an endangered species from the year 1970-2009 because of the widespread use of DDT.

This affected the pelicans’ ability to reproduce. Their eggs were malformed and breeding was difficult. They were barely spotted in the areas of the Gulf Coast and considered extinct in Louisiana in the year 1963 causing concern among the conservationists.

Their numbers recovered in 1995, decades after the US banned the use of DDT.

What other states or countries have the brown pelican as national or state symbol?

The brown pelican is the national bird of countries such as Barbados and St. Kitts and Nevis. It is also the official bird of the Turks and Caicos Islands.

What is the difference between a brown pelican and white pelican?

The Louisiana pelican is smaller than the white pelican and is distinguished from the Great American white pelican by its unique way of getting fish by propelling itself up in the air and then diving in the water to catch fish.

What are the popular state symbols of Louisiana?

The Louisiana state bird and flower (Magnolia) are popular symbols of Louisiana. They also have the honeybee as the state insect and the Catahoula Leopard dog as the official dog of the state.

At present, Louisiana is home to around 40,000 brown pelicans. Because of its character and unique capabilities this seabird proudly embodies the values and principles of the state of Louisiana.

It is part of their history and continues to be a much-loved resident. Now that you know what is the state bird of Louisiana, you might want to see a real brown pelican when you visit the pelican state.

Explore birds that are other state symbols below: