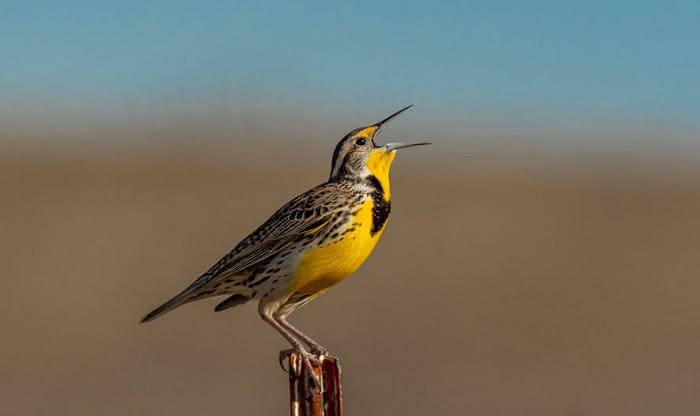 What is the state bird of North Dakota? It’s the Western Meadowlark! This bird is part of the blackbird and oriole family. It is often confused with the Eastern Meadowlark, which shares the same plumage pattern and hue.

Get to know more about the Western Meadowlark and how it became the representative avian of North Dakota. Keep on reading! 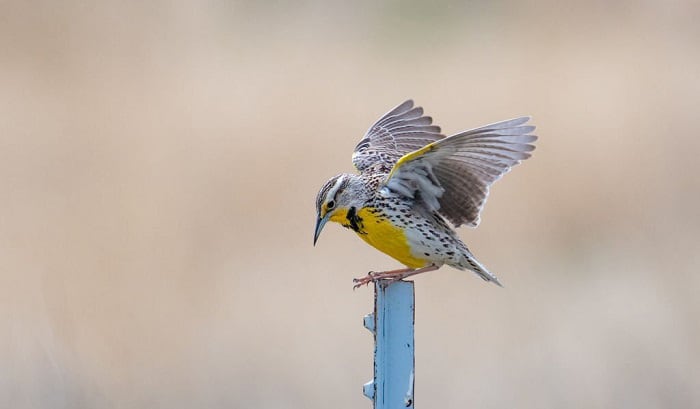 The Western Meadowlark has a scientific name, Sturnella neglecta, which was from a Latin phrase that translates to overlooked or neglected. These grassland birds are widely recognized through their unique songs and calls.

These birds measure between 6 inches to 10, head to tail, and weigh from 3 to 4 ounces. Their wingspan can spread up to 16 inches. The long and sharp pointed bill and brown head stripes are also the notable features of a Western Meadowlark.

Adults have a black V band on their throats and yellow cheeks and underpants. From behind, you can see the gray and black spots on their brown plumage and the white feathers on their tails.

They conceal their nests on the ground by creating an intricate tunnel of nesting materials covered with grass. People, especially hikers, are advised to be mindful of where they step.

These birds are active during the day and quiet at night when predators are roaming around. Male Meadowlarks are in a serial monogamy where they form a nuclear family after each breeding season.

This is the reason they always hunt for food to provide for their younglings from both families.

Their diet varies and rotates depending on the availability of food sources and the season. In the summer, they have a carnivore diet consisting of crickets, beetles, grasshoppers, and the like. During early spring, winter, and fall, they will feed on grain and seeds.

Their meadowlark media stock symbol are on the Internet. Many companies use it because of the symbolism behind this bird species.

Aside from the Western Meadowlark, a handful of other yellow birds exist in the state. You can distinguish them by the parts of their bodies and plumage where the yellow patches are. Look at this list with pictures. 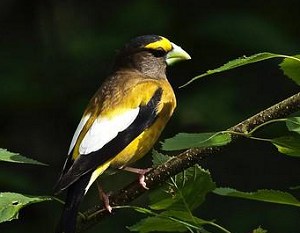 This Grosbeak species has larger and strong funnel-shaped beaks and is approximately the same size as American Robins. The yellow plumage is more prominent on males, while females only have a tinge of yellow on their sides and neck.

If you want to attract these birds to your feeder, they are fond of sunflowers and prefer a large platform feeder where they can dine comfortably. 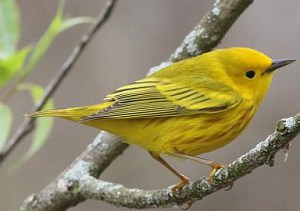 This bird has yellow plumage covering its whole body. There are some light brown stripes on its chest and the males’ color is brighter than the females.

You can easily spot an American Yellow Warbler in the state because they are almost everywhere. They inhabit damp forests like willow groves. 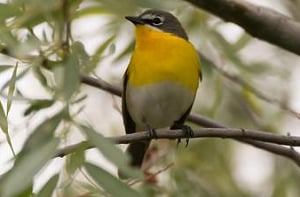 Their big head, long tail, and large build is one feature that sets them apart from many warbler species. They have yellow coloring on their chest, hence the name, and lower body.

These birds are most active during the spring and stay quiet during the other seasons. You can find them in bushes and thickets with dense greenery. 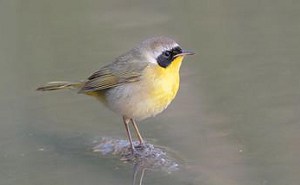 This bird species has the same coloring for both sexes. The black mask on the eyes is the notable feature to distinguish the males, which also gave them the nickname Yellow Bandit.

When fall comes, Common Yellowthroats rest during the day and migrate at night. This is also the best time to spot a flock of these yellow birds at night during a full moon. 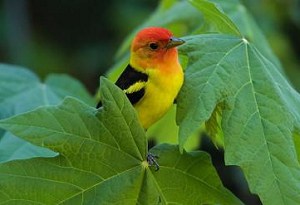 The orange patch on the head is a unique characteristic that is only seen in male Western Tanagers. The females have gray wings and a yellow-green chest area. The unique color combination has a likeness to a burning fire.

You won’t spot these birds as often as others since they mostly stay and nest in coniferous forests of high mountains. But you have a high chance of seeing them during migration in the late spring. 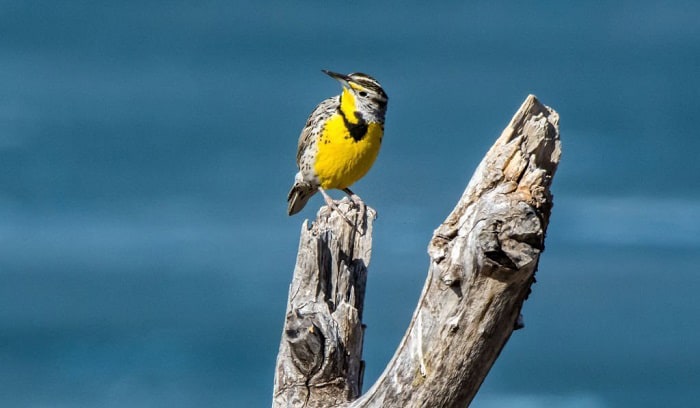 Where is North Dakota’s state bird?

Western Meadowlark is widespread across North Dakota. There is also a large population of these bird species in Tennessee and Hawaii.

Why is the western meadowlark the state bird of North Dakota?

The North Dakota state bird was officially adopted in 1947. The Western Meadowlark was chosen because it is a loyal habitant of the state’s grassland and never migrates.

There are five other states that share the same state bird in North Dakota: Kansas, Wyoming, Nebraska, Oregon, and Montana.

North Dakota is the 19th largest state in the United States, with an overall area of 70,704 square miles. Looking at the map, the state is a rectangle.

It has an elevation from the flat area of the Red River Valley in the east and rises to the west where the Rocky Mountain is. It comprises three major geographic regions:

What are other North Dakota state symbols?

After reading this article, we hope you got the answer to the question, what is the state bird of North Dakota and learned more about the bird species. There is still a lot to know about this ND state bird. Let us know what we missed or share your encounter with the Western Meadowlark.

We hope you enjoyed reading this as much as we loved putting everything into this. Share this article with anyone who is interested in learning about state birds.