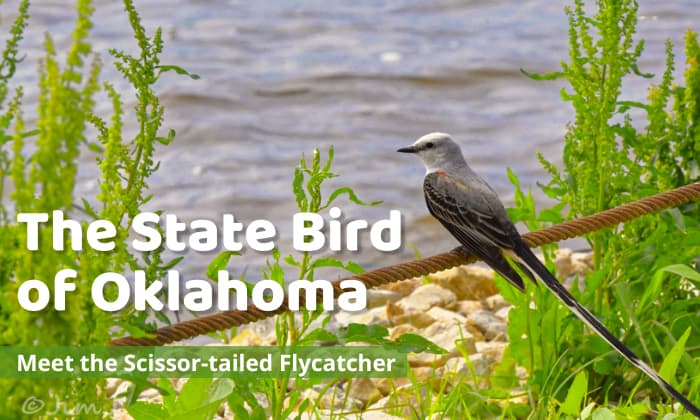 Several states in the United States have a specific bird to represent their territory. These states chose their feathered representatives for various reasons, from their place of habitation to their unique features.

What is the state bird of Oklahoma? The Scissor-tailed Flycatcher is the Oklahoma state bird. Since Oklahoma has a diverse landscape, the state became the central nesting range for this flycatcher. It also eats insects, mainly flies, as its name suggests. 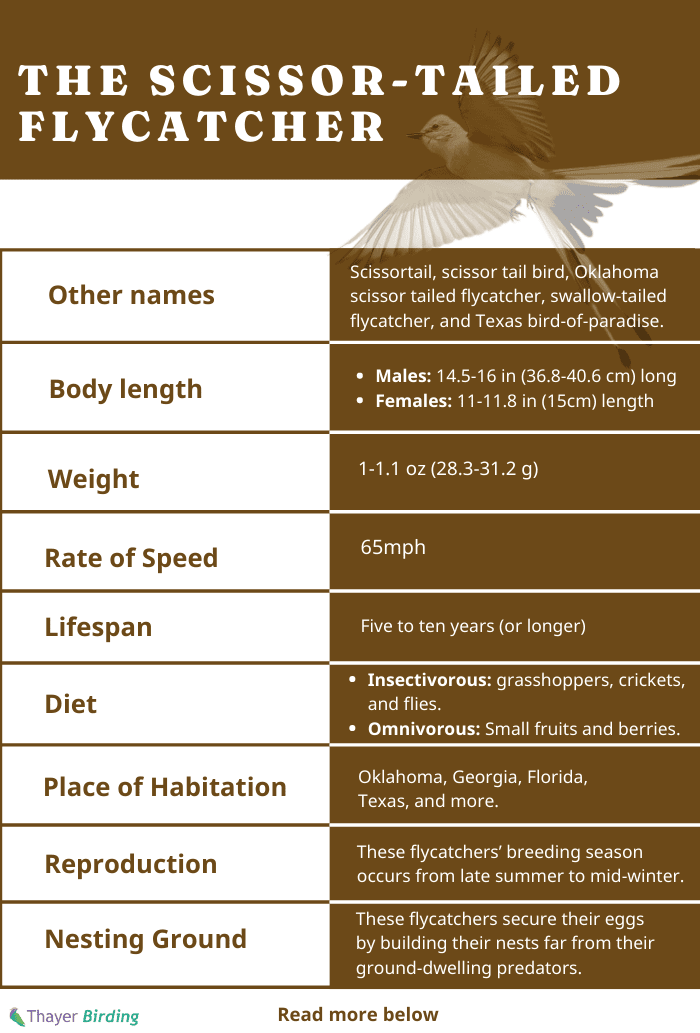 All About Oklahoma’s Official State Bird 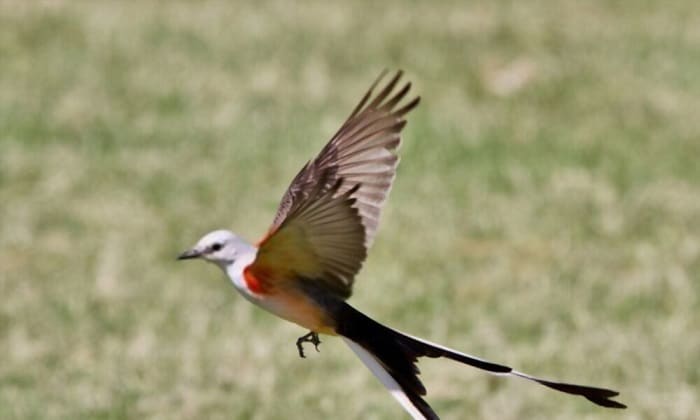 Most states have representative symbols, from their state bird and flower to colors and motto. Did you know the Oklahoma state motto, “Labor omnia vincit” means “Work conquers all”? That’s a random fact you’d love to know!

Meanwhile, the scissor-tailed flycatcher—the quiet yet strikingly ethereal bird—became the Oklahoma state bird in May 1951.

No other bird in Oklahoma matches its distinctive beauty, showcased when performing its famous “sky dance.” Moreover, this bird plays an essential economic role in the state as they prey on ground-dwelling insects that live on farms and ranches.

Hop on to know more about this feathered beauty.

Meanwhile, its Latin name is Muscivora forficata, which came from the Latin words for “fly” (musca), “to devour” (vorare), and “scissors” (forfex).

The scissor tail bird falls under the genus Tyrannus, which describes the “tyrant-like flycatchers” that are highly aggressive towards other birds that enter their breeding areas.

As the pictures suggest, the Oklahoma scissor tailed flycatcher is typically small. However, they’re bigger than the Texas state bird, the Northern Mockingjay, and almost the same size as the Pennsylvania state bird, the Ruffed Grouse.

Their wingspan is typically around 5.9 in (15cm) long.

Scissor-tailed flycatchers can travel up to 65mph.

The scissor-tailed bird can live for approximately five to ten years (or longer), depending on its habitat.

This bird relies on its insectivorous diet consisting of ground-dwelling insects such as grasshoppers, crickets, and flies. This diet benefits farmers and ranchers whose vegetation became infested with non–valuable and harmful insects.

Moreover, these birds are omnivorous, which explains why they eat small fruits and berries as a complementary food, especially when insects are scarce.

Oklahoma’s state bird doesn’t just live in Oklahoma. This migratory bird species is endemic to North, South, and Central America, with its population spread across the diverse landscape in these regions.

Hence, other than Oklahoma, it’s easy to see the flycatcher bird in Georgia, Florida, Texas, and more.

In Oklahoma, these flycatchers’ breeding season occurs from late summer to mid-winter.

Once they’ve paired off, the female flycatchers lay one to three eggs in cup-shaped nests, sometimes reaching six in a clutch.

These flycatchers secure their eggs by building their nests far from their ground-dwelling predators. These nests are typically on trees and man-made poles, including utility lines and fences.

They construct their cup-shaped nests from weeds, twigs, grass, and small pieces of strings and paper. 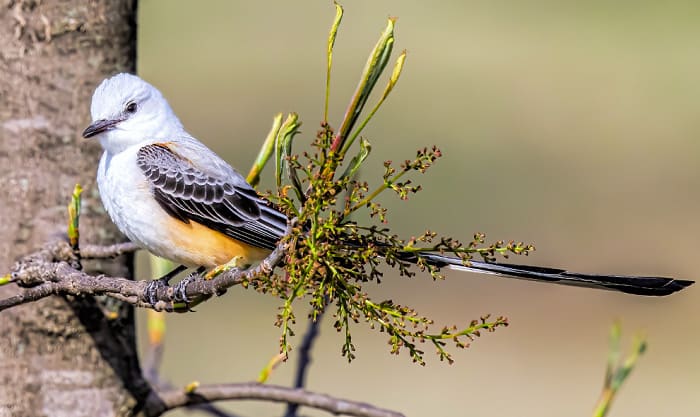 The scissor-tailed bird holds an exceptional beauty and charm that undoubtedly made it Oklahoma’s official state bird.

There’s much to learn about this feathered representative, so let’s answer the frequently asked questions about this flycatcher.

Why is the scissor-tailed flycatcher chosen as the state bird for Oklahoma?

When was the scissor-tailed flycatcher proclaimed as the state bird for Oklahoma?

As the pictures depict, the scissor-tailed flycatcher has a long, sleek, and recognizable forked tail in distinct black and white.

Meanwhile, its body has a gray plumage, white underbelly, and specks of red or salmon pink under its wings, connecting it to the flycatcher’s body.

Male and female flycatchers resemble each other, except for females’ lighter coloring.

What is unusual about the state bird of Oklahoma?

As its name suggests, the scissor-like tail of Oklahoma’s state bird makes it unusual among other birds. Apart from its extravagant appeal, this tail helps the bird easily capture its prey with elegance.

These flycatchers are not an endangered species. However, they fall under the Least Concern category, as the IUCN Red List suggests.

Although they aren’t endangered, there’s a decline in this species’ population due to habitat loss.

Like other states in America, Oklahoma has its official state bird to represent its territory. Therefore, what is the state bird of Oklahoma? On May 26, 1951, the law officially designated the scissor-tailed flycatcher as Oklahoma’s state bird.

This scissortail bird’s nesting ground centers in Oklahoma, solidifying its throne as the state’s feathered representative. On the other hand, these birds also benefit Oklahoma and its people through its diet, which primarily consists of insects.

We hope this post helped you learn more about the scissor-tailed flycatcher, not only Oklahoma’s state bird but also an animal with unmatched beauty and grace.