Who would have thought that the classic story of being ignored to being known as a state’s pride could also be a story of a medium-sized bird from grasslands?

So, what is the state bird of Oregon? It is no other than the Western Meadowlark (Sturnella neglecta). It was officially proclaimed in 1927 by Governor Isaac Patterson.

All About the Western Meadowlark State Bird

Oregon Meadowlark might look like a gentle creature, but its loud singing will surely wake you from your deepest sleep. Here are the six amusing facts about the Oregon state bird.

Back when it wasn’t formally introduced by American ornithologist John Audubon, Western Meadowlark was literally overlooked and mistaken as the same species as the Eastern Meadowlark.

This can explain their scientific name of Sturnella neglecta which translates to “starling,” imposing on the birds’ similarity, and “neglected,” as in being ignored in Latin.

But thanks to their loud calls, western meadowlarks can now stand out.

Their songs are extremely loud and throaty. In fact, you can easily spot them due to their recognizable singing even from a great distance.

Beginning with a flute-like singing, their rambling notes will tone down pleasantly. And when the night comes, they will occasionally sing about 12 songs lasting from seconds to minutes.

Now, everyone, including scientists, loves their recognizable singing and names them thunderchunks after singing as loud as thunder.

Fact #2: Chosen by the schoolchildren

With more than half garnered votes from Oregon school children (40,000 over 75,000), the Western Meadowlark gained its title in July 1927 after the proclamation of Governor Isaac Patterson.

It is interesting to note that the Western Meadowlark is the only official emblem that is not selected by the state legislature.

Fact #3: One step away from re-designation 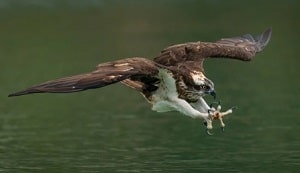 On the downside of not being picked by the legislature as a state bird, there is now a resolution that has passed the Oregon House to re-designate their state bird.

The Senate has argued that Osprey is better than the Western Meadowlark, and the major flaw is that the Meadowlark is already a state bird of five other states (North Dakota, Kansas, Nebraska, Wyoming, and Montana).

Additionally, surveys reveal that the Western meadowlark population and habitat are decreasing, and if no action is taken, they might be listed as endangered.

So instead of safeguarding their environment, it was thought that they shifted to just re-designing a new state bird.

As a result, this suggestion angered the current state bird lovers. Meanwhile, the Audubon Society led a protest to hold a new contest, but the legislature insisted on the Osprey.

The Western Meadowlark is about a maximum of 10 inches in length, 4 ounces in weight, and 16 inches in wingspan. Just to imagine, they have a comparative size to a robin.

They can be recognized by their yellow plumage since they belong to the family of Icteridae, which literally translates to “jaundiced ones.”

Specifically, they have a prominent bright yellow on their stomach area and a “V” on their neck that changes to gray during winter.

Their head colors are composed of brown stripes, while their short tail is displayed in white.

Even though we cannot see in our naked eye the difference between male and female Western Meadowlarks in colors, these birds do! With the help of ultraviolet light, females will reflect the light in distinct ways.

Earlier, it was mentioned that Western Meadowlark was confused as the same bird as the Eastern Meadowlark, and this is because they almost look the same.

It was credited to Meriwether Lewis, the explorer, who first discovered that they are of different species from their slightly different bills and distinct songs.

Western Meadowlarks are omnivores. You can expect them to forage on the ground for berries and seeds. Their bills are well-built for picking these foods, especially in digging the soil for insects such as bugs, ants, and worms.

In flight, they take off like a quail, their wings gliding horizontally low with alternating quick wingbeats.

Males of these birds enjoy singing at heights like poles and fences, especially during dry seasons. They are territorial and would sing or fight to protect their breeding sites.

As a matter of fact, their lookalike, Eastern Meadowlarks, is one of their potential foes when it comes to competing over territories.

But their main predators are the fox, cats, and hawks, which can shorten their lifespan from 12 to only 10 years.

Additionally, they are not aggressive to human beings. Despite that, it doesn’t make them good pets. They have not been domesticated and are protected by the Migratory Bird Treaty Act. 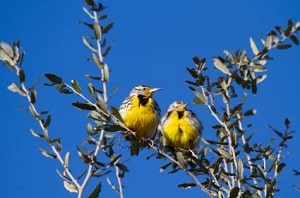 Spring and summer are the preferred breeding seasons for the Western Meadowlark. Using their loud calls, they sing to find their mates; males tend to have two mates simultaneously.

Though it sounds pretty tiring, only the female birds will build the nest and shade after breeding. Situated on the ground, both parents will incubate the eggs for 13 days or more.

The laden 5-6 eggs, measuring approximately 1 inch, will hatch with closed eyes and pinkish color. Until these nestlings are ready to leave, they will continuously be fed by both parents.

And if you are wondering if western and eastern meadowlarks ever interbreed, the answer is no. They do not even interact with each other!

Now that we have uncovered what is the state bird of Oregon, we can all say that Western Meadowlarks deserved its title.

These birds might not be recognized at first sight or not as strong as the Osprey, but they have their charm of call notes, the brightness of yellow plumage, and remarkable territorial and nesting behaviors.

What are your thoughts about the Oregon state bird? Let us know your opinions!

In addition, each state has its own types of featured birds, here are some states you can explore: