Pileated woodpeckers, red-winged blackbirds, and ospreys are some common birds that hover over the 432-mile (695 km) breadth of Tennessee.

So, what is the state bird of Tennessee? Well, it is none other than Northern Mockingbird (Mimus polyglottos). It was officially recognized on April 19, 1933, and should not be confused with Bobwhite Quail, the official state game bird of Tennessee.

The Northern Mockingbird has a long history that began with it being an expensive caged pet before populating Tennessee again once the trade ended. This official state bird is now protected by the Migratory Bird Act and is illegal to keep as a pet.

Here are the 5 astonishing facts you never knew you needed to hear all about mockingbird.

Fact #1: Voted by the public 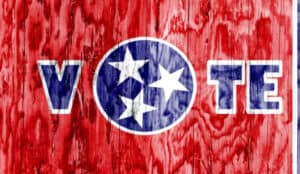 The TN state bird, the mockingbird, gained its recognition fair and square through public voting.

It started as a campaign by the state government, the Tennessee Ornithological Society (TOS), and the Federation of Garden Clubs. The TOS later conducted an election to let the residents vote for their desired state bird.

The affection for this medium-sized bird resulted in the Tennessee Senate Joint Resolution No. 51 designating the Northern mockingbird as the state bird.

Like its scientific name, Mimus polyglottos, which translates to “many-tongued mimic,” this feathered friend is famous for its imitation ability.

The most remarkable thing about the mockingbird is they can have up to 200 songs in their repertoire, most of which are imitations of other avian species. That said, mockingbirds can also imitate the sounds of other animals and even electronic devices.

Interestingly, while their vast repertoire can contain their own song, the species do not have a signature sound (such as the American Goldfinch with their tell-tale “potato” call). Instead, each individual mockingbird will develop their own melody.

Even though both female and male mockingbirds can sing, the latter has a stronger voice that can last into the dark of the night.

Information on mockingbirds suggests that while the female rarely sings in the summer and sings more in the fall to secure a territory, the male will have two different portfolios for the spring and the fall.

You can enjoy mockingbirds’ lovely songs in Tennessee and other Southeast regions, such as Alabam, Georgia, or Oklahoma. 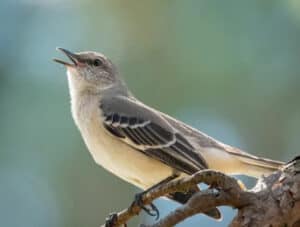 Overall, Northern Mockingbirds have gray feathers with a hint of brown. Their paler colors make it easier to distinguish the species from their relative—the brown thrasher (state bird of Georgia), who can also mimic songs.

In addition, these avians have a touch of white bars on their wings, which typically span from 12.2 to 13.8 in (31-35 cm). The species typically display dizzying “wing flash” to distract prey like insects.

You perhaps know that Mockingbirds are good mimickers, but did you know that they are also fierce in protecting their nest and territory?

Do not try to mess with these feathered friends, as they see humans, cats, dogs, and other bird species as predators. In fact, they may even fight other mockingbirds to protect the territory. The birds are so aggressive that they might even attack their own reflection.

It turns out that the Tennesseans were not the only ones to fall in love with the mockingbird. Accordingly, it is the state bird of not only Tennessee but of four other states too.

Does Tennessee have 2 state birds?

However, if you search for Tennessee state symbols pictures, you’ll be more likely to come across images featuring the state bird and flower: mockingbirds and Iris. This proves once again how popular the mimicry bird is in Tennessee.

Why is the Northern Mockingbird the state bird for Tennessee?

When did the Northern Mockingbird become the state bird for Tennessee?

According to the Nashville Banner, the Northern Mockingbird became the state bird for Tennessee on April 19, 1933, just a few days after the voting that took place on April 11, 1933.

Can I pet the Mockingbird?

The short answer is no. Aside from the fact that it is illegal to capture them if you reside in the United States, their long history indicates that the pet trade almost drove them to extinction. In addition, mockingbird Tennessee is exceptionally aggressive!

What are the east Tennessee birds?

May you not know, the Mimus Polyglottos also represent other states. Click the following article for more:

Now that you have learned what is the state bird of Tennessee, we will be delighted to know about your encounters with the Northern Mockingbird and its songs.

These brown-colored and long-tailed birds are undeniably famous across 5 states thanks to their ability to imitate sounds. But the next time you see them, be careful not to threaten them, as they may attack you!

If you find this article helpful, kindly share this post with your friends. And if you have anything amazing to add, kindly share your thoughts. Thanks for reading!