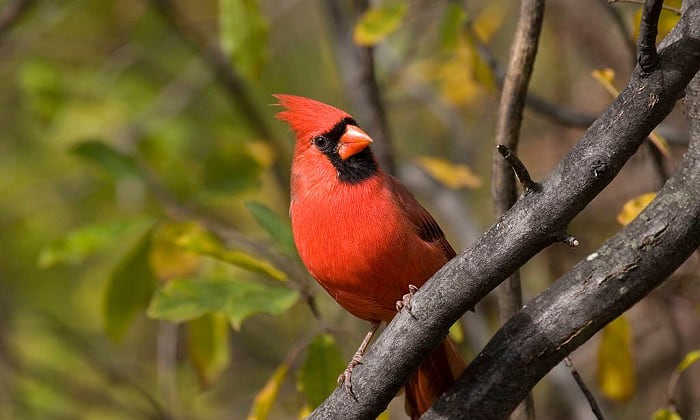 The state of West Virginia is located in the southeastern part of the United States. It is called the mountain state because it is the only state that is found completely within the Appalachian Mountain Region.

Because it is a mountainous area covered mostly with forests, it is a biodiverse area. Consequently, it is home to a variety of animals and 300 species of birds. That’s a lot of birds!

But among them what is the state bird of West Virginia? Among the red birds in WV, it’s the eye-catching Northern Cardinal.

Quick Facts About the Northern Cardinal 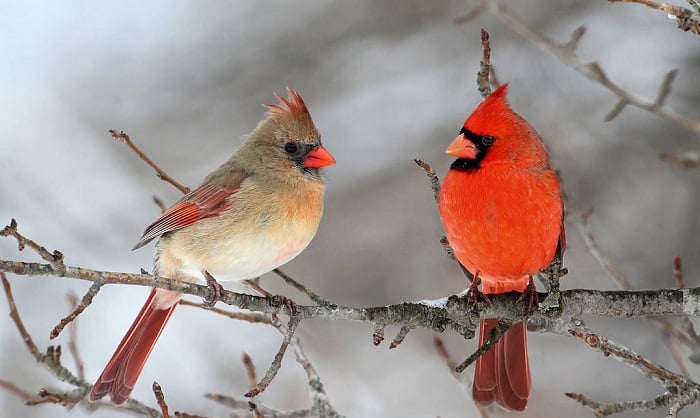 On March 7, 1949, a house bill officially designated the Northern Cardinal as the state bird of West Virginia.

Aside from West Virginia, other states have adopted this well-loved red bird to represent it as a state symbol. Other than Virginia, the Cardinal symbolizes the following states: Kentucky, Illinois, North Carolina, Indiana, and Ohio.

The Northern Cardinal is a passerine songbird bird of the genus Cardinalis. Birds under this classification have a distinctive crest, and their bills are thick and conical.

The male and female are sexually dimorphic, the male is bigger than the female in size, and they exhibit different colors.

Also, both male and female cardinals have thick, cone-shaped bills. The color of their beaks is bright orange or coral.

The male cardinal sports a vibrant red plumage all over its body with darker coloring on the wings and back. The red color of the male feathers comes from a substance in their diet, specifically carotenoids, which they can get from eating berries and wild grapes.

The color of the male cardinal’s face mask is black. Their plumage colors do not change during winter and will retain these bright and contrasting colors of black and red all year round.

A female northern cardinal has a subdued brownish color with tinges of red on its pointed crest, wing feathers, and tail. It has a grayish mask over the eyes.

Northern cardinals are non-migrating birds. Their numbers are distributed throughout North America. Many are found in the Southeastern United States and parts of Canada.

These birds are commonly spotted in parks and backyards. The northern cardinal bird habitat of preference is the open woodlands and a number of them are found in forests, marshlands, and shrubberies.

The male and female Northern cardinals are sexually dysmorphic not just in appearance but in the sounds they emit during singing. A northern cardinal song is influenced by the local dialect, which may account for the regional differences in their songs.

For some species, only the male birds sing, but the state bird of WV is special because both males and females sing. The quality of their song is usually described as a clear whistling sound. Some versions of their songs may sound like “whoit, whoit whoit” or “cheer, cheer, cheer.”

Their call sounds like a simple metallic chip that they may emit when defending their territory or calling or warning their partners. 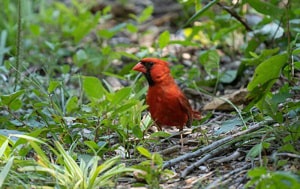 The West Virginia cardinal is a ground forager. It will look for food such as seeds, fruits, and grains by hopping around shrubs, trees, and weeds. Cardinals are omnivores, meaning they have a predominantly plant-based diet but also eat insects.

They like black oil sunflower, suet, and Nyjer seeds. Fruits and berries are also part of their diet, which are rich in carotenoids.

The relationship between a pair of cardinals is usually long-term, and they may mate with the same partner for years. The male Cardinals are very territorial, especially during the breeding season. They also help in nest-building by bringing materials to the female, who constructs the cup-shaped nest mostly on her own.

The female incubates the eggs for 12-13 days. A clutch usually contains 3-4 white to grayish or bluish cardinal eggs with specks of brown or gray. The male cardinal helps find food and feed the nestlings. A pair of Northern Cardinals may raise 2-3 broods a year. 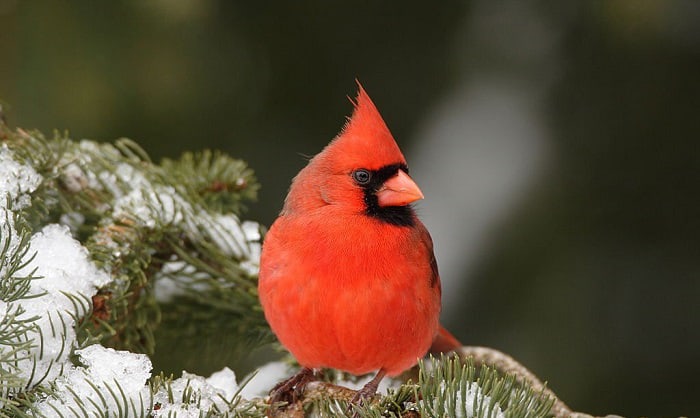 Why is the cardinal West Virginia’s state bird?

The Northern cardinal was voted as the state bird in 1949. Public school students, members of civic groups, and sports and birding organizations took part in choosing the state tree and the state bird of West Virginia during this election.

The northern cardinal state bird was chosen over ten other birds, including the robin, tufted titmouse, and the bluebird.

It was declared as the official state bird on March 7, 1949, by the authority of a house bill. The state tree that was chosen in the same election is the Sugar Maple tree.

What does the state bird of West Virginia look like?

The male Northern cardinal is striking because of its bright red feathers. They are called “cardinals” because this color is similar to the robes worn by cardinals of the Roman Catholic Church.

In contrast to the male birds, the female has predominantly brown feathers with a touch of red on the wing, rump, and crest.

If you look at some West Virginia birds’ pictures the Northern cardinal may be the most photogenic red bird because of the male’s bright red plumage.

These birds are non-migratory and are found perennially in Southeastern states such as Alabama and Tennessee. They are diurnal creatures, flying and foraging during daytime, and are known for their distinct songs and calls, as described above in the previous section.

What are the notable state symbols of West Virginia?

Aside from the state bird and flower, the Northern Cardinal and Rhododendron, respectively, there are other notable symbols for the mountain state. The state animal of West Virginia is the Black Bear which was officially adopted as such in 1973.

West Virginia’s state motto is in Latin: Montani Semper Liberi and is reflective of its geography as a mountainous region. It means “Mountaineers Are Always Free.” The state motto is also emblazoned on the state flag and state seal of West Virginia.

Additionally, the Northern Cardinal also represents other states. Some examples you can learn more:

When you visit the state of West Virginia, there are many things to do in this scenic state. If you are a twitcher, you can take your camera and do some Northern Cardinal photography WV to document this photogenic and well-loved bird.

Now that you know what is the state bird of West Virginia and a lot more about the Northern Cardinal, we hope this article was helpful in your search for answers about this red bird of WV.