The cardinal (Cardinals cardinals) is quite a joyful sight with its bright red color and cheery songs. In North Carolina, this kind of bird can be seen everywhere, especially in yards, meadows, and parks.

Cardinals are songbirds; they build their nests less than four feet from the ground. You might be already aware that they are naturally weed-eaters, though they also like insects and fruits.

And so, if you want to know ‘what is the state bird of North Carolina?’, the easy answer is the cardinal. Let’s go find out more about this amazing avian.

Why the Cardinal Is Chosen as the State Bird 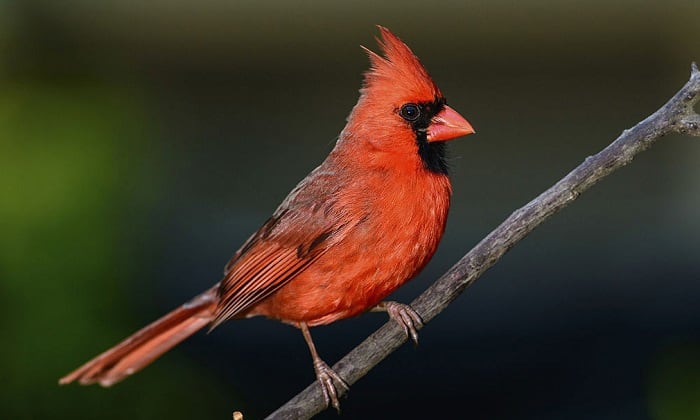 The cardinals consume weed seeds, which is good for any garden. Plus, these birds eat insects prevalent in gardens and farms.

Indeed, the cardinals can help in maintaining the beauty of gardens and the production of the region’s farms. Therefore, North Carolina chose this bird species as their state bird. And the process of decision is made easier thanks to the recommendation of The North Carolina Bird Club.

The said organization obtained the opinion of the residents through a survey. The result is an accumulation of over 28,000 votes for the twenty-six birds for consideration. And the cardinals received the highest at 5,000 votes, which, of course, increased their chances of being picked as the state bird.

Overview of the Cardinal

The cardinal bird is called cardinalidae. It is also known as the Northern cardinals, Redbirds, Winter redbirds, and cardinal-grosbeaks. It is a member of the New World endemic passerine avian family.

On March 4, 1943, North Carolina declared the cardinal as their state bird. And since then, almost anywhere you go in the state, you can find cardinals in residents, backyards, and parks.

To many’s surprise, the cardinals are never meant to be house pets. These songbirds belong to the wilderness, though, of course, they are also fond of visiting human properties. This kind of bird species can survive for 13 to 15 years. And the best thing is the cardinals are monogamous creatures.

The female cardinals take care of the nest while their mates hunt for food during the nesting period. The incubation time is 11 to 13 days for the 2 to 5 eggs to hatch. While apart, the cardinals communicate through songs. The male cardinals’ song sounds like “cheer-cheer-cheer”, while the mother bird sings “purty-purty-purty”.

Physical Attributes of the Cardinals

Cardinals are medium to large songbirds, with heavy cone-shaped bills and black crests. These birds have a length of 8 to 9 inches, with a wingspan of 10 to 12 inches. Plus, they weigh 1.4 to 1.7 ounces.

The male cardinals are noticeable with vibrant blue plumages, yellow, and scarlet red. We can notice the female birds when noticing their brown wings with a light shade of red. 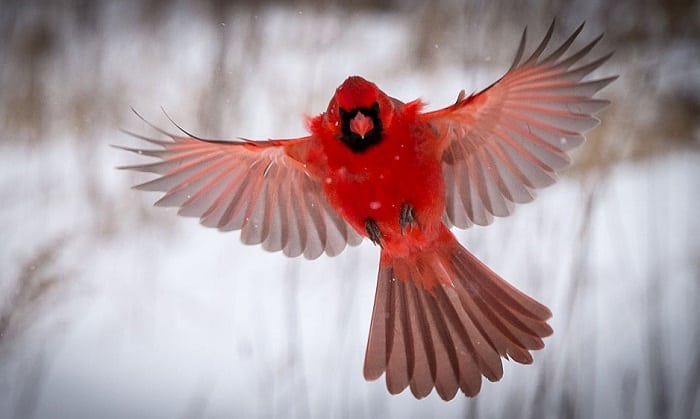 These red avians do not migrate but rather stay in one place to nest, mate, and hunt for food. Now, we’ll discover a couple of facts about the cardinals.

And the songbirds use their language to communicate when it’s mating or when it’s time to look for food. Additionally, the female cardinals’ songs are more complex than their mate’s.

The brightly red-colored cardinals always visit the North Carolina residences. However, only the male species are actually seen most of the time.

Meanwhile, the female cardinals rarely come to yards or parks where people are. Instead, these birds often reside in their nests to care for their babies and protect them against predators.

The vibrant red bird is indeed famous and beneficial for multiple states.

The North Carolina state bird is quite obsessed with its security. In fact, their territorial tendency increases during the spring and summer seasons.

The cardinals are intense in protecting their territory and are willing to attack whatever threatens their space.

But after summer ends, the male cardinals lose their aggressiveness. The interesting thing is, this is not the case for their mates. The female cardinals continue to harbor territorial tendencies for half a year more.

Cardinals are seed-eaters, and they especially love sunflower seeds. So if you want to attract this kind of bird species to your birdbath and bird feeder, then the best food to lure the cardinals are sunflower seeds. And if there is a need to trick the birds into getting out of your garage or porch, then use their favorite food to get them out.

The name cardinal is actually derived from the real-life Catholic cardinals. This is because of the distinguishable bright red cardinal clothing that resembles the avian’s vibrant color. The name of the bird was given during the founding colonists of the United States.

North Carolina cardinals are affectionate creatures that are loyal to their mates. While the male birds are courting their potential mates, they hunt for food and feed them to the female cardinals.

However, the feeding process is kind of special, and looks like the cardinals are kissing. The male feeding to the female is adorably referred to as beak to beak.

The cardinal is undoubtedly a famous bird that symbolizes many things, and it is used as a mascot. The Arizona Cardinals NFL and the St. Louis Cardinals baseball team use the cardinal bird as their mascot. This bird is also used by numerous colleges such as Concordia University, Ball State University, Wesleyan University, the University of Louisville, and Lamar University.

However, the sad part is, some of the mascots do not perfectly portray the physical appearance of the cardinal. Sometimes the mascot’s legs or beak are yellow, and other alterations.

The pigments of red, orange, and yellow found in plants are why the cardinals have red feathers. The pigments are referred to as carotenoids, and they are transferred to the birds through ingestion. And the cardinals get them through consuming insects that eat the plant pigments.

Now that you know what is the state bird of North Carolina, we hope you have gained additional knowledge about the cardinals. This bird is indeed interesting. And humans can learn from them in terms of loyalty, communication, and a show of affection. Unquestionably, the state of NC was not wrong in choosing the cardinal as their state bird.

We hope you enjoy this post and feel free to share it on your social media. Please keep in mind that your comments and thoughts are welcome, so let us know what you think.

Furthermore, discover our article about other state birds like: