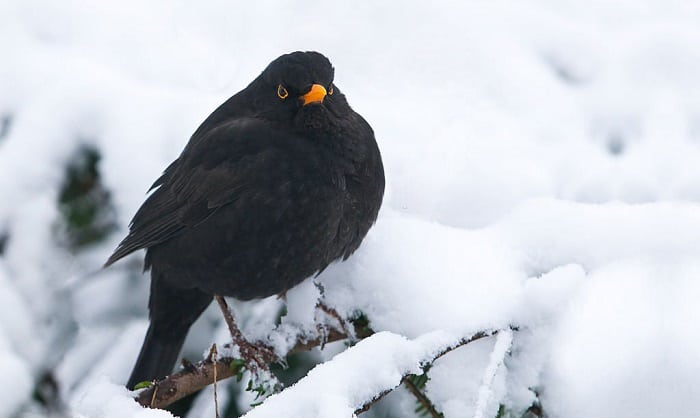 What does a blackbird look like? At first glance, you will see a black feathered bird. But under the sunlight, a male blackbird will proudly display its feathers shimmering in green and dark blue on top of the black. Females, on the other hand, appear brown in broad daylight.

However, seeing an image of a blackbird and reading its description might not be enough to identify this avian. With tons of black birds flying in America, you can easily mistake one for a blackbird.

So, let’s delve deeper into a more informative identification of a blackbird. 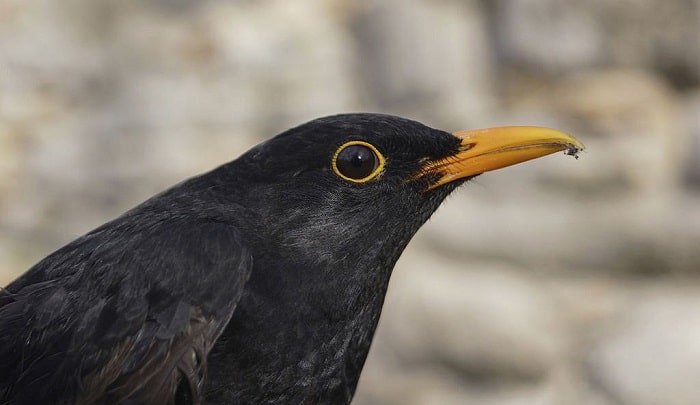 Blackbird has a scientific name, Turdus merula, which directly translates to “the blackbird” in Latin.

It is part of the thrush family and is sometimes called the Common blackbird or Eurasian blackbird. These birds are regular visitors to many lawns and are seen rummaging through fallen leaves, searching for worms.

Male blackbirds have predominant black feathers. In comparison, females and younglings are reddish browns with dark striped beaks. They also have other colors, such as white, yellow, and red in some parts, depending on their species.

Blackbirds will perch on high places like chimneys and treetops and sing their songs. That is why their song carries well. The tone of their songs is soft and relaxed, which many love.

Their alarm calls are the complete opposite of their songs. It is a series of explosive and piercing chatters. You can hear a variety of ‘chuck’, ‘chink’, and ‘tsee’ depending on the situation.

Blackbirds’ nesting season is from March to July. Throughout this period, they’ll have approximately two to three broods. The female can lay up to five eggs, which are then hatched for 14 days.

The baby blackbird feeds on caterpillars and earthworms until they are fledgling. The male cares for the young birds’ whiles the female gets the nest ready for the next brood.

There are around 26 different blackbird species. We have five of them with a simple black bird identification guide to help you tell them apart. 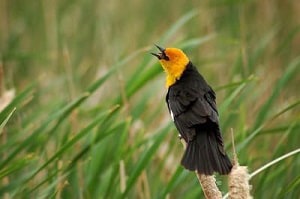 The yellow patch on these black birds is on their head and breast. Both males and females have these, but that of the latter is duller and smaller.

Yellow-headed blackbirds are easy to spot with their flashy yellow and black color. They are also known as bad singers with their weird, strangled sounds. 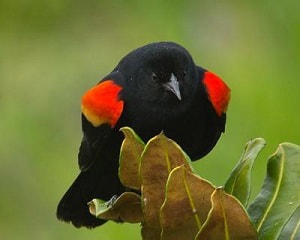 The red spots on the shoulder of these birds are donned by males. The females don’t have a patch of red or black on their wings, only speckled brown.

Red-winged Blackbirds are very common in North America, especially in Alabama. You can spot these blackbirds all year in Mississippi. 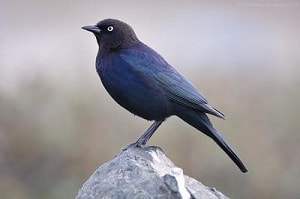 This large black bird with black beak is very common, the typical blackbird. They are often mistaken for grackles, but if you look closely, they have shorter tails.

Most of the season, male rusty blackbirds have dull black. The color is more prominent during autumn and winter. It appears as sprinkled rust layered thickly throughout their head, breast, and back.

Rusty Blackbirds are declining in number and are now uncommon in many areas. Their population lives in northern bogs and winter swamps. 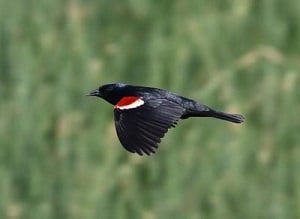 This small black bird has an impressive color, with its red shoulders lined with white.

The tricolored Blackbird is listed as endangered. This is because of habitat loss from extensive agricultural practices on fields where they build their nests. Despite their decreasing number, you can still find them in large flocks. 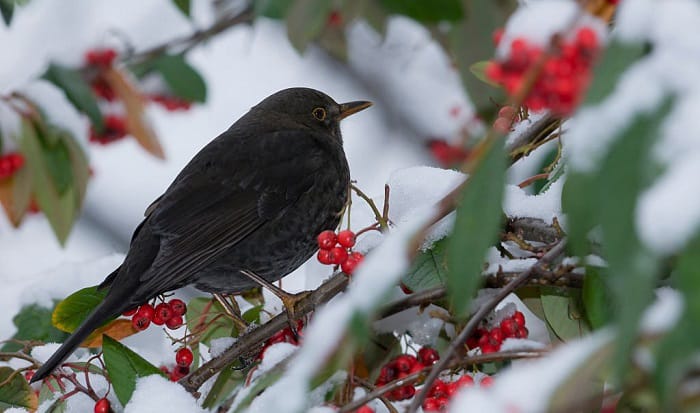 What does it mean when a blackbird visits you?

If you have an encounter with a blackbird whether in your dream or reality can either mean good or bad. This will depend on the bird’s actions and the situation, but blackbirds are generally linked to sincerity, secrecy, and the unknown.

Blackbirds are deemed as shapeshifters. They can act as your guide through the dark path and into deep self-knowing. There are many mysteries to unravel, and these birds are here as reminders of your ability to understand and build a connection with yourself.

What is the difference between a blackbird and a crow?

The Red-billed Coughs, with their black plumage, are often confused for blackbirds with red beak when, in fact, they are part of the crow family. The crow and blackbird share the same plumage color, but these two are subtly different in their physical features and behaviors.

How do you tell the difference between a blackbird and a starling?

The blackbird and starling are both common bird species in North America. While they share the same plumage color, they have certain qualities that set them apart.

We have a detailed section about the blackbird, so in this part, we will focus on the starling. These are some of these birds’ unique characteristics:

How to distinguish brewer’s blackbird vs grackle?

Here’s a simple comparison of the distinct characteristics and features of these two species:

Blackbirds are primarily sedentary, staying close to their residence all year. But some migrate like the ones in northern Europe that travel to the south to find a more abundant food source and warmer climate. They don’t go too far, only a few miles until they find food that is not dried up or frozen.

After reading this article, you went from asking “What does a blackbird look like?” to identifying a picture of a blackbird effortlessly. We included helpful and interesting information on how to distinguish blackbird species from each other to further help with bird identification!

We hope this post answers all questions you have about this awesome bird. Is there anything more you want to know about the blackbird? Do you have a memorable encounter with them? Share them with us in the comment section!