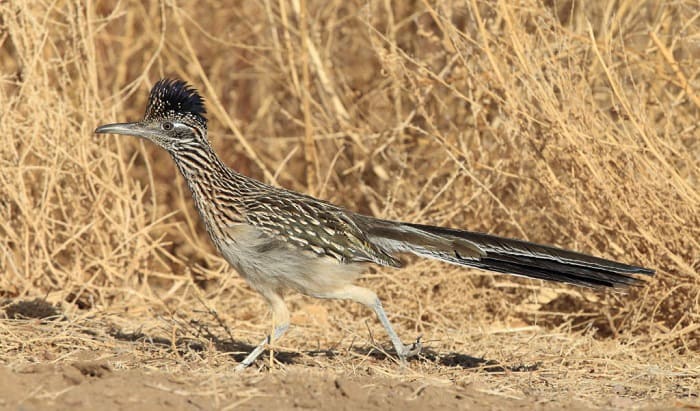 New Mexico is recognized to be “The Land of Enchantment,” and for good reason. The state is filled with exquisite high-reaching mountains, extraordinary deserts, relaxing hot springs, and outstanding national monuments. The diverse culture in New Mexico is shaped by the influences of Mexicans, Native Americans, and European Americans.

Unquestionably, this beautiful state is full of people who love nature. No wonder they pay great attention to their state bird. But, what is New Mexico state bird, you ask. Well, the answer to your question is the Greater Roadrunner.

Scientific Classification of the Greater Roadrunner 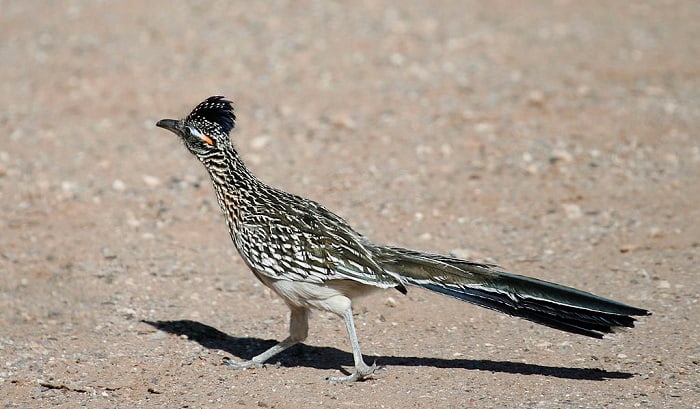 The state bird of New Mexico is the Greater Roadrunner. It was adopted into the culture and history of the state and recognized as the state bird by the State Legislature on March 16, 1949.

Description of the Greater Roadrunner

New Mexico’s state bird has a unique appearance, and so no one can mistake it with another species.

This bird has long legs, with feet that formed an “X” and with the color combination of black and white. The Greater Roadrunner measures 50 to 61 cm in width, with a height of 25cm to 30cm. It is a ground bird that has a white-tipped tail, distinguishing head crest, and a bill that is very large.

Additionally, the Greater Roadrunner has rounded wings that are short – at 43 to 61 cm. The wings have a natural white crescent. The back feathers of this bird are in the color family of dark gray and olives. And each bird weighs around a quarter of a kilogram to almost half a kilogram, which is heavier compared to other avians.

The Greater Roadrunner has a white belly, a pale brown or white upper torso and neck, and each of its eyes has a blue and orange patch. When you look at this bird’s toes, you’ll see that they are brown with interesting gold spots.

Interesting Facts About the Greater Roadrunner 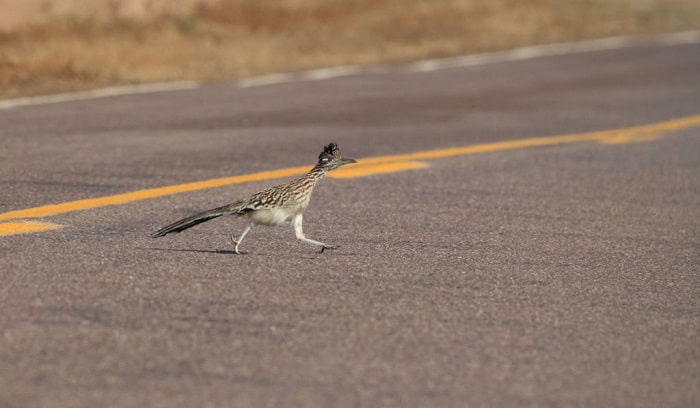 The Native American people believed that supernatural powers lie in the bird’s spirit. And ancient stories say that when people are lost, this ground avian can lead them back home.

Aside from myths, there are other interesting facts about this bird.

The New Mexico roadrunner has other names such as chaparral cock, el paisano, snake killer, ground cuckoo, and el correcaminos. It is the larger of the two ground avians, the other being the lesser roadrunner.

The Greater Roadrunner can be found in the desert, forest, and prairie. This bird species is fond of staying at low perches as they seek for their prey. They prefer to live at 7,000 feet low elevation because they cannot fly high and long.

Greater Roadrunners are cautious about their privacy, and so their nests are hidden from sight.

When the temperature reaches 68F, these birds seek warmth from the sun. And when the weather is windy or cold, they hide in rock formations and thick vegetation.

This ground bird prefers to run or walk rather than fly, mainly because it has a large body with short wings. Nearly no human can outrun the Greater Roadrunner, unless you can surpass the speed of this bird, which is 20 miles per hour.

When it comes to excretion, this kind of avian re-consumes the liquid from its feces prior to the excretion process. And this bird species does not make use of the urinary tract. Instead, the nasal gland is used.

There are seven different vocalizations of a Greater Roadrunner. Both male and female avians can emit a cooing sound that can reach up to 300 meters.

The most popular vocalization is a set of five to six chatters that is followed by a loud groaning sound. This usually happens during the incubation time and the raising of the new chicks.

Greater Roadrunners are admirably monogamous. Greater roadrunner couples work together during the nesting season. The male partner acquires the materials for nesting, and the female partner does the work on nest construction.

Breeding takes place from March to October. This New Mexico bird lays up to six eggs and waits for 20 days for the eggs to hatch.

In 1969, the state of Mexico made “Dusty Roadrunner” its symbol. The mascot’s purpose is to motivate people to work hard, appreciate the beauty of the state, and maintain its cleanliness.

Now that you know what is New Mexico State Bird or what state bird is the roadrunner, you have a new reason to visit the picturesque state. The Greater Roadrunner is definitely an interesting avian that represents the state of New Mexico perfectly.

We hope you enjoyed reading this post. Kindly take the time to share this to your friends. And leave us a message before you go. We’d love to hear from you.

Furthermore, discover our article about other state birds like: