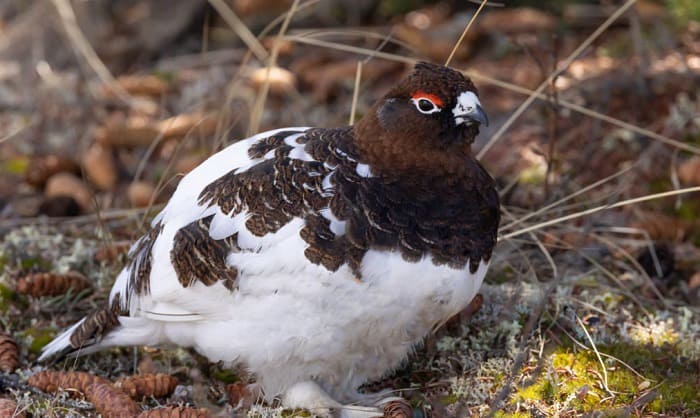 What is the state bird of Alaska? In 1955, the state of Alaska chose the willow ptarmigan as its representative bird. This arctic grouse is a master in camouflage, with its plumage shifting in color as the seasons change.

Read on to learn more about this species. 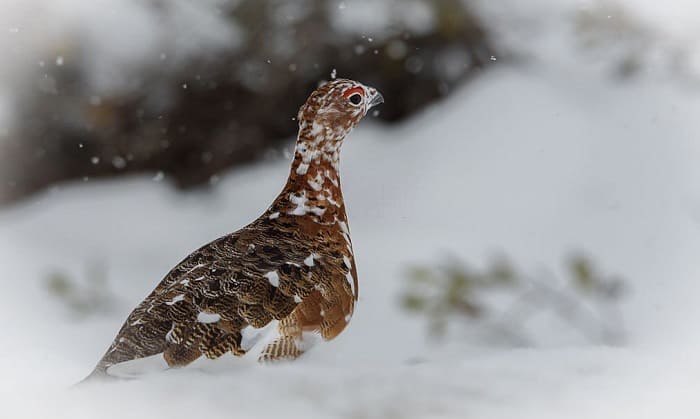 The Land Of The Midnight Sun has a majestic wilderness, with the forget-me-not as its national flower and the Sitka Spruce as the state tree. But why is the willow ptarmigan Alaska state bird?

There are three subspecies of the ptarmigans, which are the winter rock, white tailed, and willow. However, the willow is the most common breed in the state. Plus, the male willow ptarmigans are the only grouse that stay with the nest to protect their family from predators.

The Alaska national bird protects itself from enemies by camouflaging their appearance. In fact, it’s difficult to spot the willow ptarmigans when they’re in their natural habitat. During the summer, their plumage is pale hazelnut, and in the winter, it is mostly white.

Willow ptarmigans are experts in adapting to their surroundings. They can camouflage themselves from predators such as gulls, foxes, golden eagles, short-tailed weasels, ravens, hooded crows, and northern goshawks.

And combined with their shifting diet, this avian species can survive for two years.

In the summer months, the feathers of the male grouse is blotted brown with a crimson shade in the chest and nape. Males have a semicircular red crest, black tail, and white belly with specks of brown. The females have a similar appearance, but their eye combs are not as big as the males.

One of the interesting Alaska state bird facts is the shift in the diet of the willow ptarmigans.

In the summer, this bird species is fond of munching on insects, twigs, flowers, berries, seeds, buds, and leaves. And when winter comes, their food preference changes to sprouts of willows and catkins.

Indeed, this arctic grouse knows how to adapt to its environment. Their diet coincides with the availability of food in each season. So even with the scarcity of food in the winter months, the Alaska’s state bird still thrives.

No animal species in the world can ever survive without procreating. And the willow ptarmigans are no exception. When the breeding season arrives, this arctic grouse species seeks for a spot outside the arctic circle and in mountainous areas.

The nest locations are on the ground with dense vegetation. Female willows utilize feathers, moss, leaves, and grass to create a 4.7” deep nest.

The hatchlings feed on plants and insects, but as they grow into adulthood, they become herbivores.

Compared to humans, these birds mature very quickly. Just within six and twelve hours, the young willows leave the comforts of their nest. The sad part is, less than 35% of the young birds live to celebrate their first year on earth.

7 Facts About the Alaska’s State Bird 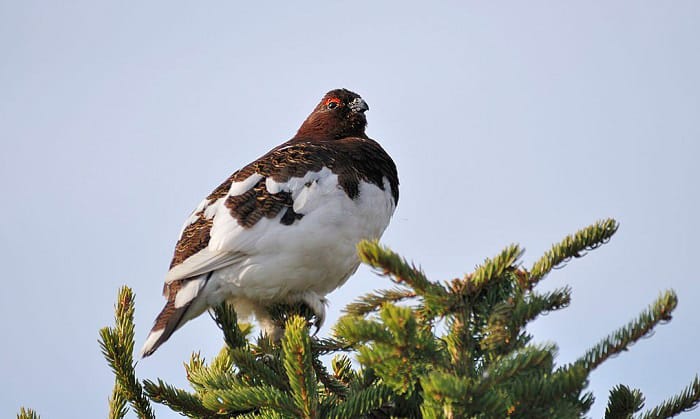 Because of their ubiquity in Alaska, there is a common joke that the mosquito is actually the bird of the state. But of course, officially it’s the willow ptarmigan. Come find out a couple of facts about this arctic grouse.

Alaska is always very cold all-year round. There is definitely no escape from its freezing temperature. To deal with this reality, humans have thick clothes, long coats, and furnaces at home.

Meanwhile, the Alaska state bird name the willow ptarmigan has feathers on its feet known as the snowshoe. Thanks to this body attribute, this avian species can handle the frosty ground.

Once the willow ptarmigans detect the coming of winter, they gather in large flocks for migration. This bird species migrates usually to the south of the state.

And when summer comes, the large flocks go their separate ways. Though this bird species is sociable in nature, they became territorial during the breeding season. And so they need their space to find the most suitable nesting ground.

State symbols are extremely important for Alaska. We all know that its national bird is the willow ptarmigan. But some people are confused on exactly when this arctic grouse got its official title.

Although Alaska picked the ptarmigan to represent it in 1955, it wasn’t until 1960 that Alaska became a US state. This is why you may consider 1960 the official year the ptarmigan became a state bird.

The state bird of Alaska starts the mating season in April. The males set off to seek a breeding location. Then, they try to attract their target mates through a fascinating flight performance. And then the females choose the males as their partner.

When migration time arrives, the mating partners go their separate ways. The young birds go with their mothers to somewhere far from the breeding location. And in the next breeding season, the willow ptarmigans find new mates.

The calls of the willow ptarmigans are the favorite bird songs of Steven Spielberg. The American film director and producer have used the calls for his popular movies. These famous films are Jurassic World and Indiana Jones: Raiders of the Lost Arc.

Generally, the bird calls are recognized as “fight songs.” They are nasal and guttural clucks, and their comical sounds sometimes resemble humans. The calls can also consist of hissing and screaming.

The willow ptarmigans are typically found in a tundra habitat. They have the ability to adapt to their surroundings, and that’s how they survive. Currently, this arctic grouse species is around 40,000,000 in number.

And the good news is, this bird breed is not in any danger of getting extinct. They are protected by the law, and the residents in Alaska do like their state bird and help them thrive.

“Lagopus” is the genus name of the willow ptarmigan. And in Greek, it translates to “hare-footed,” which alludes to the feathered feet of this grouse.

America’s Last Frontier is a chilly haven for humans and birds. But despite the cold days and nights, the willow ptarmigans find ways to survive. They have feathered feet, adaptable plumage and diet, and strong family values.

Now that your question is answered regarding what is the state bird of Alaska, kindly share this post. We love to know what you think as well. Feel free to leave us a comment.