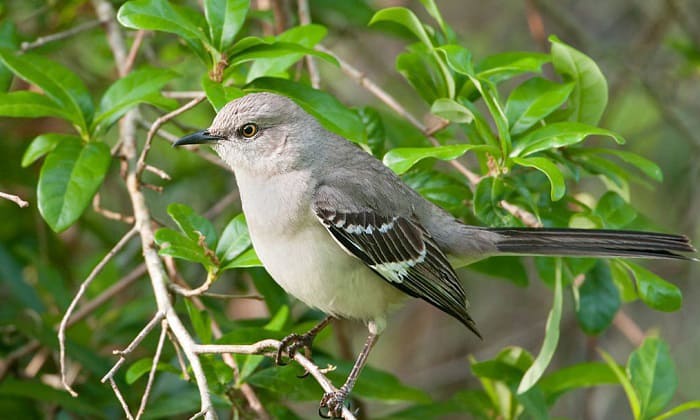 If you look up what is the state bird of Arkansas, you’ll find the Northern Mockingbird. This creature is an amazing songbird that is capable of copying the songs of other avians, mimicking dog sounds, sirens, and pianos.

It loves to stay in open settings, and perches on rooftops, power lines, and high structures.

The Northern mockingbirds are found in the US, Mexico, and Canada, and are also the avian symbol of Florida, Texas, Mississippi, and Tennessee. Learn more about them below.

All About the Arkansas State Bird Northern Mockingbird 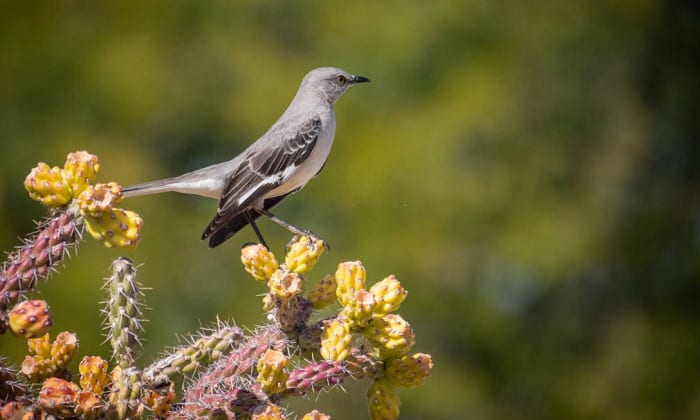 Governor Harvey Parnell declared the Northern mockingbird as the state bird on March 5, 1929. At first, the proposal to make this bird species as the state symbol was not taken seriously. But in light of this bird’s importance to farmers, eventually the bill was passed.

To this day, you can find beautiful hiking trails where the Arkansas state bird and flower are always present. Indeed, the Apple Blossom makes the state more picturesque.

The medium-sized male and female Northern mockingbirds are similar in appearance, although the males are a bit bigger. They are the perfect symbols of the state. The birds have lengthy tails and legs, gray upper torsos, black bills, yellow or pale green-yellow iris, and white patches on their wings.

The Northern mockingbirds are extremely fond of insects and weed seeds. This kind of diet makes this passerine species popular with farmers and homeowners with gardens.

The birds get rid of the bugs, and they munch on weed seeds that can suck up all the nutrients intended for the plants.

However, before the fall season ends, the gray-brown songbirds shift to veggies and fruits. This is mostly because of the scarcity of their favorite food during the winter months.

When fall comes, the male and female Arkansas mockingbird exercise their vocal skills in order to claim their feeding spot. And when spring comes, this avian species gets ready to find another location for breeding.

The breeding ground of the AR state bird is typically 20 acres for every mating pair. Male and female Northern mockingbirds mate during the spring and summer. They breed 2-4 times annually, and the males are very protective of their family.

Male mockingbirds lay down the foundation of multiple nests in trees and shrubberies, with a 3-10 feet distance from the earth. The nests are crafted using dead twigs, leaves, grasses, trash, and rootlets.

While the young birds in the first nest are cared for by the males, the females begin laying eggs on another nest. The male songbirds feed their family while they defend their territories from any predator animal, and even from humans.

Facts About the Northern Mockingbird

The Northern mockingbird doesn’t migrate much. This passerine species is an omnivore, and their intelligence is notable. Let’s explore important Arkansas state bird facts.

The scientific classification of the Northern mockingbird is as follows:

Like humans, the Northern mockingbirds are not always lucky in finding a partner. The male birds with no mates are known to sing all day and night throughout the breeding season.

But when males and females find each other, they tend to breed together for many seasons. But there are also males that mate with multiple females at the same time.

The Northern mockingbirds are capable of singing 200 songs. The male passerines sing more often and louder compared to the females.

When left in the wild, the Northern mockingbirds can survive for eight years. They fend for themselves, foraging for insects and plants on their own or as a group. But when they live as pet birds, this bird species can last up to two decades.

The state flower of Arkansas, the Apple Blossom, and the Northern mockingbird, are showcased in the state’s postage stamp. Both state representations look absolutely amazing together.

The Northern mockingbirds are not naturally social. They are often alone or with their mates, and this bird species is antagonistic not only during the breeding season, but all-year round. Females fight with other females, and the same goes with males.

As intelligent feathered creatures, the Northern mockingbirds are known to remember the humans who threatened their territories. This capability also allows them to identify previous breeding spots that are good for mating.

There are four popular calls of the Northern mockingbirds that are easily recognized by birders. The calls are labeled as the hew call, chatburst or chat, begging call, and nest relief call. The last two are vocalized by the male passerines only.

The Northern mockingbird has been an inspiration to songwriters, novelists, and filmmakers. Here are the artistic works this species inspired:

You now know what is the state bird of Arkansas. This songbird is indeed popular, and residents are always blessed with the sight of this avian at high structures.