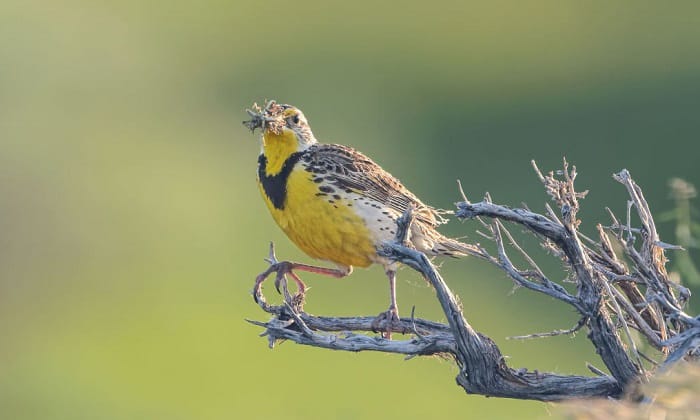 The Western meadowlark is the state avian of Oregon, North Dakota, Nebraska, Wyoming, and Montana. But what is the state bird of Kansas? It’s actually the same bird.

Interesting Information About the Western Meadowlark

The Jayhawk State chose the Wild Native Sunflower as its state flower. And though the Western meadowlarks prefer insects and bugs for their meals, they also like to munch on sunflower seeds. The state flower and bird are connected in the cycle of life, both representing the state of Kansas.

This bird breed is often seen in open spaces, and they’re not attracted to dense forests. However, in nesting, they turn to areas with enough vegetation to hide their breeding territory.

Why Is the Western Meadowlark the State Bird of Kansas

This bird is a constant sight in the state, and the sunflower field is its usual haven. Plus, the jovial yellow shade of this avian coincides with the bloom of the state flower.

More importantly, this avian species is voted for by thousands of children. This conveys the fondness of many kids towards the Western meadowlark. 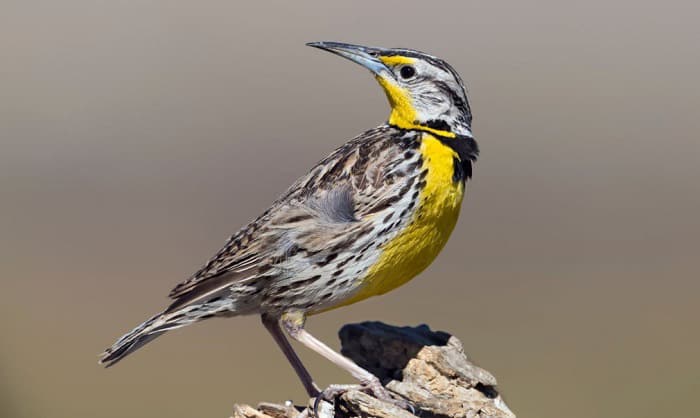 The Kansas state bird has a yellow chest with a black “V” shape on the neck. Western meadowlarks have pointy bills, hazel stripes on the head, white flanks with spots of black, a chocolate-colored tail, and dark and brown back.

The Kansas meadowlark knows how to survive in every season. They love to eat insects, but when there is a lack of their favorite meals, they turn to seeds and grains. In times of extreme food scarcity, this avian species survives by feeding on carcasses.

Western meadowlarks feed through a process referred to as “gaping”. This is using the bill to probe the ground for insects and bugs, as well as other food sources. Thanks to their lengthy bills, this avian breed has an easy time feeding itself.

This passerine is also a prey to many animal species. Their predators include coyotes, Northern harriers, white-tailed kites, red-tailed hawks, Swainson’s hawks, and falcons.

As the month of May arrives, the male birds search for the right territory to mate with the female species. Once the breeding ground is chosen, the male Western meadowlarks appeal to the females by displaying their flight and vocal prowess.

In every mating season from May to July, a male may mate with two females.

When it’s the season for birds to breed, the Western meadowlarks choose to build their nest on the ground instead of in a tree. The female songbird has the sole responsibility of digging a cup-shape nest on earth using dry grasses and shrub stems.

Once the ground nest is ready, the female Western meadowlark lays her eggs after fertilization.

Before finding their partners, the male Western meadowlarks have the ability to safeguard their breeding territory for 30 days. They drive intruders away in what is called a “pursuit flight”, or alternatively, a “jump flight”.

Facts About the Western Meadowlark

Now that you’ve learned some basics about this species, discover more Kansas state bird facts that will surely amaze you.

When the Western meadowlarks form groups, their flock is known as the “pod”. These birds don’t migrate long distances, but rather seek warmer places nearby during the winter.

The state bird of the Wheat State is a ground nester, and the nests are often seen in a soil depression. To protect the eggs, the females build a grass roof and a tunnel for them.

The Western and Eastern meadowlarks look the same, but they don’t engage in hybridization often.

Meadowlarks are one of the symbols that represent the state of Kansas, but did you know they are often mistaken for the oldfield lark?

It was Meriwether Lewis who first spotted the difference between the two breeds of birds in June 1805. The seasoned explorer found that the bill, tail, and songs of the birds were different.

Bird pet breeders found out that hybrid meadowlarks can mate and generate eggs. But in their experiments, only a few eggs were able to successfully hatch.

The state bird of Kansas city is decreasing in population. This is primarily due to the use of pesticides in farmlands and gardens. The degradation of their natural surroundings plays a role in this as well.

Sturnella neglecta is the scientific name of the Western meadowlark, which was given by John James Audubon. Sturnella means “starling-like,” and neglecta means “ignored.”

The oldest bird in this species was located in the state of Colorado. That Western meadowlark was six and a half years old. However, the life expectancy of this bird breed is 5-8 years.

Western meadowlarks love to eat insects and bugs. And this behavior makes this avian species a great helper in farms and gardens. And though these birds munch on grains, they also feed on weed seeds.

Male Western meadowlarks hunt for food for their family. Then the females feed their baby birds using a “gaping” process. The mothers use their bills to hold the food and feed them directly to the bills of their young birds.

We hope you now know what is the state bird of Kansas. If you ever visit the state, it probably won’t be hard to see the meadowlark. The black “V” neck is what makes this avian species stand out.

This medium-sized ground nesting bird prefers open fields. And its vibrant plumage complements the yellow bloom of the state flower.

If you learn something new from this post, kindly share this to your friends. And leave us a message. We love to see new ideas from our readers.