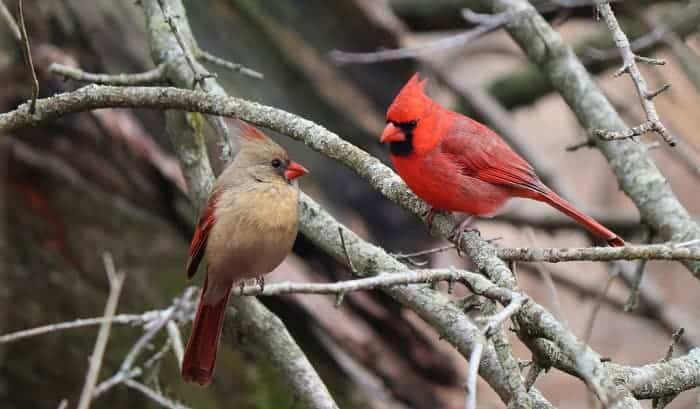 Birds are usually rich in symbolism. Cardinals are no exception. This mystical bird has been a part of mythology and symbolism since the beginning of time. It appeared in numerous folk tales all across the world. So, it’s not strange if you see it frequently and start wondering “What does it mean when you see a cardinal bird?”

The most common interpretation of a cardinal is a message from a departed loved one. Whenever you see one, it signifies that they are visiting you. They generally appear when you need or miss them the most. They also come through moments of joy and sorrow to let you know they will always be there for you. Besides, a cardinal can convey other meanings, such as love, truthfulness, and good fortune.

In the following piece, I will explain what it means to behold a cardinal. I’ll show you this wonderful creature and its spiritual significance. You’ll discover whether this mystical bird is your guardian angel. I hope you have a good time reading.

What are Cardinal Birds 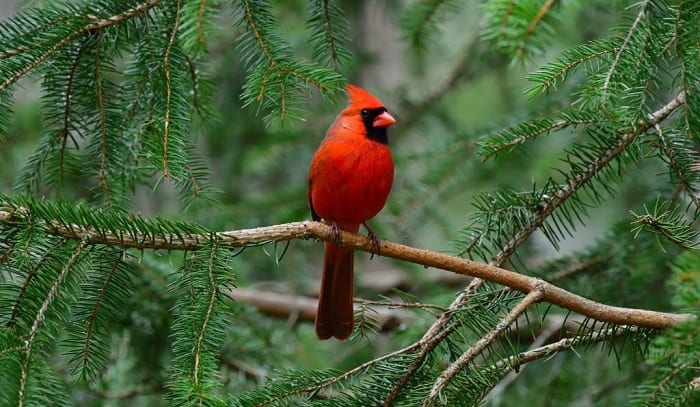 According to National Geographic, cardinals, often known as redbirds, don’t migrate and are more prevalent in warmer climates such as the United States’ southeast. However, in recent years, they have stretched their usual range northward across the US and Canada.

This population expansion might be attributed to an increased number of winter bird feeders as well as the bird’s capacity to adapt to human environments in parks and suburbs.

Even inexperienced bird watchers can identify bright red cardinals, which are frequently seen in gardens and at bird feeders. When feeding in other areas, the birds consume sap, bugs, grains, and fruits.

Spiritual indicators are all around us; we simply need to know where to look for them and how to interpret them. Angels are attempting to communicate with us in a variety of ways. One of them is birds.

As for what it means to see a cardinal, let me tell you that this lovely bird always sends great spirit signals. I’ll show you a few.

The idea that cardinals are spiritual emissaries has been around for a long time in many civilizations and communities, and it continues to persist in our current society. Where do you believe their names, such as cardinal directions, cardinal angles, and cardinal hues, originate from?

The word “cardinal” is Latin, derived from “cardo”, which means hinge or door. As a result, the bird serves as a physical portal between the spiritual world and the Earth, with the mission of sending messages between the two.

The cardinal symbolism is embellished in plenty of tales and rituals. Many of these, to mention a few, are about good health, rejuvenation, and pleasant, healthy relationships. Perhaps delving deeply into the lives of these mystical birds can show why they are bestowed upon with so many blessings.

Unlike other polygamous birds, red cardinals are monogamous, pairing for life and staying for the remainder of their lives inside a limited region that they passionately guard. Upon hatching, both parents take care of the baby birds to ensure their safety.

Seeing a cardinal can bring you hope and peace because your prayers have been heard. Also, don’t forget to appreciate the birds as the spirits are protecting you.

Visits From the Departed Souls 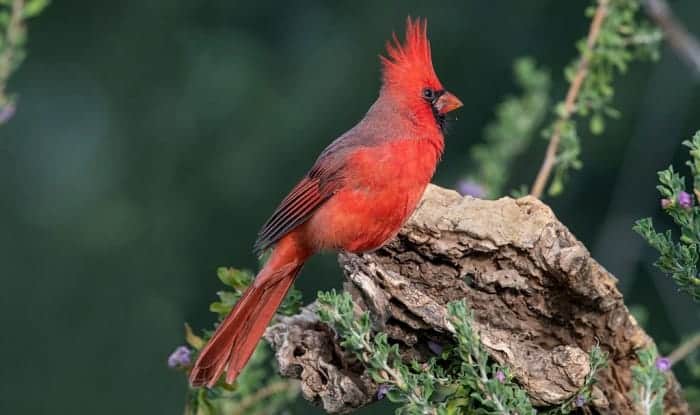 In many traditions, cardinals are seen to be messengers from the afterlife. Our beloved ones are attempting to connect with us through these lovely birds. Perhaps your long asleep grandpa wants you to know that he is still watching you with every step you take.

You should allow yourself to get absorbed in the frenzy if you notice someone trying to attract your attention, and you might be able to interpret the message that this bird is attempting to send to you. Even when you don’t interpret any messages from the sighting, you should know that your ancestors are guiding you and they are sending help.

Sincerity and Truthfulness in Love

Cardinals are passionate and loyal lovers to one another. Cardinals mate for life. Their connection with their partner is amicable, joyful, and healthy. In difficult times, both the female and male cardinals lovingly sing duets, calling similar tunes to each other.

This is also why, in native mythology, anyone who sees a cardinal may expect a love connection shortly. If a person in a serious relationship sees the red bird of marvels, they might anticipate their partnership to rekindle romance. On the other hand, the presence of cardinals reminds those who have been dishonest in their relationships of the importance of monogamy.

For Native Americans, 12 is traditionally considered a lucky number. Since a cardinal’s nest typically contains 12 eggs, they associated the number 12 with them. Aside from that, cardinals are year-around birds, which means you may see them at any time of the year.

The meaning of cardinal is strongly associated with good fortune, so if you come across one, it is believed to bring good luck during the following 12 hours, 12 days, or at 12 AM or 12 PM.

What Does It Mean When You See 2 Cardinals

Cardinals are powerful messengers, but do you know what it means to behold two cardinals? The sight of these beautiful birds in pairs is a strong wake-up call. They convey that you should pay greater attention to your surroundings.

You should pause for a moment and take a look at yourself. Seeing two cardinals indicates that you are not paying attention to essential matters as you have countless thoughts in your mind and are too preoccupied with daily concerns that you most likely ignore your partner and family.

Almost everything is conceivable in our fantasies, and encountering a cardinal is not an exception. Dreams release our inner selves to a realm without bounds or constraints. If you catch a glimpse of cardinals while you are asleep, it may be a sign from the gods telling you to be genuine to yourself.

The message is persuading you to abandon what you are not and you should pursue your path of happiness. It also indicates that a phase in your life is coming to an end, and it is time to prepare for the new era.

There are several theories concerning the relationship between cardinals and Christianity. This might be because the highest officials of the church are cardinals who wear vibrant red robes, which is only a coincidence.

Some think that the cardinals represent Christ’s blood, whereas others feel that they are a sign from our departed loved ones. There are also books, literature, organizations, and even websites devoted entirely to this subject. A research on the issue, however, failed to offer proof of a direct cardinal reference in God’s word.

Cardinals are magnificent creatures, regardless of whether they symbolise Jesus’s blood or our loving forefathers remembering us.

The Cardinal has been nicknamed the “Christmas Bird” for its magnificent red color. According to legend, the cardinal represents the beauty and kindness of the festive season. On a gloomy winter day, catching a sight of this bright bird gives happiness, optimism, and motivation.

Whether you believe a cardinal bird is Christmas symbolism or not, knowing and sharing tales like this allows us to not only enjoy the holiday, but also to communicate and connect.

Giving presents or adorning our houses with memories and furnishings that tell a narrative helps us bond on a deeper level during the winter. After all, isn’t this what the holidays are all about?

If you are enthusiastic about these red cardinals just like I am, here are some interesting facts about these lovely and meaningful birds.

The male cardinal is easily distinguished by its bright red hue, whilst the female cardinal possesses tan feathers with a crimson wash over the chest. The red wash characteristic, on the other hand, differs across females.

According to Pennsylvania State University, on average, northern cardinals may live in the wild for at least three years. Some of them, however, can live for 13 to 15 years. The lifespan record for a northern cardinal is 14 years, which may come as a surprise to you.

If you love cardinal birds and want to hear their funny chirp, check this video by GoTrails. There’s no doubt that cardinal birds can bring peacefulness to your soul!

Cardinal birds are amazing creatures. They convey a lot of meanings, such as peace, hope, devotion, protection and romance. The cardinal bird is not just a symbolism of spirits, it is also a blessing to humans. Whenever you come across this lovely species, be attentive and thankful for its presence.

I hope you find this post interesting. You now understand what does it mean when you see a cardinal bird. If you know any other interesting facts and myths about these redbirds, leave a comment. I’ll be happy to share with you.

Before you go, don’t forget to check out other of our articles related to birds’ means: