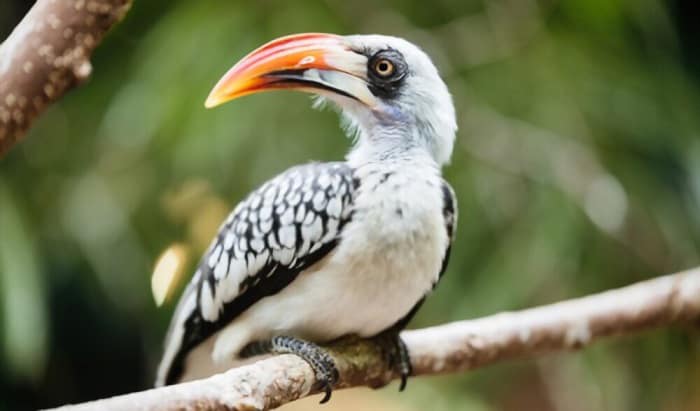 The Lion King film was a huge hit for families worldwide. And one of the major characters that touched people’s hearts is the king’s knowledgeable and stern majordomo, Zazu. But what kind of bird is Zazu from The Lion King?

Zazu is an African red-billed hornbill that is instrumental in keeping the Pride Lands safe. This bird species originated from Africa, and they’re omnivorous. Their red bills are curved, making them absolutely distinguishable among other avian breeds. 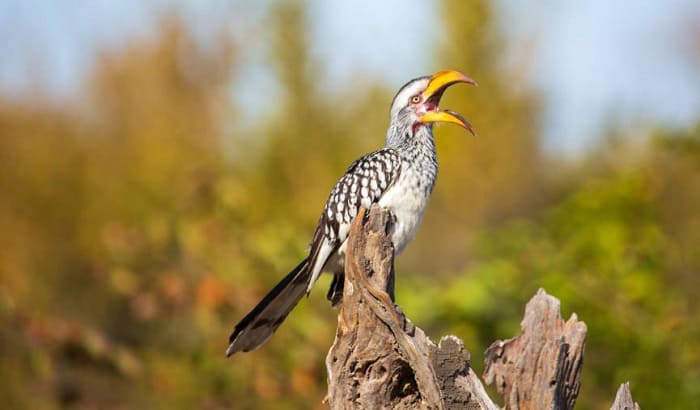 There are 55 hornbill species in the world, and the African red-billed hornbill is one of them. Zazu bird is part of this family, and his downward inclined bill is used to forage food on the ground. In general, hornbills have powerful bills thanks to the fusion of two vertebrae located on the neck.

Zazu is no doubt a popular character in the Lion King film. This makes people wonder about the real African red-billed hornbill. Good news is, there are fascinating facts about this bird species.

It was in 1994 when the first Disney movie, The Lion King, came out and wowed the world. In this film, the iconic Zazu has an orange and lemon-colored bill, a white trunk, and a blue-grey plumage. Plus, their short wings can take them into the sky.

However, in the 2019 The Lion King movie, Disney finally got the right color for the African hornbill. Zazu here is featured with a red bill, white torso, amber eyes, and feathers of black and white.

The African red-billed hornbills are omnivorous. They like eating fruits, nuts, berries, insects, lizards, snakes, and other small animals and plants. In order to ingest food, Zazu and the rest of his species yanks their heads backward. And with an open bill, they shove their chosen food into their esophagus.

As hornbills are predators themselves, they also have beasts of prey that favor them as meals. These predators include adders and raptors, as well as bigger animals.

Fact #4: What’s behind the name

All 55 hornbill species, including African red billed hornbill, have the same down-curved red bill. Back in the day, human ancestors associated the cattle horns with the shape of the hornbill’s beak. And so the name hornbill is used to address them. As for the African red-billed hornbill breed, they originated from Africa, and their beaks are red.

The African red-billed hornbills are monogamous, and they have one mate for life. In one brood, there are up to half a dozen eggs. The females create a closed chamber for her eggs in tree holes. They allow only a tiny opening to receive food from the males.

Once the eggs are hatched, and the baby birds start growing, the females create a bigger closed nest. For six months, the female hornbills rebuild their nests to accommodate the growing family. But at all times, there will only be a super small opening for the food to enter.

Also, while inside the nest, the female African red-billed hornbill sheds its feathers. But once the nesting period is done, their plumage goes back to its former glory.

There are not many birds name in Lion King, but the loyal Zazu is hard to forget. Though no flocks are presented in the film, the African red-billed hornbills form flocks, but they’re mostly found in pairs. And they communicate by making clicking sounds.

These bird species are territorial, and that behavior applies to the same breed. But, they don’t go against other species of hornbills. Additionally, red-billed hornbills search for food together with dwarf mongooses. They tend to call warnings to each other when predators are at bay.

The bird from Lion King is an African red-billed hornbill, and both males and females in the same species look alike. However, the beaks of the females are smaller compared to the males. As for their body, they’re 19-24 inches long, and their weight is 0.50 kilograms.

This bird breed is smaller than other hornbill species, but they’re not the smallest.

What type of bird is Zazu? He is actually an African red-billed hornbill. This bird species is important for ecological reasons. They feed on insects the most, though, of course, they like plants.

Hornbills consume a large number of insects, and so farmers and gardeners love them. They take out the insects that are pests to plants. So these birds are highly regarded by people who benefit from the dwindling population of insects.

The African red-billed hornbill answers the question as to what kind of bird is Zazu from The Lion King. This avian species is highly recognizable thanks to its curved red bill. Though their wings are not long, they still have the capability to be in flight.

Though ground-dwellers in nature, the African red-billed hornbills build their nests in tree cavities. And the lifespan of this avian breed is up to 15 years.

We hope you enjoyed reading this post. Kindly share with your friends, and let us know what you think. We always welcome comments and new ideas.