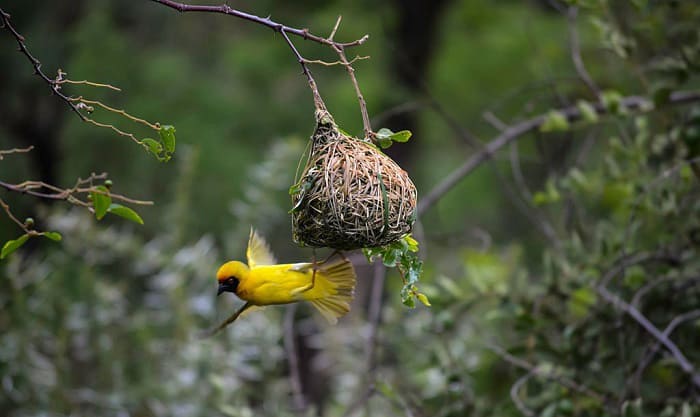 All birds go through different phases, including nesting and flying off the nest. But when do baby birds leave the nest?

Typically, it takes 12-21 days for the juveniles to fly on their own and take care of themselves. There are also avian breeds where the young birds leave their parent’s sides after a couple more weeks or even a few months. The time frame gets shorter for smaller birds and longer for bigger species.

However, even when juvenile birds are ready to leave, their body structure is still not fully developed.

When Do Birds Leave The Nests

From eggs to hatchlings, nestlings to fledglings, how long do baby birds stay with their mother? Let’s explore these bird species and see when their young avians leave their nests. 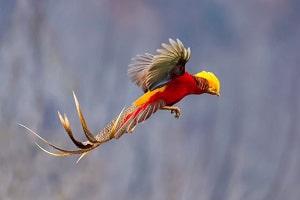 The vibrant and colorful feathers of the golden pheasants makes them distinguishable. They originate from China, and birds fledging don’t have fully grown red, yellow, black, and orange plumage and body yet.

The precocial chicks may share a nest with up to 12 siblings.

At 21 days old, the young golden pheasants can fly at 150 feet. And when they reach their 8th week of existence, they can fly like adults. Typically, this bird species has baby birds that leave the nests 8-10 weeks after hatching.

Blue jays have a habit of feeding on eggs and chicks of other avians. Males and females incubate their blue eggs for 16-18 days. And 17-21 days later after hatching, you’ll see a baby bird leaving its nest. Growing up, the young avians eat insects and nuts. 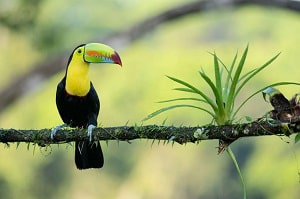 The females normally have up to four eggs, and the males play an active role in caring for the eggs and baby birds. It takes 15-20 days for the incubation period to be complete, but how long does it take for birds to fly?

As baby avians, the keel-billed toucans are completely helpless for three weeks after hatching. But after 8-9 weeks, their bodies, bills, and feathers are developed and they leave the nest.

The migratory American robins spend the winter in the Pacific Coast and Mexico. They’re known to be the most populous songbird species in North America. As diurnal creatures, robins stay together in groups at night.

During the breeding season, the American robins mate and have up to three broods. Each brood has 3-5 blueish eggs, with an incubation period of two weeks. And after the next 14 days, the juvenile robins leave the nest. 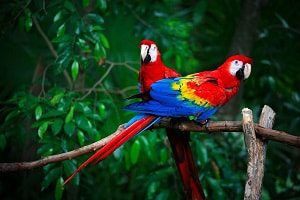 The scarlet macaws are large parrots with a gorgeous plumage color combination of blue, yellow, and red. Like other bird species, they are territorial and aggressive during the breeding season. Both sexes are monogamous, and they build their nests in tree cavities.

The females lay up to three eggs, and the incubation process takes place for around 35 days. After approximately 3 months, each young bird kicked out of nest starts to see the world. But it actually takes 12 months for the juveniles to separate from their parents.

There are more than 60 species of eagles in the world, and they are all powerful and strong. They’re monogamous avians that reuse their nests each year. Eagles start to participate in the breeding season in their 4th year of existence.

Each brood consists of up to three eggs, with the incubation time taking 35 days. Both the male and female take turns sitting on the eggs until they hatch. And after three months, the juvenile eagles leave the comfort of their nest. 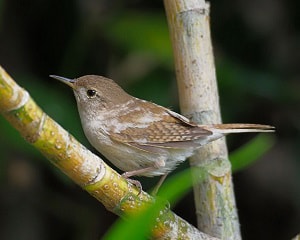 House wrens are common birds found in residences, abandoned buildings, farms, and other structures built by humans. They prefer to use woodpecker’s holes for their nests, especially in a spot where predators can be seen.

Female wrens normally lay up to ten eggs, which they incubate for around 16 days. And then the baby wrens leave the nest after 15-17 days. Once the nesting period is over, the parent wrens part ways, and they choose another mate in the next breeding season.

The flame-colored flamingos are popular for their stance. They can stand with only one leg, though no legit reason was found. Flamingos are serial monogamists. And when their eggs are hatched, the chicks are fed by both parents with crop milk.

Baby flamingos have crimson-gray feathers, and as they grow older, their plumage transitions to pale pink to vivid red. Their particular shade is a result of the beta-carotene from their food intake. And as to how long until birds leave nest, the answer is 7-12 days. 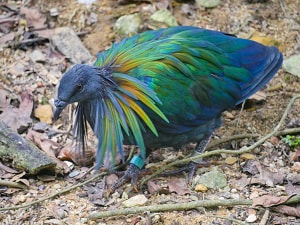 The Nicobar pigeons are island dwellers that are hunted for their popular gizzard stone. They are also captured to be eaten. As nomadic creatures, this bird species travels to islands to breed.

Female birds lay one egg only, and both parents incubate it. In a year, there are two broods. For this avian species, the baby birds disappeared from nest after 30 days, and they feed on insects, hard seeds, corn, and fruits.

Wood ducks are also known as Carolina ducks, and they are beautiful waterfowls. These perching ducks are multi-colored, and they usually breed in wooded and shallow bodies of water.

There are usually two broods in one breeding season, with 7-15 eggs in each mating period. The incubation time is around 30 days.

After hatching (within 1 to 4 days), a baby bird leaving nest is a natural occurrence. The precocial chicks climb out of the nest and fall to the ground or swim on the water. 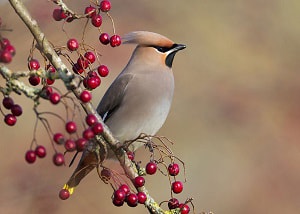 Bohemian waxwings are monogamous creatures. But unlike other bird breeds, they’re not extremely territorial during the breeding season. They start their journey back to the north after migration in February, but mostly start mating in April.

The female Bohemian waxwings lay between 3 and 7 eggs that are incubated for two weeks. After hatching, both parents feed their altricial baby birds. The fledglings leave the nest in 14-16 days and search for their favorite food.

This bird species favors fruits the most, particularly the rowan berries.

The Atlantic puffins or common puffins are seabirds that love swimming on water to feed on small fishes. They spend winter in the northern seas and fly back to the coastal regions when the breeding season begins.

This beautiful bird species builds their nests on the earth, and each brood has only one egg. Baby Atlantic puffins are fed with small fishes. And in just six weeks, a young bird flying out of nest is typical. 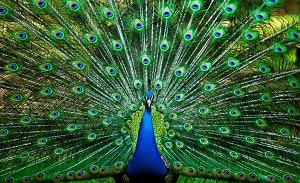 Male peafowls are called peacocks, and females are peahens. But of course, this bird species is commonly referred to as simply peafowls. Peafowls in general have a head crest and magnificent feathers. Though peafowls typically perch in trees, they start a family on the ground.

Peafowls are polygamous in nature, and peahens lay 5-9 eggs. The peachicks typically stay in their nests for 4-6 months.

Eastern bluebirds are popular for their vivid blue shade. During the breeding season, they reuse abandoned woodpecker holes to become their home.

Females construct their nests on their own, and they lay 2-7 eggs. The incubation process takes 11-19 days, and the baby birds leave their nests after 16-21 days.

Scarlet tanagers spend the breeding season in alpine woodlands, where the females select their nesting location around 50 feet high from the ground.

Usually, 3-5 eggs are laid and incubated for up to 2 weeks. And after 5-15 days, the chicks are ready to go out of the nest and into the world.

Yellow-breasted chats prefer to create their nests in dense bushes. Their nests are located at least 8 feet from the earth, in order to safeguard their 3-6 eggs after being laid.

The incubation period will last up to 12 days, and the juveniles fly out on their own after 7-10 days.

Killdeers build their nests on the ground, where they generate 4-6 eggs for 1-3 broods every year. The incubation time is 22-28 days, and bird flying out of nest usually happens one day after hatching. But their parents continue to care for the juveniles for 10 days outside the nest.

The beautifully red-colored songbirds, northern cardinals, usually spend around 9 days to create a new home. Females are the primary builders, but males bring in the materials. In one nesting period, the females lay 2-5 eggs that are incubated for about 13 days.

After hatching, the baby birds fly out of the nest at their 7th to 13th day of existence.

When breeding, house sparrows produce 1-8 eggs that need incubation for 10-14 days. The baby birds develop their bodies for 15-17 days before they leave their parent’s care. And once the juveniles are out for the nests, the parents repeat the nesting process 2-3 more times more.

The small-sized black-capped chickadees dig holes on trees for their nest, but finding the location and building is the job of the females. They then lay 1-13 eggs, and incubate them for almost 2 weeks. Males and females also take care of their baby birds for 12-16 days before they go see the world.

The answer to the question when do baby birds leave the nest varies per species. Some juvenile birds fly away after a week, others after weeks of nesting, and many stay for months before leaving. While in the nests, baby birds are fed and defended by their parents.

Through this post, you learned about certain bird species and the time frame of their leaving the nests. We hope you’ll take the time to share this to your friends. And if you have any suggestions, please leave a message.

Furthermore, you also can refer more to other topics about bird behavior: