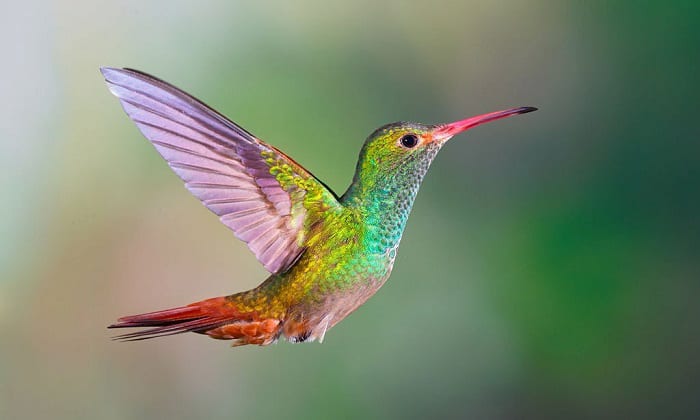 In a world of flying creatures, there are approximately ten thousand avian species that exist. They differ in size, plumage, attributes, and songs. But which birds can fly backwards?

The only answer is the hummingbirds. They’re the smallest avian species on the planet, and they can flap their wings to move forward, sideways, upside down, and backwards. And this is all thanks to their unique muscle wing structure.

All About the Only Bird Species That Can Fly Rearwards 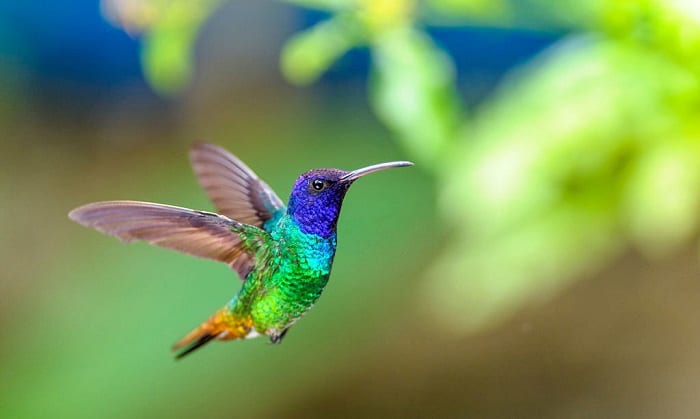 Hummingbirds have a flight speed of 15 to 22 miles per second. They can fly in all directions, which makes these passerines unique. And regardless of if their plumage is wet or not, they are capable of being in flight.

Hummingbird flying backwards is simply beautiful to watch. They can appear to hover in the air, and their humming sound is fascinating to hear. Let’s dive in and explore important information about this avian species.

The hummingbirds are blessed with a rotator cuff that allows them to fly backwards and upside down. They have the capability to flap their wings in a figure-eight movement. In fact, the wing structure of this bird species makes their weight distribution better.

Interestingly, the birds that can fly backwards can move their wings up to 200 times every second to impress the female birds, with an average of 53 beats/second for North American hummingbirds.

The enthralling thing is, the hummingbirds can seamlessly shift directions without breaking their poise.

As this bird flying backwards performs its motion, the hummingbird’s heart rate accelerates to 1,260 beats every 60 seconds.

The smallest passerines on earth are not monogamous.

During nesting period, the males do not offer any help in nest building nor in caring for the chicks. The full responsibility during breeding season falls on the female hummingbirds alone.

Hummingbirds are the only bird that can fly backwards. But when it comes to walking, these birds have weak legs and so they are not able to hop as well.

They are able to walk very short distances, but mostly this bird species use their wings to get to various locations and feed.

The normal lifespan of the hummingbirds is between three to five years. However, there was a female broad-tailed hummingbird that lived up to twelve years.

There were also other hummingbirds that lasted for around eleven years, especially with excellent food sources. But typically, hummingbirds live up to five years only.

As nectarivores, hummingbirds are great pollinators. In fact, this small avian species pays a call to a thousand to two thousand flowers in just one day.

That’s why many bird lovers offer nectar water solutions on their feeders in order to attract the super cute hummingbirds.

The aerodynamic design of the hummingbird’s physique allows them to stay in the air for a long time. They have strong muscles, even if they are small creatures.

Let’s look at the most frequently asked questions about the hummingbirds.

1. Can hummingbirds fly when wet?

Hummingbirds do not really care if their feathers are wet or if it’s raining. These small passerine creatures are capable of flying in all directions at 80 mph every one second, even with a wet plumage.

Indeed, hummingbirds are water resistant, and they actually enjoy showering in the light rain.

2. When do hummingbirds learn how to fly backwards?

Two weeks after hatching, the young hummingbirds begin moving their wings. And a week or two after, they are ready to engage in what is called fledgling.

They leave the comforts of their nests and start flying backwards, forward, and essentially in all directions. And in just two months, hummingbirds can survive on their own without assistance.

3. How does flying backwards benefit the hummingbirds?

Flying backwards is greatly beneficial for the hummingbirds, especially when they suck on flower nectar. Specifically, this allows them to take their bills away from the flower.

This flying capability makes it easier for the small passerines to feed fast from thousands of flowers in a day.

4. Why do hummingbirds fly rearwards?

The main reason why hummingbirds fly hindwards is because they can. Their wings are structured that way, and they are born with that ability.

There are more than 360 species of hummingbirds. Though there are diversities for each species, these passerines love flower nectar and they can all engage in backward flying.

Now that you know which birds can fly backwards, we hope you’ll share this post. If you have anything to add, kindly share your thoughts with us.