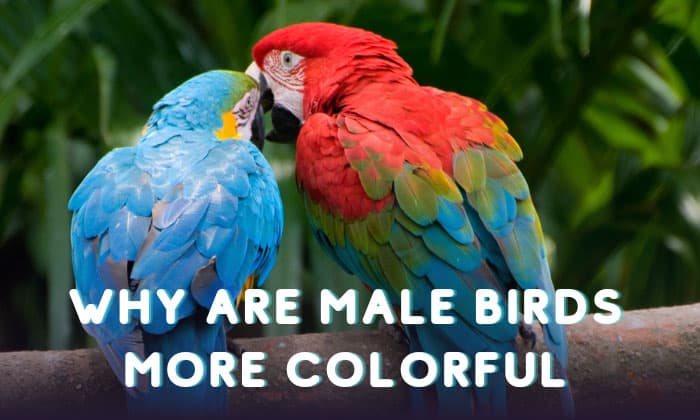 Some birds have bright colors, while others don’t. When you see a brightly colored bird flying around, though, chances are you are seeing a male rather than a female.

But why are male birds more colorful? Primarily, they use their flashy colors to attract mates and stand up against rivals.

On the flip side, females tend to have duller colors because it keeps them safe, mainly when they are nesting and more sedentary. 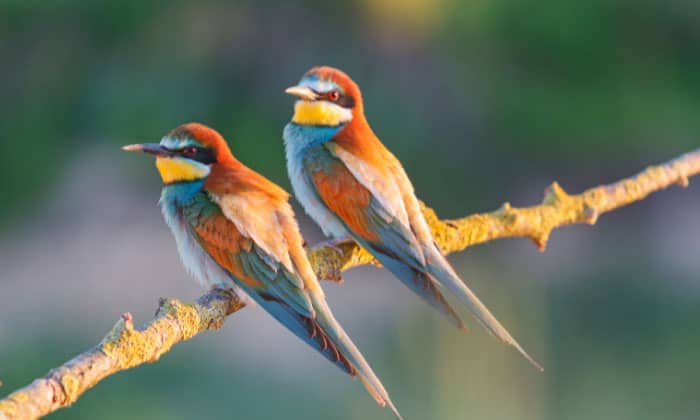 Charles Darwin’s Theory of Natural Selection states that, above all, nature is concerned with survival. Therefore, over decades and centuries, all species evolve to develop physical attributes that increase their chances of staying alive.

However, how can a species survive if it does not reproduce?

And most scientists agree that this is the category colorful male birds fall into. Though bright colors catch the eyes of predators more, they also function as sexual feathers that catch females’ eyes.

Male birds of paradise, in particular, have been dubbed the “Beauty Kings” because of their highly colorful, showy feathers.

So without any further ado, here are three specific reasons why male birds are more colorful:

Bright colors catch attention, particularly for birds who can see more colors than humans can!

At its core, male birds with pretty feathers and male birds with colorful tails are looking to attract mates. Though it makes them more vulnerable, it doesn’t seem to be a huge deal. After all, colorful males are maintained despite predation.

Colorful feathers are merely one weapon in their arsenal: males typically have courtship songs and dances that they must perform.

This is because, in several species, there is an abundance of males who need to compete over a single female. Those are some high stakes to developing a same species relationship!

Bright, preened feathers mean a bird is strong and healthy, an essential concern for females looking to breed. All mothers want only the best genes for their children!

Males don’t only compete with each other for females: they are also highly territorial. Therefore, colorful feathers are a bird’s visual signal to others that the territory is already occupied.

Essentially, this goes back to a male’s quest for a mate: having already secured suitable “property” with access to resources is a big bonus point when wooing a female!

Are all male birds more colorful?

Male birds who live in colder regions are typically less colorful also. While bright blues and reds are needed to be seen against the green foliage of a jungle, duller hues are eye-catching enough against the white of snow.

Why do female birds have duller colors?

Most female birds less colorful since they are usually the ones who sit in their nests to hatch their eggs and care for their young.

Females and others look more camouflaged to decrease their chances of being seen by predators. This is extremely important since it will be challenging to flee if spotted while nesting or feeding.

It is not only females who have duller colors. All newly hatched chicks, regardless of gender, come out of their eggs with the same drab color.

Their bright colors only emerge later when they are bigger and more capable of defending themselves.

When it comes to male birds vs. female birds in terms of eye-catching feathers, sometimes the female bird with colorful plumage emerges triumphant.

Here are some species where the female bird is prettier than the male:

Other species, such as male and female blue jays, have almost identical bright feathers.

Meanwhile, the female Baltimore oriole attracts attention since its color changes each time it molts. As the female of this species ages, its color becomes more distinct until it is as bright as the males.

Why are male birds more colorful? Because they have evolved to answer nature’s urging to breed and are constantly looking to attract female mates.

They have also succeeded in attracting us as well. Humans are simply enamored by their colorful plumage, as evidenced by the thousands of bird photos available everywhere.

Still, it must be said that just because females tend to have duller feathers doesn’t mean their job is any less critical: Staying home to care for the eggs and hatchlings is just as crucial to the species’ survival, if not more so!