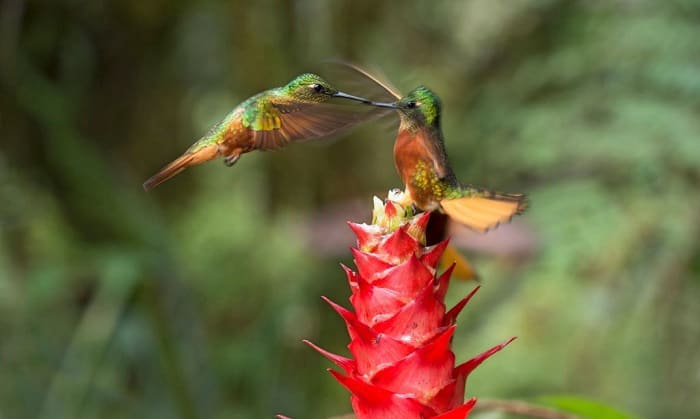 It’s impossible not to be mesmerized and entertained by hummingbirds. Many people look forward to seeing them each year in their own backyard. If you have a beautiful flower bed or bird feeders all over your yard, watching the birds’ flight routines is a fantastic way to spend leisure time outdoors. Observing these hummingbirds, on the other hand, could raise some intriguing concerns about the hummingbird behaviors.

In this article, we will seek the answer to “Why do hummingbirds chase each other?” by looking at hummingbird behavior and their flying patterns. Depending on circumstances, hummingbirds could be having a good time chasing each other, squabbling over territory or showcasing their abilities to a female bird. 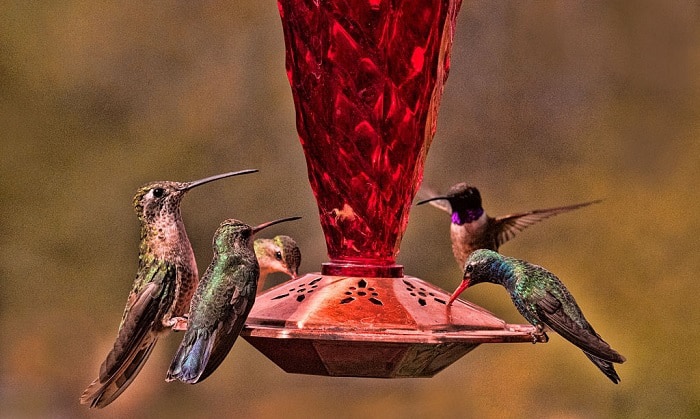 Once your eyes have adapted to the hummingbirds’ movements, you can easily distinguish between playful naughty chase and defensive behavior. The time of year will determine the specific behavior of hummingbirds. For instance, a cuddly dance heralds the beginning of courtship and mating season. The courtship habits of hummingbirds are a fascinating sight to behold. However, hummingbirds chasing each other and mating playfully are sometimes misconstrued as battling.

The courting of a hummingbird commences with the allure of plentiful food supplies and a majestic stallion displaying his power and resilience. Male hummingbirds perform mating dances in their territory to prove themselves and to signal to female hummingbirds that breeding season has arrived and they are ready. Male hummingbirds try to impress females by puffing out their chest and throat to show off their brilliant plumage.

They also deliberately hovered under the sun to proudly show off their fur. Male hummingbirds usually flirt in two ways, either the dive display or shuttle display.

While performing a dive to attract female hummingbirds, the male hummingbird will fly to a height of 60 to 130 feet, after which it will turn its head and plummet to the ground, eventually turning rapidly and creating sounds similar to honking. This ritual dance is repeated about 3 or 4 times after that.

Previously, many studies suggested that this honking was made by the hummingbird’s tail feathers. However, recently experts have discovered that it is the hummingbird’s vocal. This act of the male hummingbird not only attracts the female bird it is pursuing, but also catches the attention of other female birds in the area. While this may seem dangerous, it is considered an important step in the hummingbird’s mate selection process. 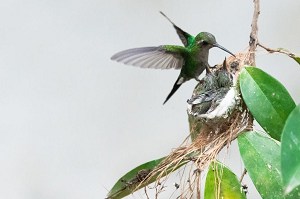 At the same time, the male bird will make a whistling sound with his tail feathers while swaying his body. If the female bird feels in tune, she can join in the dance. Then, if the female is strongly impressed, she will perch on a nearby perch and spread her tail. This means the female has signaled the green light and is ready to mate.

The mating process usually lasts about 4 to 5 seconds, after which each bird goes its separate ways. The female hummingbird will shoulder the responsibilities of a mother, building the nest and raising her chicks without the help of the male while the male can pursue his next goal.

Hummingbirds often establish territories based on an abundance of food and water resources, as well as nesting materials.

Male hummingbirds tend to take a quarter of an acre of land as their territory and they will repel any male birds that encroach on their territory. After choosing a territory, they will try to protect it and encourage the female bird to stay with it by showing affection. Therefore, an inexperienced hummingbird observer will easily confuse hummingbird courtship and defense.

On the other hand, females also define territories in their own way by building nests. For the sake of the cubs, it is essential to establish a territory where there is an abundant source of food and water.

Hummingbirds rarely attack humans, so you don’t have to worry if you’re not a hunter in their area. They may hover around out of curiosity or to see if something is out of the ordinary. If hummingbirds are truly threatened by humans, they will quickly fly away to avoid danger. 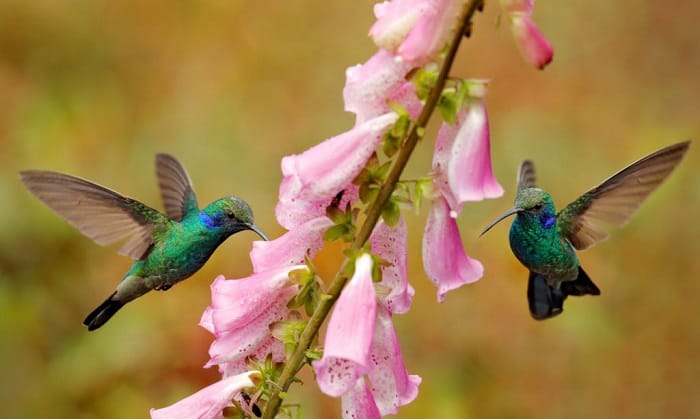 To show dominance or aggression, hummingbirds fight while chasing each other. Hummingbird aggression is alerted by voice or body.

Most of the time, the initial step or indicator of hostility is displayed by loud warning noises used to frighten any invader or unwelcome hummingbird enemy approaching their area. The sound will vary based on the bird, but there will be a high, fast-paced tweeting or chittering.

If this move does not discourage the invader, the magnitude of the noises and warnings will grow, finally leading to a violent fight. These sudden and extreme actions demonstrate their sincerity and resolve to chase their opponent away.

Hummingbirds will alter their stance to frighten invaders in addition to making warning noises. A male hummingbird would actively expand and stretch its tail and wing when perched to seem bigger and more threatening to his enemies. Male will flaunt its brilliant colors by flaring the gorget and neck feathers. It will point the beak towards the opponent to prove that it is willing to protect its area at any cost. The menacing stances of increasing in size and exhibiting energy strengthen its intimidating look.

When warnings and flaring postures fail to achieve the desired result, the chase follows. The dominant hummingbird in the region may encounter and attack an outsider who is eating from bird feeders or nectar-producing plants in its defined territory. It will vehemently scare away the uninvited guests, accompanied by furious chirps, until the visitor is far away to pose no threat.

When all of the previous actions fail, physical combat becomes their final resort. This conduct happens when a persistent opponent rejects the suggestion to go and returns to ridicule their rival in the intention of becoming the more dominating masculine presence in the region.

A common sight is an invader who, after being driven away, completes a full circuit and returns. To store energy, the defensive hummingbird will calmly hang in mid-air to wait for the invader to come back. Rather than the invader fleeing, both sides will stand firm to frighten each other and acquire territorial advantage.

Pointy beaks and talon claws are weapons in the battle. The less powerful hummingbird will generally surrender and leave the area at this time. If this does not happen, violent physical combat ensues, with their bodies slamming against one other while in flight. The noise is comparable to that of a deck of playing cards being shuffled. This excessive aggressiveness is highly hazardous and can result in serious damage or hummingbirds kill each other. The more powerful hummingbird will be the victor!

If the battling bothers you while you’re observing your hummingbird, there are a few things you can do to ease the situation. It’s common for hummingbirds to fight for territories and resources. Keep your eyes peeled for a rogue bird. A ferocious hummingbird may be attempting to take control over your garden. It will be simpler to resolve conflicts in your own garden if you understand why they are fighting.

Set up bird feeders as widely apart as possible to discourage violent behavior. Hummingbirds that aren’t particularly aggressive will also be present. This will allow them to grab some food before the “nasty” birds arrive and scare them off. A feeder with distinct feeding containers for hummingbirds is one potential alternative.

2. The number of feeders

Increase the number of bird feeders in your garden to prevent bird fights. A single aggressive bird cannot defend a vast number of feeders. This will gain access to a variety of hummingbirds. They may take their time and peacefully eat their meal on their feeder.

​​3. The Locations of Feeders

4. The locations of perch

If you notice an irritable hummingbird in the neighborhood that is frightening everyone away, first identify its preferred perching spot. If the feeder’s solutions do not reduce territorial concerns, removing or cutting down their preferred branches will push the bully to look for a new place. Nevertheless, keep in mind that hummingbirds have their own characteristics, and eliminating their first perch may only force them to migrate with their aggressiveness to a different place.

Watching hummingbirds is a very enjoyable experience, but it is even more interesting if you can understand the meaning behind their chasing action. It could be a charming couple dance or a hummingbird’s territorial defense move. It takes a lot of experience to recognize and understand behavioral distinctions, but once you can, they are easy to spot. To reduce conflict between aggressive hummingbirds, you can try with your bird feeders or cut out the perches.

Besides, don’t forget to check more our other interesting topics of birds: