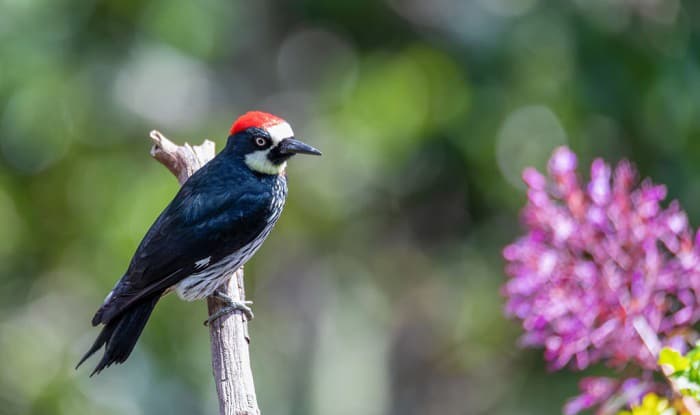 The woodpeckers in Arizona are common residents of the state’s forests. They hammer on trees to create holes and utilize their long tongues to clean up the debris. Woodpeckers also like to visit bird feeders, which greatly warms the hearts of bird enthusiasts.

What You Need to Know About Arizona Woodpeckers

Arizona is popular for their Grand Canyon, historical areas, and diverse climate. Thanks to the latter, the state is excellent for the existence of a desert woodpecker, acorn woodpecker, Red-naped sapsucker, American three-toed woodpecker, gilded woodpecker, and more woodpecker species.

There are 31 nature parks in the Grand Canyon state, plus hundreds of homes that welcome birds to their yard. And so, the species of woodpeckers residing in the state live a happy existence with plenty of food sources. 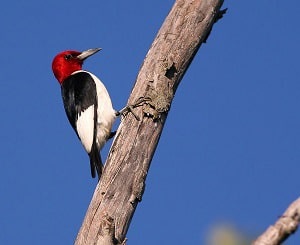 The red-headed woodpecker Arizona bird species, is rare but they can be spotted in Santa Cruz and Coconino.

Like typical woodpeckers, they have black and white shades, except that they have vividly scarlet heads. They weigh 56-91g, and have a length of 7.5-9.1”, with a wingspan of 16.5”.

Red-headed woodpeckers like open areas. And they build nests in dead trees during the spring and summer and generate 4-5 eggs. While nesting, both males and females are extremely protective of their nests, eggs, and baby birds.

Additionally, this avian breed prefers to fly and capture flying insects for food instead of drumming on trees. They also feed on plants, bird eggs, and nestlings. And mice. 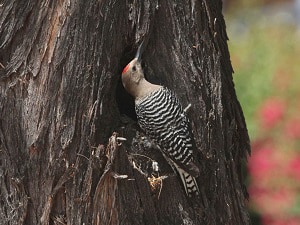 A gila woodpecker is a common sight in Arizona, regardless of the season. This species has a black and white line on its plumage, brown head, and crimson crest for the males.

The Gila woodpecker’s diet consists of insects, berries, earthworms, and invertebrates. And when they visit yard feeders, they love to munch on suet, nuts, fruits, and corn. Additionally, this avian breed likes to perch and nest on a saguaro cactus. They certainly have no problem surviving in a treeless environment. 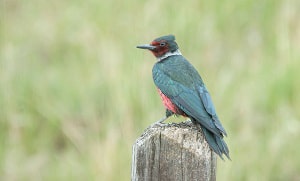 The Lewis woodpecker species is not often seen in the Grand Canyon State, but they’re always around. They are different in many ways from the other woodpeckers, particularly with a dark scarlet face, rosy belly, black back, and gray collar. Even their hunting habits are not the same. Most woodpeckers use their beaks to dig holes in trees or forage on the ground. But the lewis’s woodpeckers use their wings for hunting flying insects. 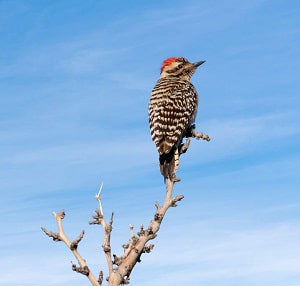 The Arizona woodpecker called a ladder-backed woodpecker is a small species at 6.3-7.1”. They normally weigh 21-48g, with a wingspan of 13”, and their ladder and checkered design are black and white. And they also have white rings pattern on their napes, which set them apart from other woodpeckers.

Both sexes can be distinguished through the red crest of the males and the black crown of the females.

Ladder-backed woodpeckers are non-migrant birds, and throughout the year, they eat insects, larvae, and cactus fruits. In feeders, they prefer peanut butter, mealworms, and black oil sunflower seeds. And during the breeding season, they nest in dead trees. 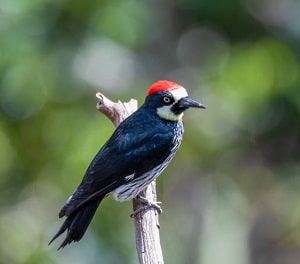 One of the types of woodpeckers in AZ is the acorn woodpecker. They’re all-year residents of this state, but birders typically spot them frequently in the months of April and October. This red-capped bird species have a buffoon appearance coupled with a black bill, white face, white and dark-spotted belly, and dark-colored backs

They collect acorns, nuts, dead bugs, insects and feed on sap, fruits, and acorn woodpecker eggs. The granary tree or the pantry of this bird species are utilized for storing their food. 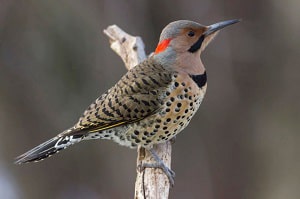 The identification of the Northern flickers is not that difficult, thanks to their distinctive red patch on their nape.

Northern flickers excavate their nests in tree cavities during the breeding period. The females produce 5-8 eggs, and feed on ants, seeds, beetles, and fruits. And as large woodpeckers, their calls and songs are loud and far-reaching.

Also, though not so fond of feeders, northern flickers love birdbaths, especially warm ones in the cold season. 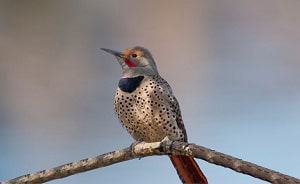 Woodpeckers in northern Arizona include the Arizona woodpeckers, and they’re native to this state. These birds differ from other woodpeckers because of their brown plumage since most of their relatives are black and white.

Males have white bellies with bars, and redhead patches, while females have a spotted pattern. Both sexes are usually 7.1-7.9” in length, 34-51g in weight, and 14.2” wingspan.

Arizona woodpeckers are social creatures that join groups with smaller birds to hunt for food when it’s not the breeding season. Their favorite foods are insects, and like the acorn woodpeckers, they like acorns too. And they love to roost and perch on oak and pine trees. 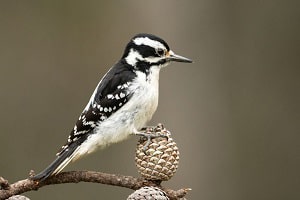 The song and call of the hairy woodpeckers are always heard in the Apache-Sitgreaves and Coconino National Forest. They have a weight of 40-95g, a length of 7.1-10.2”, and a wingspan of 13-16.1”. Their black and white plumage is complemented by a small red patch on their heads.

Hairy woodpeckers look like the downy woodpeckers, but they are bigger and have larger bills. They forage for insects, bees, millipedes, spiders, moths, and caterpillars in forests, parks, and even in human properties. When nesting, they opt for dead trees where they care for 3-6 eggs until they’re ready to hatch and leave. 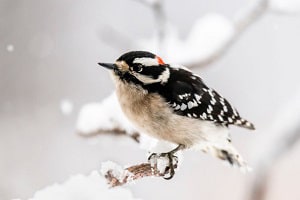 If you’re wondering are woodpeckers protected in Arizona, the answer is yes. Downy woodpeckers are safe in their favorite hangout in the Arizona national forests.

Like other woodpeckers, they have a black and white color combination, but males have scarlet mark on their heads. Both sexes typically weigh 21-28g, with a 5.5-6.7” length and wingspan of 9.8-11.8”.

Downy woodpeckers are common yard visitors of both seed and nectar feeders, and homeowners simply love them. These birds are lively, cheery, enthusiastic, and extremely social, too, even with other smaller avians. 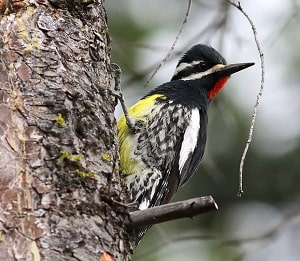 In the woodlands of Yuma, AZ, woodpecker species such as Williamson’s sapsuckers can be seen.

The males are blacker than other relatives, with perpendicular spots on the wings, golden belly, and scarlet throat. On the other hand, females have the typical black and white design, dark specks on the chest, and chocolate-colored head.

The Lewis’s woodpeckers feed on tree sap, flying insects, seeds, and fruits. They are migratory birds and come back to Arizona when it’s time for the breeding season. They nest in pine woodlands and care for their baby birds until they can make it on their own. 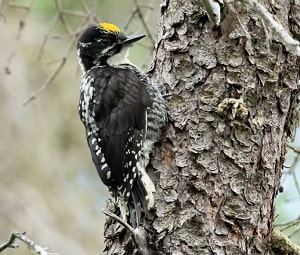 This bird breed has a black and white coloring, with a black face speckled with white. And the most distinguishable feature of the males is their vivid yellow head mark.

As solitary feathered creatures, American three-toed woodpeckers are rare birds in Arizona, but dedicated birders can always find them. They prefer to roost, breed, and nest in burnt woodlands. And their diet consists mostly of larvae. 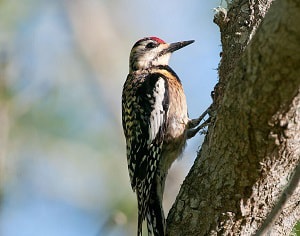 Referred to as an accidental bird breed, the yellow-bellied woodpeckers do participate in a woodpecker mating season Arizona. This avian species is small at 7.1-8.7” in length, weight of 43-55g. and wingspan of 13.4-15.8”. They have a black streaked plumage, scarlet temple, yellow bellies, and crimson throats for males.

Yellow-bellied woodpeckers are migrants, and their sturdy bill and tongue allows them to create a tree cavity for nesting. Females usually lay 5-6 white eggs, and their nests are parallel with other nesters. In search of food, they forage for food in the wild, and they also often visit feeders. But of course, their main food supply is sap. 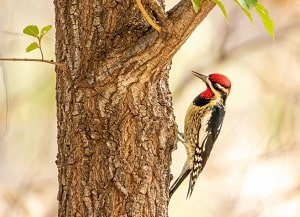 They have white gashes on their plumage, coupled with a perfect combination of a scarlet, black, and white face. And these woodpeckers feed on sap and insects. They find food by drumming their sturdy bills into trees in a slow tapping sound.

In the breeding season in spring and summer, the red-naped woodpeckers excavate their holes in tree trunks. They usually build nests in rows together with other woodpecker pairs.

However, these woodpeckers are known to kill trees due to their constant drilling to find food. 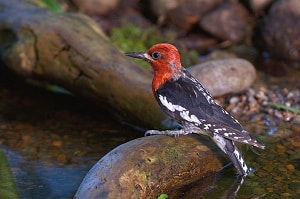 Red-breasted sapsuckers have bright red breasts and heads and streaked shoulders. The rest of their bodies are black and white, and they also have white eye specks.

This woodpecker species favors tree sap, fruits, and insects. And though they’re rare residents in Arizona, they come during the breeding season.

They nest in tree cavities, where a few pairs build nests in rows. However, red-breasted woodpeckers are not frequent visitors to human residences unless they can see conifer trees. 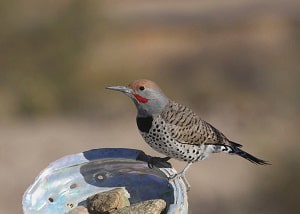 The gilded flicker weighs 1.9-2.3oz, with a length of 8.3-9.1”, and a wingspan of 16.9”. They look like the northern flickers, except for their bright yellow marks on the tails and wings.

This type of woodpecker loves the saguaro cacti, and they usually nest there. Also, gilded flickers are smaller compared to the northern flicker species.

Gilded flickers display a beautiful courtship performance during the breeding season. Males use their bills to fence with their rivals while the females watch their duel.

And then the females decide which one is the better fighter and mate with them. After the courtship process, mating and nesting begin.

Through this post, you can now easily identify all the 15 species of woodpeckers in Arizona. Though they mostly look the same, they do have differences in appearance, prey hunting, size, and nest location.

We hope you’ve got to know the woodpeckers in the Grand Canyon State well. Kindly help other birders learn about them by sharing this article on your social media.