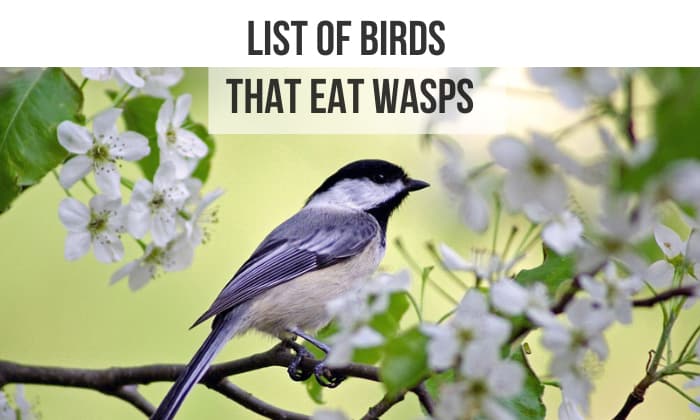 Wasps are pesky and dangerous insects. So, what solution will keep you safe when there are wasps in your surroundings? One of the surefire ways to do that is birds, an insect’s natural enemy.

There are multiple birds that eat wasps, and with them around, you won’t have to worry about getting stung. Sometimes a bird eats wasp nests too. What you need is to lure them to their next prey, wasps!

What birds eat wasps? The Black-Capped Chickadee is a strong bird that can withstand the freezing winter. Because of that, it can be found around the cold greenery of Alaska and Canada. This bird can lower the temperature and metabolism of its small body to survive in chilly weather.

This bird has quite an amazing memory and can recall specific areas. Despite this, Chickadees are non-migratory birds and only stay within one place.

Black-Capped Chickadees feed on insects, especially during the winter, and wasps can be their specialty. They’ll swoop in on their prey with their short, black, and white wings and lengthy tails. 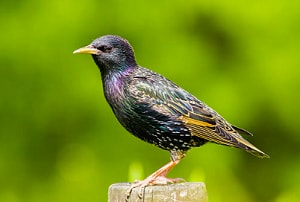 The European Starlings are birds that frequent Eurasia, which is why they’ve been named so. However, this bird can also be seen in places like New Zealand, South Africa, South America, and more due to its invasive behavior.

The starlings prey on their food, wasps included, with their sharp bills and snatch with their red-colored talons. Their feathers are a standard dark color but can be distinguished by the purple and green gloss that decorates them.

Magpies are birds that can commonly be spotted on continents like North America and Europe. You might find them as Texas birds or even Ukrainian birds.

This type of bird can be known as a scavenger. When finding small prey in nitty-gritty places, Magpies can eat their fill of flies, earthworms, and even butterflies with their dark coat and tidbits of bright green on their wings and tail.

Magpies can occasionally feed on wasps when they’re scavenging. However, the frequency of their meals being wasps is lower than the usual common insects they find. 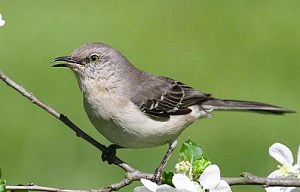 The Northern Mockingbird is named so due to their frequent residence in North America. Mockingbirds like this one tend to live in broad, flat spaces like grasslands or parks, which is one factor that enables you to see them in urban areas.

This bird will fly through the free land with its broad, black, and white wings and search for its next food. An iconic feature of Mockingbirds is their ability to duplicate specific sounds, which inspired their name.

Northern mockingbirds are known to be omnivores with a broad palette for food. This bird eats paper wasps and insects that fall under this menu, with the occasional fruits and seeds.

You might be familiar with the Common Myna if you’re from Asia. The Common Myna is a bird species that can be seen in many Asian countries. Their sharp, yellow talons and beak can be distinguished quite easily, along with their patched eyes and brown coat of feathers.

They’ll swoop in on their prey with these pretty features and feast on common insects, wasps included. Mynas are known to be omnivores but prefer creepy crawlies as their favorite meals. Myna birds eat hornets, bees, and wasps. 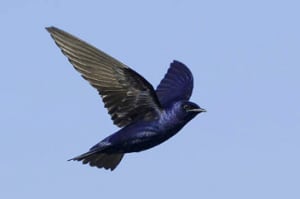 There is another wasp-eating bird that resides in North America, and it is the Purple Martin. They are an elegantly colored species that migrate to South America during cold weather and return to the equator during the heat.

Purple Martins are a spectacular species of insect-eating birds. They’re known to have a distinct flying style when swooping down to hunt their prey, including catching them with their wings.

To watch them fly with their dark, purple-tinted coat of feathers and feast on their favorite menu of stinging bugs is an exciting sight of nature.

The Common Blackbird, or to be more specific, the Eurasian blackbird, is a bird species found in various continents like Asia, Europe, and even Africa. Blackbirds tend to stay in thick forests where they can raise their young, but you may occasionally find them in local parks.

The Blackbird can be identified by their smooth, black, silky coat of feathers that cover its entire body. However, a contrasting feature that solidifies its iconic features would be how its bill and circled eyes are both colored in a bright yellow.

Blackbirds are omnivores feeding the usual bird food, worms, and seeds. Still, they’re also known to eat hunt-specific amphibians and even mammals. The best part about Blackbirds is how they hunt down wasps for feed and even destroy their nests.

The Cassin’s Sparrow bird is a wasp-eating bird in Southwestern US and Northern Mexico. Sparrows like this are birds that migrate in search of dry grasslands with lots of shrubbery during cold weather to live comfortably.

Sparrows are identified by their brown coat of feathers, round tail, and trim beak. They use these features to hunt efficiently for their prey of wasps and other insects, without getting stung or worms during the summer, and eat seeds when it snows.

We have yet another wasp-eating bird from North America. This time, Swallows. Swallows can also be seen in Asia, Europe, and Africa. During the summer, they stay in the north, but when winter comes, they retreat to the south

Swallows have sharply-shaped wings the same color as their dark backs tinted in a slight blue. They use their long tails and distinct wings to fly dynamically, especially when swooping fast toward their prey. In their diet, swallows eat wasps.

This bird will catch their prey mid-flight in a flurry of speed, including stinging insects, since they eat wasps and bees. 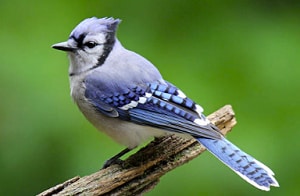 Another familiar bird comes into the list, Blue Jays. Blue Jays are primarily found in the countries of Canada, the USA, and Mexico, usually frequent areas with abundant forests. However, looking closer, you might find them around human residences.

Just like their name suggests, Blue Jays have a marvelous coat of blue feathers with a tad of white that go along with a crown on their head. Just like their striking color, Blue Jays eat wasps and tend to be aggressive, which goes quite well when hunting.

How to Attract Birds That Eat Wasps?

The surefire way to attract birds that eat wasps is to have a wasp’s nest right in your vicinity because that’s how they know food is abundant in the area.

If you don’t have a nest, you can get a fake wasp nest commonly made of paper and occasionally plastic. The trick is to bunch these nests together.

Another method of attracting birds to try would be to utilize bird feeders and wait to see if they attract wasp-eating birds.

You have to ensure that the feed you use in these feeders is specifically for birds known to eat insects. Would doves eat wasps? You Best get a wasp-eating bird. Place the feeder in a high place right beside some shade.

You can try growing plants that would specifically attract wasp-eating birds. A good example of these plants would be lavender, rosemary, and butterfly bushes. These ensure that butterflies and bees enter your yard, attracting insect-eating birds.

Get fruit trees or bushes if you don’t want to attract butterflies or bees. A surefire way to get omnivore, wasp-hunting birds to your neighborhood.

Wasps can be harmful to you, especially when they come in large numbers. Don’t let it become a true danger, and take the initiative to bring them to an end with some wasp-eating birds naturally.

It doesn’t take much effort to attract cardinals, mynas, or sparrows. These commonly found bids may just be the solution to your wasp problem! Find the perfect bird native to your home in this list of birds that eat wasps and get started.