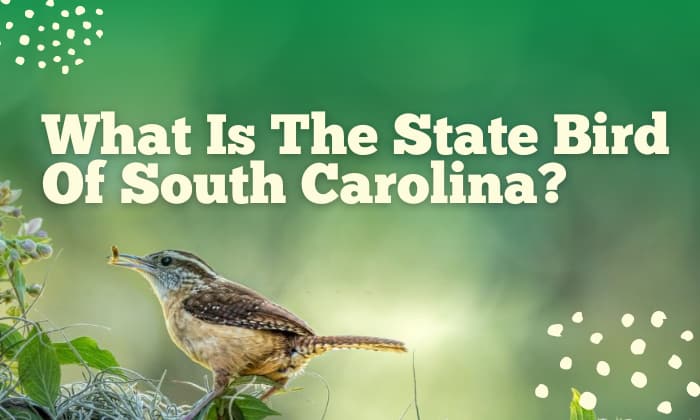 Each state in the United States chooses various emblems that are close to their heart to represent their territory. A state’s legislature decides their territory’s representative bird depending on multiple criteria, including the bird’s contribution to the state. 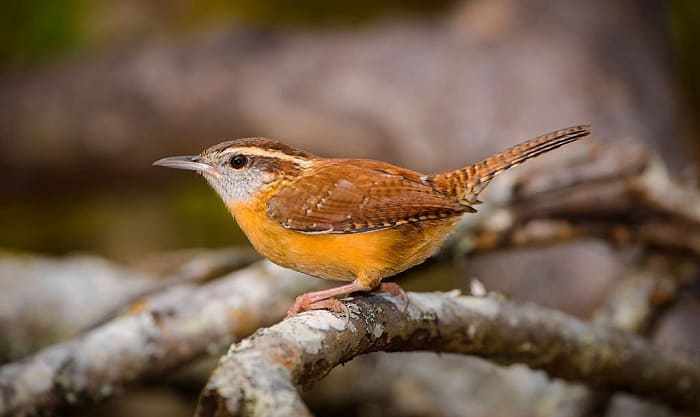 When talking about state symbols, it’s impossible not to talk about state birds. For example, if you find the question, “Carolina wren for South Carolina,” in any crossword or guessing game, the answer would be “state bird!”

The Carolina wren’s scientific name is Thryothorus ludovicianus, which translates as the “reed-jumper/jumping bird of Louisiana.”

Although the male and female Carolina wrens have no specific name, the males are called cocks, the females as hens, and the hatchlings as chicks.

The lively Carolina wren is typically tiny, ranging from 4.7 to 5.5 inches in length and weighing 0.6 to 0.8 ounces. Meanwhile, its wingspan can go as long as 11 inches.

3. Rate of Speed and Flight

Carolina wrens aren’t the fastest birds in the kingdom. Since flying is one of their weaknesses, they can only travel within short distances to gather food, reproduce, and craft their nests.

Moreover, these weak flyers don’t perform any graceful aerial acrobatics, only flapping their wings shortly with violent jerks from time to time.

Although there isn’t much data involving the lifespan of wrens, the oldest recorded was around seven years and eight months old by 2004. The Carolina wren in the discussion was part of the banding operations in Florida.

Carolina wrens feed on insects, fruits, and vegetables like most birds. Among their favorites include beetles, berries, caterpillars, fruit pulp, spiders, and as big as lizards and tree frogs.

As its name indicates, Carolina wrens usually reside in South Carolina, including the eastern United States, crossing as far as the southern portion of Central America through Texas.

Carolina wrens stay with their mate throughout the year. During its mating season, the females can lay around three to seven Carolina wren eggs, typically hatching in about 12 to 16 days.

It’ll take at least two weeks for the hatchlings or chicks to leave their nest. Still, the parent wrens visit their offspring, feeding them until they’re four weeks old.

The Carolina wrens construct their nests in various places, mostly in gardens and human dwellings, if not in the wild. These nests are usually 3.3 to 9.8 feet above the ground, crafted using twigs, grasses, feathers, cloth, and more.

Carolina wrens typically build their nests shortly after their mating season, sometime in late February to late August, April, and early June for other places up north. 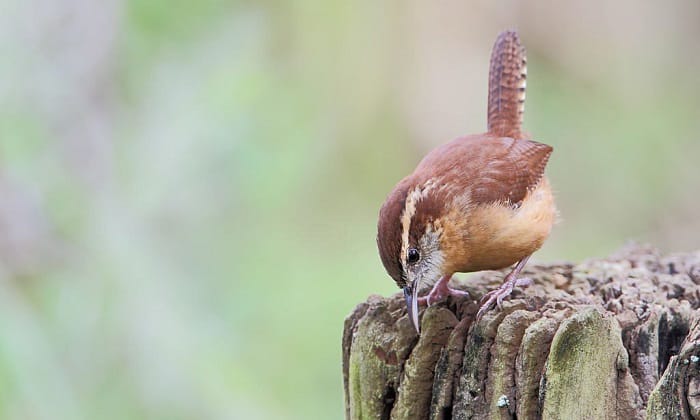 When was the Carolina wren proclaimed as the state bird for South Carolina?

The Carolina wren replaced the former state bird, the Mockingbird, making it a fitting choice among the other birds in SC because of its name, which includes the term “Carolina.”

Why is the excellent Carolina wren chosen as the state bird for South Carolina?

Apart from its name, which mentions “Carolina,” the Carolina wren was an excellent choice as the state bird for South Carolina because of its place of habitation.

In terms of agriculture, the Carolina wren helps eliminate pests, including caterpillars, making it beneficial for South Carolina’s agricultural sector.

How could you distinguish the Carolina wren from other wrens?

The state bird of Arizona and South Carolina are both wrens, but each animal has distinct features. So, how could you distinguish the Carolina wren from other wrens?

Compared to the Cactus wren, Arizona’s state bird, which has a speckled chest, the Carolina wren has white stripes over each eye, followed by its chestnut brown and black body. Check out the Caroline wren’s, one of SC birds, pictures here:

What is unusual about the state bird of South Carolina?

Whether it’s the state bird of Arizona or South Carolina, wrens, in general, are unique from other birds because of their songs.

The lively and vocal male Carolina wren sings loud enough to attract its potential mate, believed to be one of the most vociferous among other birds.

Carolina wrens aren’t migratory birds, explaining why most of these birds reside mainly in Eastern and Central America. Apart from being weak flyers, these wrens are also sensitive to the cold so they wouldn’t last in extreme cold weather conditions.

According to the IUCN Red List, the Carolina wrens are currently under the Least Concern (LC) category, which means they are not endangered.

However, they are not safe from harsh weather conditions, parasitism, and continuous threat to their habitat, affecting the species’ population.

Carolina wren is protected by the state legislation. It declares a fine or jail time for anyone caught intentionally killing the bird to protect the Carolina wren.

In addition, for more about the birds present in North Carolina, click here to explore now!

Apart from its name, the Carolina wren became the official feathered representative of South Carolina because of its fantastic song, place of habitation, and contribution to the state’s agricultural sector.

We hope this article helped you learn about South Carolina’s state bird, the Carolina wren, which discussed valuable information that will make you love this songbird more!