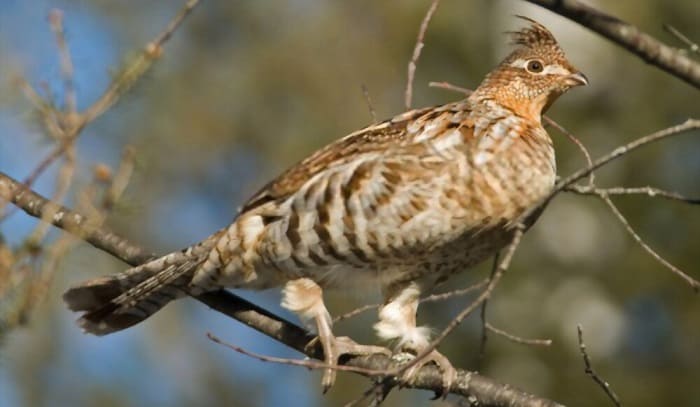 The State Federation of Women’s Clubs advocated for this bird to represent the Commonwealth of Pennsylvania. The ruffed grouse achieved this position thanks to their role in feeding the settlers.

Everything About the Ruffed Grouse

The natural habitat of the ruffed grouse is the woodland in the Appalachian Mountains. They like heavily forested regions that give them cover from predators. Ruffed grouse detest open fields, so birders face a challenge in seeing this chunky bird species. In the wild, these game birds can survive for 8.5 years.

This bird breed is typically solitary, and members of the species only come together during the breeding season.

Females are the best mothers, since they take care of their young until they can handle the world on their own.

Why Is the Ruffed Grouse the State Bird of Pennsylvania? 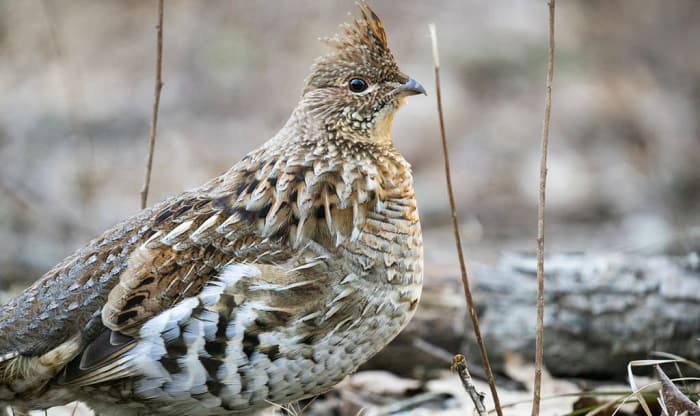 The early settlers of the Coal State mainly survived thanks to using the ruffed grouse as food. And because of their great contribution to the survival of the settlers, they became the state bird of Pennsylvania.

These birds continue to serve as sustenance to humans to this day. This bird species is non-migratory, and they are ground-dwellers.

The identification of the ruffed grouse is easy, thanks to their similarities to chickens. Their toes have pectinations that allow them to seamlessly navigate the snow.

Ruffed grouse have two kinds of morphs, which are brown and gray.

Over a quarter of the diet of the adult Pennsylvania state bird consists of fruits, such as blueberries, thorn apples, and strawberries. They also like to munch on buds and leaves, particularly the Christmas fern. And because ruffed grouse mainly feed on fruits, they’re a concern to farmers.

However, as young birds, they prefer insects. As adults, the ruffed grouse transitions to eating mainly fruits.

As for predators, ruffed grouse are at risk of being preyed on by humans, foxes, goshawks, bobcats, great-horned owls, and fishers.

During the breeding season, the PA state bird claims a territory of 6-10 acres of woodland. Mating is quick, and then the females go and find a spot to raise their young.

To defend and mark their territory, the male ruffed grouse perches on a big rock or wood, strongly flapping their wings to produce a threatening drumming noise.

And when it’s time for nesting, the females choose a spot where dry leaves are accumulated. During incubation, they tend to leave their eggs behind to search for food.

Facts About the Ruffed Grouse 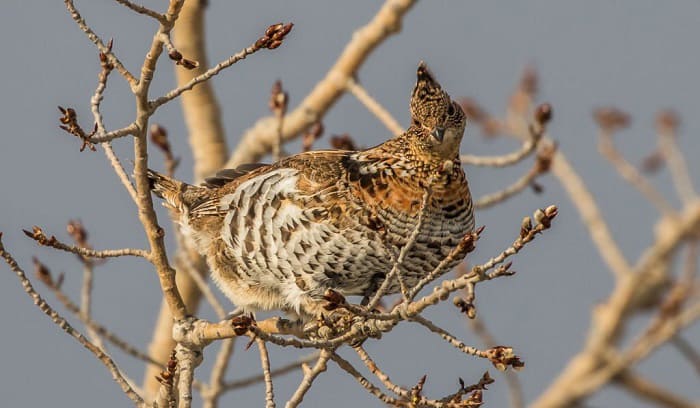 The name of the ruffed grouse came from the fact that they have a hidden nape ruff that they show to potential mates. There are indeed many interesting facts about this bird species. Let’s find out more.

The ruffed grouse Pennsylvania bird is built of tougher stuff than other avian species. They can efficiently thrive during frosty days and nights, unlike turkeys, quails, and other game birds. They even spend their time roosting beneath piles of snow.

Riffed grouse are birds in nature, but when they drum their wings heavily in the air, humans can hear something like an engine starting. This is the major reason why this bird species is very efficient in defending their homes.

Ruffed grouse are game birds, and so it’s not illegal to hunt them down, so long as there is a permit to do so.

In the hunting process, hunters usually use dogs to detect these birds. These birds are often on the ground, so dogs can easily smell their scent. Fortunately, despite the hunting, the ruffed grouse are not at risk of getting extinct.

The Pennsylvania grouse enjoys dust bathing daily, and their dusting spots are usually where you can find excess feathers in ruffled soil. The dusting is often done during summer.

Ruffed grouse have a few nicknames, with partridge as the main one. These stout game birds are also called thunder chickens or drummers.

These alternative names are based on their behavior of constantly drumming their feathers. Even in courtship, they use non-vocal cues and drums to attract females.

One of the most interesting behaviors of the ruffed grouse is their ability to stay absolutely motionless. They display this performance when they sense the presence of predators nearby. Once the threats are gone, they hurriedly fly away to safety.

Unlike other bird species, the ruffed grouse have a taste for bitter food. They even eat toxic ones. This bird species eats bitter plants because their main diet revolves around fruits and leaves.

The Pennsylvania national bird has a population of 18 million. And though they have a couple of predators, the males can defend their homes, and the females safeguard their eggs and chicks.

Thanks to the extra and super lengthy two pouches of food in the stomachs of the ruffed grouse, they can digest a large amount of food. This allows them to eat more than other birds do and makes it possible for the ruffed grouse to survive the winter months.

Now, you have a clear picture of what is the state bird of Pennsylvania. This game bird has been hunted down for generations, but their population remains vast. Dogs usually aid the hunters in catching ruffed grouse during hunting season.

The Pennsylvania state bird looks like a chicken, and males are unique with their drumming sounds.

Kindly share this post to your friends, and let us know what you think. We always welcome comments from our readers.

Before you go, don’t forget to check out these related posts to other state birds: