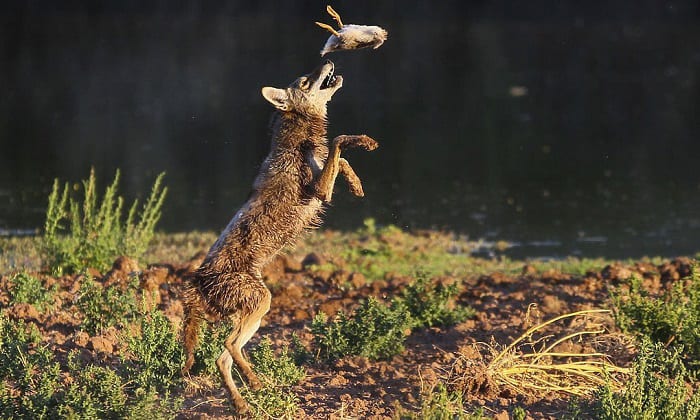 Birds are predators themselves to insects, but what eats birds? The list is long, which includes cats, snakes, owls, falcons, baboons, and coyotes.

The avians are intelligent creatures who are always cautious about their predators. And when they forage for food in yards, shrubberies, or parks, they tune in to their instincts for any animal that can make them their next meal. 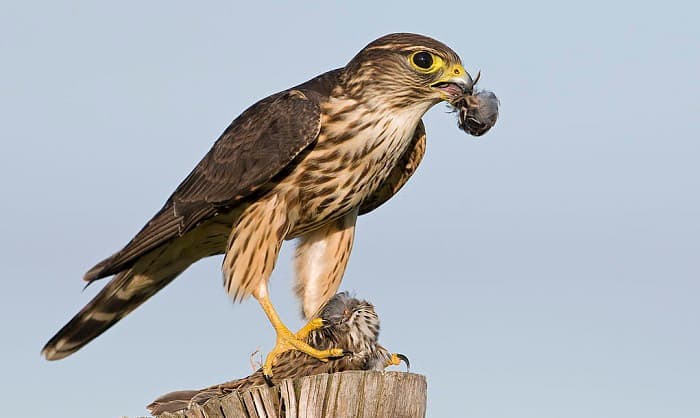 Animals that eat birds are referred to as avivores. These predators know how to practice stealth in order to catch their prey. They usually outsmart the avians, and are of course bigger in physique so they’re able to maneuver the birds seamlessly.

The natural bird hunters are dangerous for the population of birds, but every living creature on earth needs to eat.

Let’s take a closer look at the top 20 predators of birds in the world. 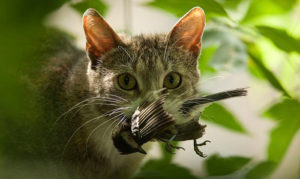 A domestic cat eats small birds — that’s why many homeowners with cats are always cautious with having avians around. In fact, house cats are one of the main predators of avians and are responsible for the deaths of at least one billion birds per year. They simply love the chase whenever birds come to their yards.

Aside from domestic cats, wild cats such as the bobcats also hunt birds. They prefer fledglings and are super skilled in sneaking to catch their bird prey.

Raccoons are a major threat to hatchlings, nestlings, and fledglings. These mammals are not into adult birds, but they eat baby birds a lot.

They like raiding nests of birds to gain access to the eggs and the young avians that are helpless. They do munch on wounded or dead birds.

Squirrels are great foragers of food, and one of their favorite meals is a bird. They annoy homeowners by beating the avians to the bird feeders. That’s why it’s wise to install the feeders at least five feet off the ground.

Also, squirrels are known to watch the nests of birds and wait for the parents to leave in order to feast on the baby passerines. 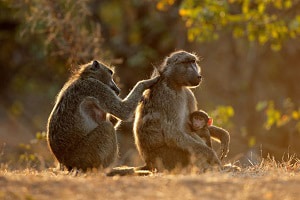 Baboons are omnivorous, diurnal, and terrestrial creatures that are fond of hunting birds. There are six species of this animal that consume birds, which are:

Falcons are gifted with superior speed, and there are approximately 40 species of them around the world. Their diet mainly consists of birds of other species, but not including falcons.

With an extremely sharp vision and powerful talons, they can easily grab smaller birds and eat them.

Coyotes are extremely skilled in grabbing birds and delivering them to their deaths. They often eat birds that are slow or near the ground. The sad thing is, many coyotes will not stop until they have finished off the whole flock of avians. 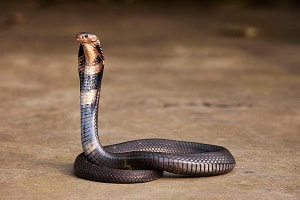 The slithering snakes are carnivores that like to feed on adult and young birds. They practice stealth in hunting for their prey, and snakes eat birds in whole.

Birds are at risk of being eaten by snakes because they can climb trees, posts, and high structures. And so avians are not completely safe when perched up high from the sneaky snakes.

Owls are one of the top bird predators, especially the Eagle owl species. They prefer smaller birds, and eat what they can, particularly in times of scarcity of food sources.

Owls have their own hunting spots, and their keen vision helps them find their prey easily. They also have superior hearing abilities, so no bird prey can escape their grasps.

The small and slender body of a weasel makes it easier for this creature to hunt birds for food. Weasels especially like chickens and avian eggs. And when they hunt, they usually take more birds to store as meals. An interesting fact is weasels can eat half their body weights a day.

Foxes in general are cunning, and if you’re wondering what animals eat birds, know that red foxes do. They are super patient and can wait for hours to finally catch their bird prey. Red foxes also like to disturb avian nests and feed on the baby birds and eggs.

Aside from the red fox species, the arctic foxes are also predators of birds. These animals also eat lemmings and fish.

The carnivorous hawks are birds that prey on other avian species such as woodpeckers, quails, and doves. They also like to feed on young birds. Hawks kill their prey by cutting off the heads of the birds and feed on their intestines.

Hawks typically attack a group of birds, but they only catch up to two avians at a time. Additionally, hawks like to hunt easy prey such as turkeys and chickens.

The white-tailed deer species roams in the forest and is partly herbivores and carnivores. They eat young avians in the wild, apart from their usual plant-based meals.

Though it is not entirely clear why this deer breed eats birds, the fact is they do.

Badgers are mammals that are known to constantly raid bird nests for their meals, especially the waterfowls’. They also consume rooks, crows, and gulls. Badgers are commonly found in North America, Europe, Africa, and Asia.

There are indeed many birds predators in the world, but bats are some of the few nocturnal creatures that hunts for avians at night. They are known to catch small birds while in flight, especially when avians are flying in groups.

Bat species that are fond of feeding on birds are tri-colored bats, hoary bats, and Indiana bats.

Eagles are carnivorous avians that consider other birds as meals. They particularly like to feed on pink robins, waterfowls, skuas, silvereyes, roadrunners, and gulls. These large avians are equipped with large feet and powerful claws, plus fast flying speeds to catch their prey.

This strong raptor is usually successful in their hunting journey thanks to their superior strength.

Fish are not really high in the food chain, but when birds fly low enough for the fish to touch them, they become their meals.

Though fish eating birds is not easy to imagine, it happens all the time. Plus, certain fishes are skilled in catching flying birds.

As difficult as it is to imagine, some insects actually have the ability to catch birds and feed on them. Wasps, hornets, and praying mantises, for example, can all eat avians.

Bird-eating frogs pounce on the birds that come close to the edge of streams. This fact is proven by the bird wings found in the large-mouthed frogs that were subjected to scientific studies.

Sea anemones may not be blessed with speed, but they are masters at taking advantage of trapped birds. If they see avians that are injured or stuck due to the tide, they will feed on them. Anemones are known to eat alive or dead birds, which is good for their survival.

Aside from the usual predators of birds, humans are also avian eaters. We love to eat chickens, ducks, and game birds. And we also eat the eggs of ducks, geese, and quails. However, people don’t usually eat bird species such as robins, mockingbirds, swallows, and parrots.

What eats birds? Aside from animals, humans too are known predators of the feathered creatures. The good news is, birds keep on reproducing, so even if they become meals for many animals and people, their numbers are still strong.

The list of bird predators is super helpful for birders in knowing what animals are threats to their pet or yard birds. We hope you gained new knowledge from this post. Kindly share it to your social media, as well as leave us a message.

Furthermore, discover other topics related to birds such as: