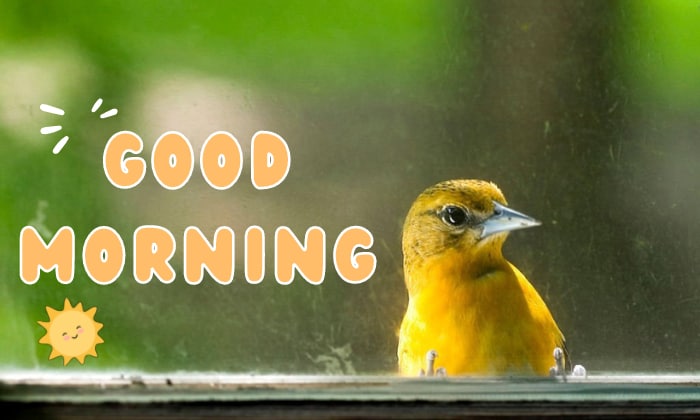 If you woke up from a bird tapping on window every morning, know that there are several reasons behind this behavior. It could be because of their reflection in the window, foraging for food, or trying to see what’s going on inside your home.

Let’s understand more about this phenomenon and what you can do to stop birds from waking you up in the morning with their tapping.

Types of Bird Noises and Sounds 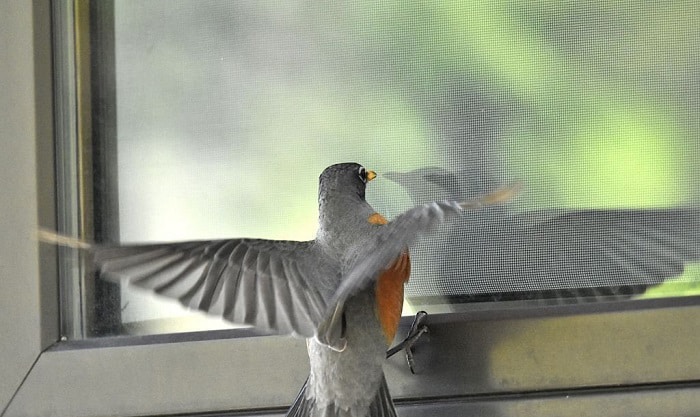 We all love to listen to birds chirp away. For an inexperienced ear, some of these sounds can be loud and disjointed. But if you are a birder, you’ll know how to decode the sounds these fascinating creatures make.

Learn about the three primary kinds of bird noises. These could help you find out what that bird tapping and tweeting on your window wants.

Generally, bird calls are piercing and loud sounds which only last for a few seconds. It’s a form of communication among the birds, important to them in urgent situations. That’s why you might feel uncomfortable listening to the repeated short chips of the birds.

There is so much variety in this type of bird noise since they can tailor it depending on the situation. There can be a threat, taking flight, or trying to keep in touch with other birds in their flock. Bird calls are further categorized into:

Bird songs are longer than the call and are more complicated in their melody, with many syllables formed together. That’s why when listening to a bird singing, we feel pleasant rather than alarmed like bird calls.

Bird songs differ in quality and the time of day they sing depending on the species but they all serve the same purpose: to tell off invaders, mark their territory, and charm a possible mate.

Non-vocal bird noises can be described as body language to humans. It is often overlooked, but many, unless you are a keen birder. They are used together with calls and songs to communicate a message. Some examples of non-verbal noises birds make are:

Does a Bird Tapping on Your Window Mean Something Spiritually? 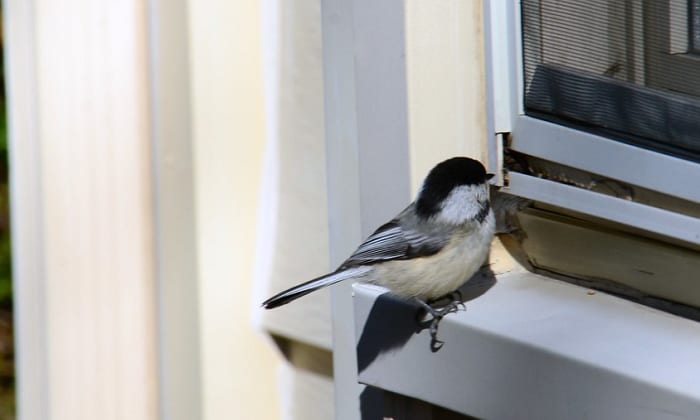 There is a superstitious belief and spiritual meaning when birds tap on windows. It varies depending on the culture and the bird specie but these are four possible reasons:

Are Birds Trying to Get in Window When Knocking on It?

A bird knocking on window has several explanations but it has something to do with the reflection they see on it. They might either confuse it for open space and think they can get through it. Another reason is birds mistake their reflection for rivals and are trying to scare them away.

It is rare but it is also possible that your feathered neighbors want to come in. If you have bird feeders, they might be getting your attention to refill their food source.

A bird peck at my window every morning is getting annoying, and I am concerned about what could happen to the bird. What should I do? Many homeowners asked this question when they saw a bird attacking window.

Here are some things you can do to put a stop to birds assaulting your windows. Find the one that works for you and give it a try.

Constantly giving your feathered neighbors food near your home or by the window will encourage them to come back and attract other birds.

The window attack might happen when you are not around and the window is closed where the birds can see their reflection. If your neighbor is feeding birds, talk to them about it.

If you already have bird feeders and giving them up is not an option. You should make sure there is enough distance, approximately 30 feet, between your home and the feeding station.

Birds prefer to stay with their younglings during the breeding season, so you don’t have to worry about them getting close to your windows.

Consider window screens if you don’t have one already. For those who are taking off their screens since the insects are not around, try putting them back if birds are hitting your window. This is an effective way to remove the reflections birds perceive as threats.

4. Shut the blinds or curtains if possible

This is a simple way to break the bird’s reflection in the window. Close the shades or curtains when leaving the room or house. You can also keep them halfway closed, so there’s still natural light coming into the room.

While this does not really disfigure the reflection, it delivers the same result as birds leaving your window alone. The noise and inconsistent movement of the wind chimes will startle and scare them away.

6. Use an ultrasonic bird repeller

These devices are designed to make a high-pitched noise that only avians can hear. It is effective in deterring crows, seagulls, pigeons, blackbirds, and bats. This will not bring harm to the birds but only stop them from coming close to the window.

If a bird keeps flying into window accidentally rendering them unconscious or dead, that is another situation. But using the above tips can also work in stopping birds from colliding with windows.

Why Are Birds Destroying Window Screens?

Some homeowners witnessed birds aggressively tearing the fibers of their window screens. If you have the same experience, you might want to know the reason for such behavior.

Birds are seen gathering nesting materials during the breeding season and found out that your window screens are ideal for constructing their nests. You can discourage any bird from pulling your screens apart by giving them another source of the material.

Consider replacing your screen with metal and leaving the old ones for the bird. If that is not an option, hang something reflective within close range of the windows.

A red bird hitting window repeatedly is an aggressive behavior often observed in male birds during nesting season. What they see in their reflection in the window is another bird trying to take its territory. To drive them away, they will tap their beaks on the window.

Since it is their reflection, the bird they see won’t leave and so they will repeatedly hit the window until they get tired. They might leave but the cycle will repeat when they fly at the window again.

So, a bird tapping on window every morning can be because of their reflection or the fact that they are seeking food. You also read about its spiritual significance and how to stop this aggressive behavior. These are important information, especially for new birders who want to understand more about their feathered friends.

We hope you found reading this article helpful in becoming a seasoned birdwatcher. If you have any interesting facts related to the content above or have experienced the same situation, share them with us. We love hearing from you!