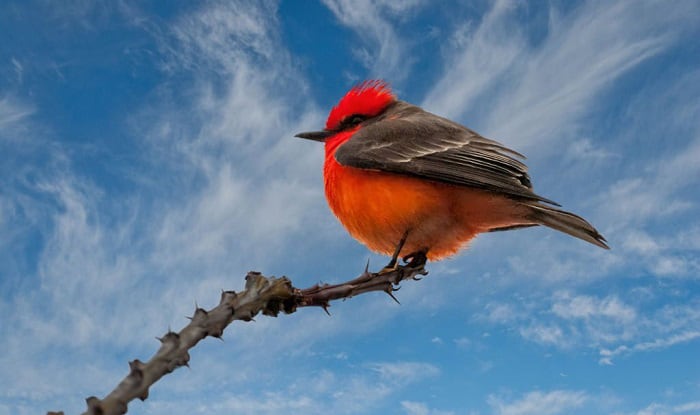 Red birds of north America are plentiful. They include the northern cardinals, vermilion flycatchers, summer tanagers, common redpolls, red grosbeaks, painted buntings, house finches, and more. These avian species may not be completely red, but a huge or small portion of their bodies is red in color.

The 15 birds we feature on this post all exhibit the crimson hue, but they have their own behavior and uniqueness. Getting to know them helps birders identify their favorite birds.

Birders are always enthralled by red colored birds. These avians are absolutely fascinating, and just looking at their red shade makes people happy.

Through this article, you’ll learn 15 red birds names. Simply explore the list of avians and find out how they differ in description, habitat, breeding, and more. 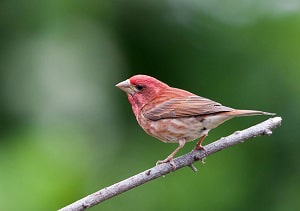 There are many red birds in NY, and one of them is the purple finch. This bird species has a small brown tail, raspberry scarlet head, and brown wings. And they are found in mixed woodlands. 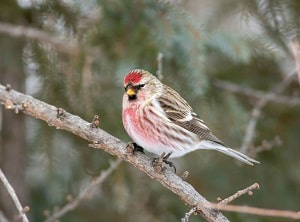 Common redpolls are found in Illinois, but they are also widely distributed in other parts of northern America. Their favorite meal is tiny seeds from various trees, wildflowers, sedges, and grasses. But of course, they also like to hunt for insects and spiders, and munch on feeder foods.

This bird species are mainly white and brown, but they have a distinctive red patch on their heads. In the breeding season, females lay 2-7 eggs that are pale blue/green with purple markings. The incubation time is 11 days, and the nesting period is 9-16 days. 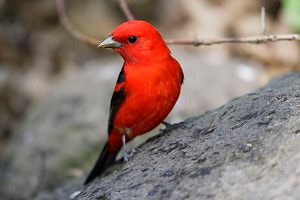 The scarlet tanagers are medium-sized passerines that are found in Michigan and other states in North America. They have a body mass of 23.5-38g, length of 6.3-7.5”, and wingspan of 9.8-11.8”. Their vivid red color is strikingly beautiful, coupled with their black tails and wings.

This avian breed builds their nests in deciduous forests. They require 10-12 hectares of forest to accommodate the breeding season. Their breeding season is in August to September, and their nesting period lasts for two weeks. And in every clutch, there are 3-5 eggs produced by the females. 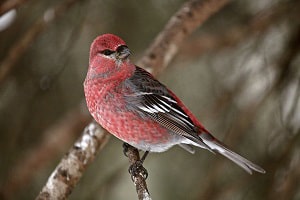 Birders in north Carolina always appreciate the sight and songs of the red crossbills. These small birds are also referred to as common crossbills, and they’re unique thanks to their intersecting bill. Males are gifted with a bright red/orange shade, while the females have a yellow or green hue.

From June-September, they breed in areas where there’s an abundance of their favorite seeds. In fact, red crossbills are nomadic birds. And in every nesting period, there are 2-6 white eggs with spots of red. 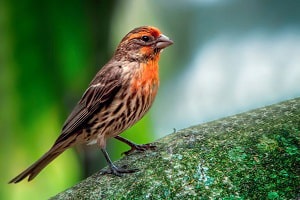 Red birds in Virginia include the house finches. They originate from North America, and then spread to the east and reached Hawaii. This bird species has reddish heads, shoulders, and necks. Interestingly, the intensity of their coloring actually depends on their food intake, which are berries, seeds, and grains.

House finches are migratory birds, and they breed in residential places and boroughs, particularly in holes. Nesting happens from February-August, typically with two broods. In each clutch, there are 2-6 light blue-green glossy eggs with black marks. The males are the main provider of the family. 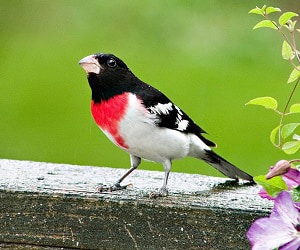 One of the red throated birds north America is proud to have is the rose-breasted grosbeak. This avian breed is nicknamed “cut-throat”, and they love seeds. They are distinguishable with their visible red chest patch. Males have black tails, heads, backs, and wings.

The rose-throated grosbeaks can survive in the wild for 7.3 years, and 24 years when held captive. Interestingly, the male birds are the only ones out of 70 migrant species to produce sperm while still in migration. While nesting, the females lay up to 5 light blue to green eggs with violet to brown markings. 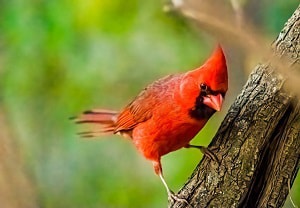 The northern cardinals are the most bewitching red crested birds north America has ever seen. They have a bright red body with a mysterious-looking black face mask. This bird species is also called red cardinal, redbird, common cardinal, or simply cardinal. They are medium-sized at a length of 8.3-9.1”.

Cardinals are granivorous, but they also eat fruits and insects. In the breeding season, males claim their spots through singing. And their female partners lay 3-4 eggs for every 2-4 broods. 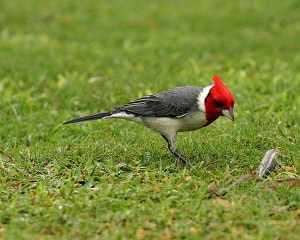 The red-capped cardinals are the most popular red capped birds of north America. They are 16.5cm long, with a body mass of 22g. This avian breed has a distinctive red head, which makes them eye-catching for thousands of birders. Other parts of their body have black, white, dark grey, and brown-orange colors.

Red-capped cardinals participate in the breeding season in June to September, but nesting also happens between February and March. In their open cup-shape nests, the females lay 2-3 eggs. 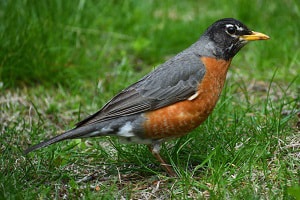 The American robin is a red bird yellow beak species. It is the state bird of Michigan, Connecticut, and Wisconsin. This migratory passerine escapes the cold and travels to Canada, Mexico, and the Pacific.

Robins are blessed with a beautiful red-orange chest, gray to black head, white throat with markings, brown back, and white belly.

They love to feed on fruits, invertebrates, and berries. Once they come home from migration, they start making a family immediately. American robins have 2-3 broods per year, with 3-5 pale blue eggs each. 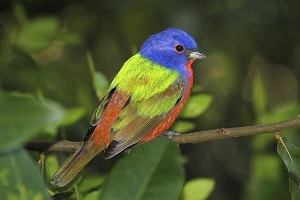 A red bird with yellow wings is not easy to find. But a gorgeous passerine with a patch of yellow green is definitely the painted bunting. It has a dark blue head, crimson rump, green back, and red underparts. 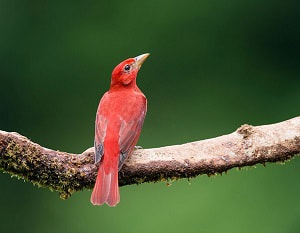 The summer tanager is a red small bird that measures 6.7” in length, 29g in weight, and has a wingspan of 28-30 cm. Males of this species are rose red in hue, and they get their coloring from their diet of berries, bees, and wasps. They look like the hepatic tanager, and their songs resemble those of the American robin.

Summer tanagers prefer to stay in oak woodlands, and they breed in higher ground. In the breeding season, they have 1-2 broods, and each clutch consists of 3-4 light blue to green eggs with hazel spots. The females do the incubation, while the males feed the whole family. 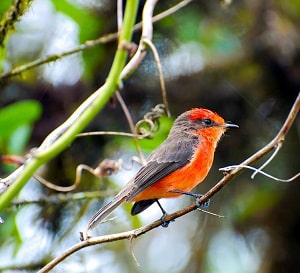 The vermilion flycatcher is an American redbird that looks like the northern cardinals thanks to its vivid red crown. This bird breed has red breasts, brownish wings, red underparts, and brown tails. They shed their feathers during the summer, and gain beautiful new ones after the molting period.

Vermilion flycatchers are monogamous, but not sexually so. In each open nest, the females lay white 2-3 eggs marked with brown spots. And after 15 days of incubation, the young birds leave their nests. Then the male and female avians move forward to create a new brood. 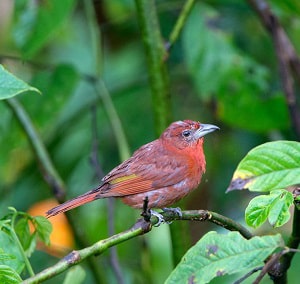 There are many types of red birds, and the songbird hepatic tanager is one of them. They thrive in open forests, as well as breed in open spaces. This avian species feeds on insects, fruits, nectar, berries, and spiders. And when nesting, they prefer to use tree forks that are 15-30 feet above the earth.

The broad and flat nest is the new home of 3-5 eggs, and there is only one brood per year. The eggs are blue-green in color, coupled with violet or hazel markings. Once hatched, the helpless hatchlings are fed by the males. 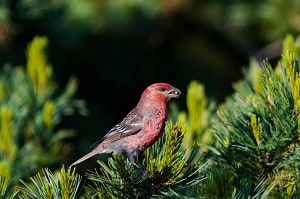 They live and breed in coniferous woodlands, where they eat seeds, insects, berries, and buds. When not nesting, these avians form a group to forage for food, but stay in pairs or solitary when mating. 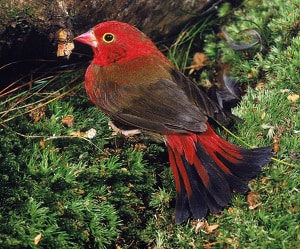 The red-billed firefinch species have a red plumage, except for the chocolate-colored wings. They have a golden eye ring, pink bill, and a length of 3.9”. These birds are not afraid to come close to humans and feed on feeders. Plus, their soft and melodious songs are relaxing and beautiful to hear.

Red-billed firefinches create a big domed nest made of grass. It is where the females lay 3-6 white eggs and both parents care for their baby birds.

The red birds of north America continue to awe birders, especially when they’re in flight. The birds we featured are either migratory or permanent residents. But no matter where they go, they always come back to North America.

We aim to be informative regarding the most popular red birds in the country. Kindly help us spread this post so other birders may learn what you now know. And if you have questions, please leave a message.