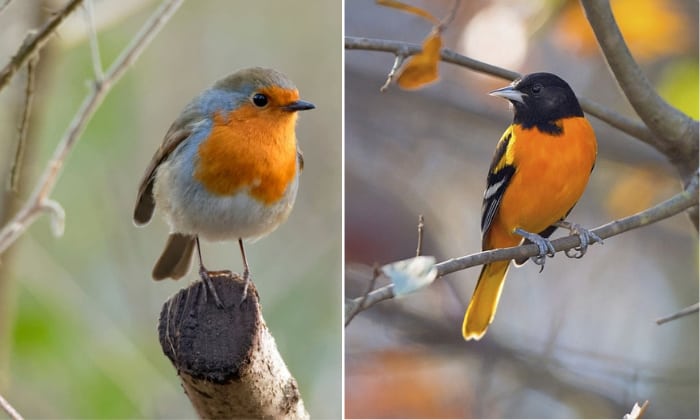 Most bird lovers and bird watchers can point out the similarities between an oriole and a robin. It is very difficult to tell these two types of birds apart because they look similar and share some of the same behaviors. So how do we not get confused? What is the difference between robin and oriole?

To draw the comparison between robin vs oriole, let’s explore the article below. These two birds are insectivorous and live in the same area, so we can only tell the difference between the two by looking at their appearance and flight patterns.

Oriole Vs Robin: How to Differentiate 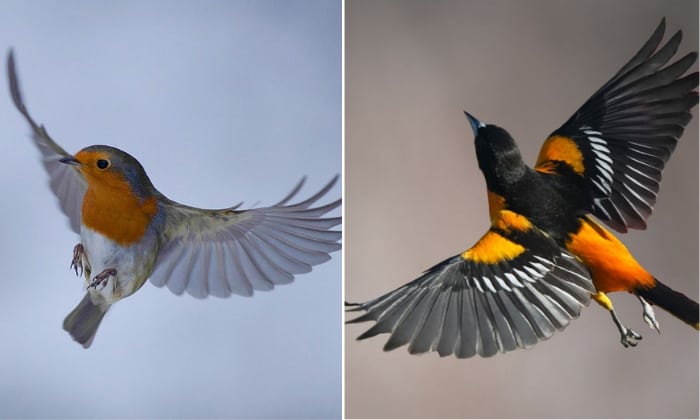 At first glance, orioles and robins look pretty similar, their chests are orange and they are quite agile, thus causing confusion. However, if you look more closely, you can still see the outstanding features of each species. We will show you a few distinctive features you can use to tell them apart.

Overall, robins are larger than orioles at about 10 inches in length. The robin is a member of the thrush family with a stocky, rounded body, and is sometimes depicted as having a belly. Meanwhile, orioles, which are part of the blackbird family, are slimmer and smaller, typically 6 to 8 inches in length depending on the species.

Whereas both birds have characteristic orange chests, the color differences may be quite striking. Baltimore orioles’ chests are vivid orange and Bullock’s orioles’ ones are duller orange. The adult oriole has a jet-black head and back with orange underparts and tail feathers. The plumage of the adult female has a greater variation in density. Their heads and backs can be brownish or yellowish, the upper tail is golden brown and the lower tail is yellow.

The robins have gray-brown upper and lower feathers, and warm orange underparts. As the robins fly, you can see a white patch on the lower abdomen and lower tail. Female robins have a lighter head than males.

Another striking difference is their beak. Orioles have a silver-black bill, while robins have a yellow or black bill that changes seasonally.

Robins bounce about the ground, peck and tug for worms. They are mostly ground feeders, looking for hidden insects. Robins and orioles both nest and perch on deciduous branches, but orioles spend their time in the upper branches, searching for bugs on the plants. Their nests are built on the upper branches as well. Orioles will occasionally descend for fruit on a shorter tree or a slice of orange dangling in a garden. In the summer, orioles live in the northern and central United States before migrating west and south for the wintertime. Robins may be seen all year in the United States, but many relocate to the southern regions during the winter.

In addition to the robin, there are other birds that look like orioles, such as the towhees. Let’s watch the video below to distinguish these birds.

The male oriole’s clear, smooth, whistling melodies announce the arrival of spring in North America. His song is made up of a brief succession of paired notes that are replayed 2–7 times. The timbre of the flute-like is deep and rich. Because the male sings to claim and protect a mating area, you can’t hear the entire song during the winter months. The female Oriole sings as well and her shorter melodies might be messages to her partner. You can listen to the song of the Baltimore oriole in the link below:

The American Robin’s melodic song is a springtime staple. It’s a series of ten clear whistles of repeated words that are usually described as cheering up. The word varies in tone but is delivered in a constant cadence, with a break before the bird resumes singing. The music becomes faster towards daybreak. To interact with others, American Robins typically produce a muttered cuck or a piercing yep as an alert signal. Here is a video of the lovely robin’s song:

Oriole Vs Robin: The Confusion

The above mentioned the differences between orioles and robins, but it would be remiss if we did not mention the similarities that cause people to confuse these two birds. In addition to their similar appearance, both orioles and robins are:

How to Attract Orioles to Your Garden

Orioles, like other birds, rely on food, drink, and shelter to exist. You may turn your backyard into a preferred habitat by satisfying all of these demands and attracting to oriole’s unique interests for each. 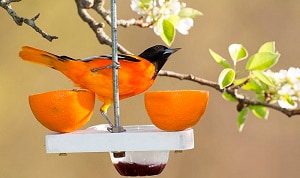 One of the most common errors that bird watchers make when attempting to draw orioles’ attraction is not placing bird feeders early enough. Feeders should be installed a few weeks before the birds are expected to visit your garden. It won’t matter to most birds if you put up your feeders late. However, as orioles are instinctual, and timing is crucial – if they can’t spot feeders in your yard, they’ll go elsewhere.

Enhance the Look of Your Landscaping 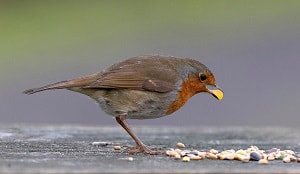 Hummingbirds and Orioles have a lot in common. One of these commonalities is their preference for certain hues. Hummingbirds are captivated by red, whereas orioles are especially fascinated by orange. They also enjoy oranges as fruit – but we’ll get to that later.

You may try to place orange feeders in high-traffic areas of your yard to attract the attention of visiting orioles. You may also try hanging orange ribbons around trees, fences, or shrubs to entice them to land. They may opt to stay after they discover that your yard provides an ample food supply.

When spring arrives, orioles require more energy as they approach the end of their migration. Orioles want sweet, high-energy meals to meet this demand. You can place honey, jelly, and fruit feeders in your garden to provide these gorgeous birds with the delicious foods they crave.

Water is essential for all birds, including orioles. You should provide these lovely songbirds with bird waterers and bird baths. You should avoid overfilling the bird baths, the water level should be no deeper than 3 inches.

The first step is to make sure that your garden has the trees and plants that orioles prefer for building homes. Hooded Orioles, for example, stitch their nests to the undersides of big hanging branches from palm trees, yuccas, and other plants.

You may assist them by stocking a basket with items such as yarn, twine, and fabric strips. The more easily they can acquire supplies, the more likely they will make a nest in your garden!

The Powerful Meanings Behind Robin

According to the Spirit Animals website, the symbolism of the robin represents the promotion of fresh growth and regeneration in many aspects of life. As a result, Robin indicates that you may create changes in your life with pleasure and happiness. This spiritual creature, like the Goldfinch, tells you how to sail the winds of desire within your soul. You will become more self-sufficient and independent as a result of this shift.

The robin also emphasizes that you should let go of personal concerns and problems, especially those that do not support your larger purpose. It’s time to trust your inspiration and welcome new beginnings.

If you see a robin in your dream, it is also a sign of new beginnings. In other words, it is time to develop yourself more. In addition, the robin bird in a dream also represents sacrifice. Therefore, you should consider carefully before deciding something at this time.

We hope you find this article on the topic of robin vs oriole interesting and helpful. At first glance, they may look similar, but their differences lie in their sizes, coat colors, some behaviors and their singing voice.

If you have ever seen these two birds and discovered any distinctive features of them, do not hesitate to share with us!

Furthermore, you also can refer more to other topics about the differences between bird species: