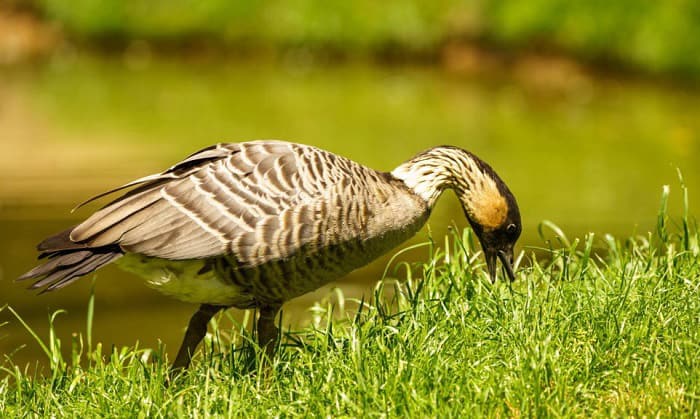 In 1957, The Aloha State chose the nene goose as their state bird. And that answers the question “what is the state bird of Hawaii.” As unique as their name is, which is pronounced “nay nay,” this goose is also rare. They are an endangered species, and unlike other island geese, nenes can still fly.

Nenes are quiet birds that must not be disturbed or fed. Read on to know more about them.

Everything Birders Need to Know About Hawaii State Bird Nene 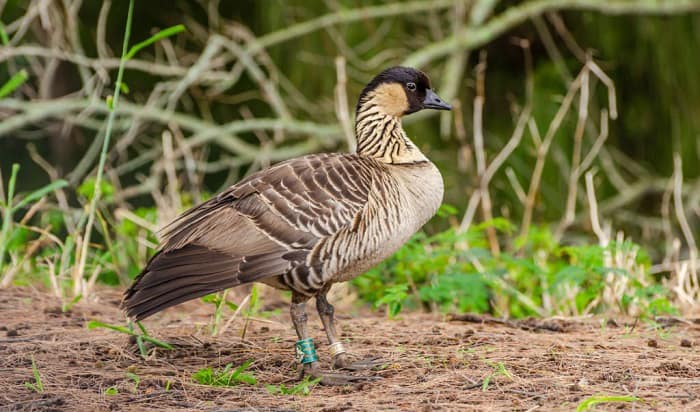 The Hawaii’s state bird can be found in grasses, bushes, lava plains, sand, golf courses, and pasture lands. They are exclusively living in Hawaii, Kauai, Maui, and Molokai. Due to their declining population, efforts have been made to breed this goose species outside of the Aloha State.

Among other birds native to Hawaii, the nene was chosen as the state bird mainly for their conservation status. The state was conducting a public awareness initiative on the need to take care of nature and animals. And the nene breed was the perfect example and representation of their campaign.

1. Description Of The Nene Bird

Hawaii state bird, nene, is a goose of medium build, and their wings are perfect for flying. Males are larger than females, but both sexes have the same appearance.

Also juvenile nenes have the same look as the adults. But their color is a bit more brownish, and the streaks on their necks are not as apparent.

The official bird of Hawaii is a herbivore that feeds on plants, fruits, buds, seeds, flowers, and leaves. However, in some cases, nenes do feed on insects and fish. But this goose species prefers the ohelo berry the most.

Good thing is, nenes are friendly to the environment. The seeds that they consume are brought back to the earth through their feces. Thanks to this feeding and pooping cycle, new plants grow and help boost the vegetation of their habitat.

August to April are the breeding months of the nene bird Hawaii breed. The state supports and encourages the nesting season of this goose on their islands. And eggs are hatched typically from November to January.

In one clutch, there are 1-5 eggs, and the incubation time is 29-32 days. Throughout the nesting period, the males have the sole responsibility to defend their territory. They forage, hunt, and bring food to their family. And each year, there is only one brooding period.

Additionally, though the young nenes develop into capable juveniles quickly, they choose to live with their adult parents. This family bond continues until the start of the next breeding month.

Facts About the Nene Species 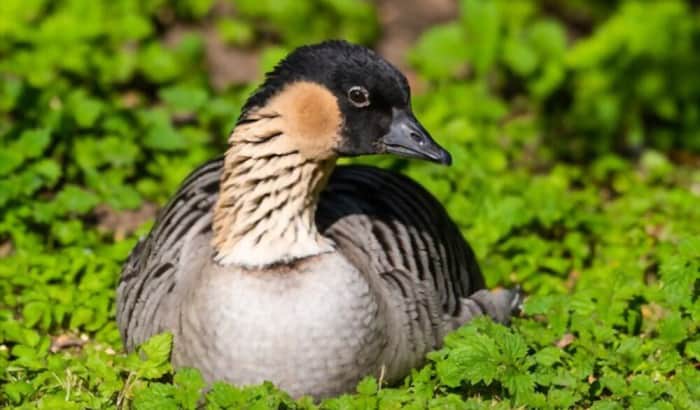 Nene is unique in its appearance, and there are a couple of Hawaii state bird facts that you should be acquainted with.

The nenes have an expected lifespan of 8-20 years. And this is their scientific classification:

The national bird of Hawaii is a quiet species that makes soft sounds. Their call sounds like “ooo-aaah” or “oooo”, with a super low pitch. They have other call vocal patterns too, but they rarely use them. Without a doubt, the nenes are perfect neighbors thanks to their serene behavior.

The bird name nene is no doubt rare and unusual. This avian species derived its name from the soft calls that it makes. And the scientific name sandvicensis comes from the previous designation of Hawaii, which was Sandwich Islands. 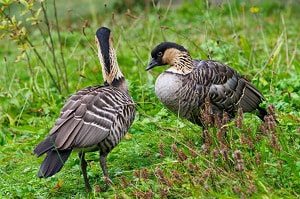 The state bird of Hawaii name is nene, and their population is very low. To resolve this problem, the state made an agreement with the WWT or Wildfowl and Wetlands Trust to breed the nene species in England. They were then reintroduced to the Hawaii islands.

Thanks to this program, the nene became a threatened rather than an endangered species. 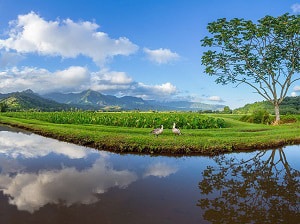 The Hawaiian creation chant called Kumulipo depicted the nene bird as a guardian spirit. They are regarded as spiritual creatures that form a link between the coastal regions and the mountains. Many people believe in the nenes as their guardian spirit, and they continue to symbolize something good.

In every flock, there are a couple of nuclear families that nenes are a part of. But even though this goose species forms communities, they are not willing to share their nests with their neighbors. Though this is the case, nenes get along well with each other, unless provoked or threatened.

The Aloha state bird is monogamous in nature, and they do mate with one partner for the rest of their lives. Male geese show their affection to their potential mates by driving their rival away and showing their under-tail area. 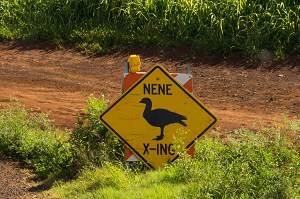 Hawaii has a law in place that protects the nene species.

However, people are exhorted not to feed the nenes, disrupt their activities, or disturb them in any way. Other than watching them from a distance, physical contact and other activities are prohibited by the law.

The nene species is recognized to be the rarest goose in the whole world. Their population is only 2500, and they used to be over 20000 in number. Hunters and predators majorly decreased their population.

The nenes do migrate, but over a short distance only. And they do so in order to find better sources of plants, seeds, buds, flowers, and other vegetarian foods.

Unlike other goose species in the Aloha State, the nenes don’t have the same netting design of feet as others do. Their feet actually adapted to their environment and are crucial for their survival. With their less webbed feet, they are capable of walking and climbing on rough terrains. 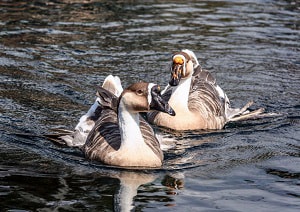 Nenes are waterfowls. And so you may expect them to actually be good at swimming, especially since they’re geese in nature. But nenes cannot swim, which is definitely ironic.

What is the state bird of Hawaii? It’s the nene. This bird species has a unique appearance, and they are one of the rarest feathered creatures in the world. Nenes are not noisy, and they live well with others in nuclear families. When sexually matured, nenes mate with one partner for life.

We hope you liked this post. Kindly help us share this information to the world. If you know any interesting facts about this bird, leave a message.