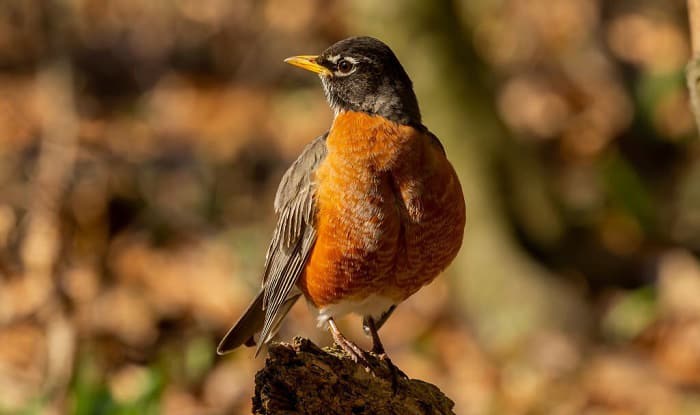 What is the state bird of Wisconsin? It’s the American Robin! This bird is a member of the thrush family and one of the most iconic and well-known black and orange bird Wisconsin. You can also spot them easily in many gardens throughout North America, pulling worms out of the garden bed and doing homeowners a favor.

There is so much more to learn about this Wisconsin bird. Read about how it became the representative avian of the state and how to recognize one when you see it on your lawn. 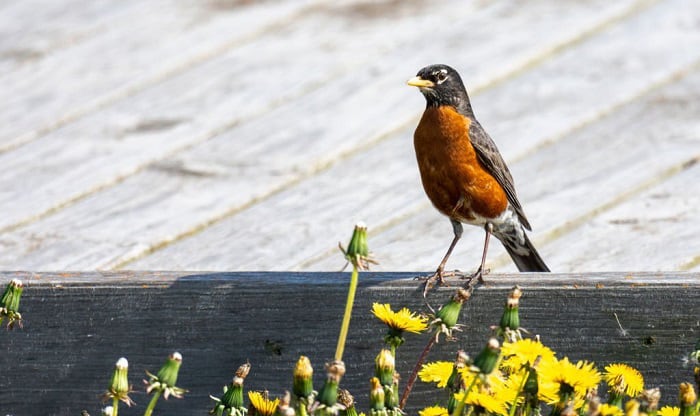 American Robin or Turdus migratorius can be seen throughout the North American regions. Their population is prevalent in areas where people live, close and comfortable enough to skip on lawns and nest on roof gutters. Let’s get to know these friendly backyard birds.

Mature American Robin measures nine to eleven inches long, weighs approximately 77 grams, and has a wingspan that can spread from 12 to 16 inches. You can easily spot them with their unique brownish-gray coloring.

Both genders have the same red-orange bellies and chests. You can tell them apart by looking closely at some features. The males have a darker shade on their heads while females are more pallid.

These birds can be seen frolicking around suburban areas close to where people live and agricultural areas, especially on open grounds. American Robins are abundant and are scattered not only in Wisconsin. They are also permanent residents in Tennessee.

American Robins stay in Wisconsin throughout the spring and summer during the breeding season. In the winter, they migrate in flocks to the south in Georgia, Guatemala, and as far as southern Mexico.

American Robins eat a variety of food throughout the day. They are often seen pulling earthworms in the morning and foraging for fruits in the afternoon. The season can also dictate the food they consume.

During the summer and breeding season, there is an abundance of insects, worms, and protein-rich food they share with their younglings. In the winter, they will settle on fruits. While migrating, they will devour anything they can find, from bugs to berries. 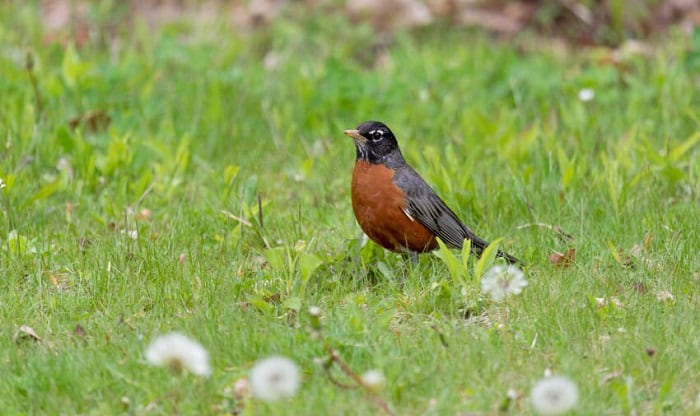 Here are more questions you can often hear asked about the Wisconsin state bird.

Why is the Robin Wisconsin’s state bird?

Federated Women’s Clubs of Wisconsin hosted a statewide poll for the state bird. Its students for the school year 1926 to 1927 elected the American Robin as the most famous bird species in the state. The survey revealed the robin got two-fold of the total votes than other species.

When did the American Robin become the state bird for Wisconsin?

June 4, 1949. Prior to this, the bird was chosen in 1927. With the support of Mrs. Bowman, Conservation chairperson, legislation officially adopted the American Robin as Wisconsin’s representative avian after 22 years.

Wisconsin robbins tend to run and stop, tilting their head side to side while observing the ground for any movement that can lead them to a food source. It is a unique behavior observed from them when they are hunting for food in yards and gardens.

Despite their friendly nature, American Robins are less social and distant during the breeding season. They often travel in flocks, but when the group scatters around, it is the first sign that spring is coming, and it is time to raise a family.

What is the Wisconsin state motto?

Forward. This one-word official state motto was approved in 1851. It is displayed on Wisconsin’s flag, official seal, and a commemorative quarter.

The common symbolism and meaning linked to the American Robin were passed on from the European Robin that is rooted in folklore and legends. The symbolism can vary depending on the different cultures and what they do, but generally, the red-breasted robins represent rebirth, hope, and peril.

American Robins are spirit guides bringing messages of hope. Their appearance during spring shows rebirth. However, the red crest is an indication of danger lurking nearby.

Now that you know what is the state bird of Wisconsin, we hope you have a better understanding of the American Robin. If you want to know more about other birds, check bird identification Wisconsin where you can see pictures and hear bird sounds.

If you know a new birder who is curious about the state bird of Wisconsin, share this article with them. When was the last time you saw an American Robin? What bird do you want to get to know more about? Share your thoughts with us in the comment section below.