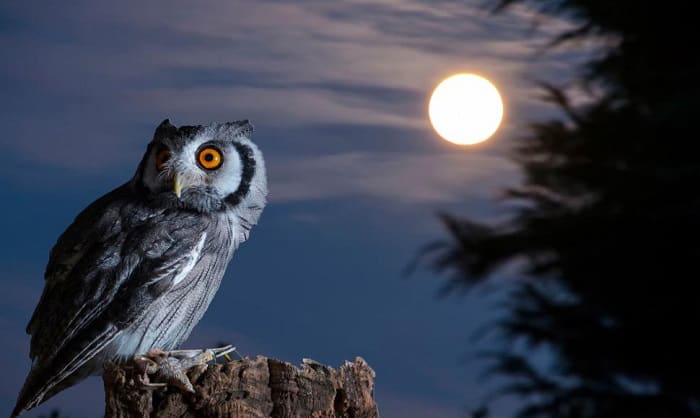 For some reason, most of us have always believed that birds are active in the daytime and rest at night like humans. Birds are thought to fly around, find food, and do some singing, exclusively in the morning. However, did you know that there are still several species that are late night creatures? Yes, there are, absolutely.

Some nocturnal species, like barred owls, chirp and even hunt in the dark thanks to their incredible eyesight. Others, like Northern mockingbird are well-known for their massive song collection that is triggered by the full moon.

There are many more to discuss about and particularly, in this article, I will show you plenty of outstanding features that each of these representative nocturnal birds have. You and I will consider the American Robin, Barred Owls, Northern Mockingbird, Upland Sandpiper, Common Loon, Eastern Whip-poor-will and Yellow-breasted Chat. 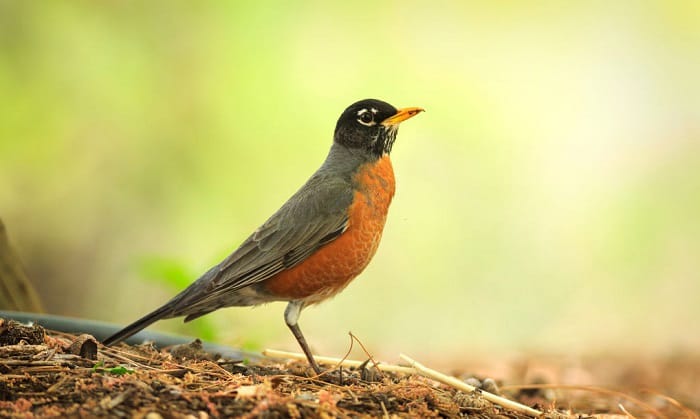 American Robins rarely stay active during daytime because they are extremely sensitive to light, both natural and artificial. Insectivores like robins are excellent in adjusting themselves to searching for food in low light situations. Apart from lighting, they cannot familiarize themselves with noisy sounds. Thus, calm nights are the ideal atmosphere where they are often seen and heard singing.

A robin is usually the first one to be heard chirping early in the morning as soon as the sun rises and the last one to take a break late at night. Their songs are labeled as joyful melodies that have a springtime vibe and sometimes even intensely alarming.

There is no specific period measured for when robins sing the most because they typically sing all year round. Furthermore, songs by robins can be triggered by other nocturnals’ chirping and plenty of natural phenomenons, such as blur lights and intense sounds from nest shaking or even fireworks and thunder.

Singing at any time of the year along with the ability of being triggered by anything have made these nightingales the most popular nightfall birds in gardens and villages. 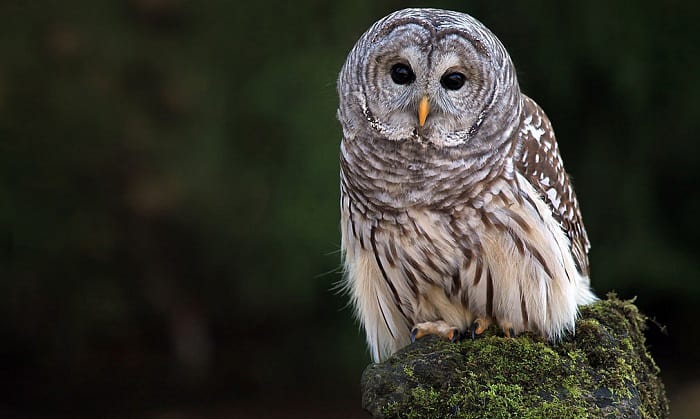 These birds are one of the most common birds chirping at night all over the southeast of the US. The peak period of the majority of bird sounds is in the breeding season, which is when barred owls will make hooting, cackling, and gurgling duets. In addition, “who-cooks-for-you” call is a unique symbol of barred owls, which helps people identify them more easily.

Barred Owls are North America raptors that have extraordinary eyesight to reinforce their hunting skills for little mammals and other birds, no matter how dark or faraway it is.

Aggressive though they are, during hunting, these owls use a strategy to approach the prey in silence. However, they won’t be able to make it without turning their irreplaceable wing structures, which have small serrations on the feathers, into advantage. This noiseless flying pattern together with incredible eyesight make them remarkable nighttime raptors.

Not only are barred owls definitive in hunting, they are also definitive when it comes to claiming territory. Especially when they have chosen a nest site and had baby birds, they will protect and hold onto them at any cost. If any interlopers come near their home, barred owls will furiously chase them away by attacking them with their spiky talons. 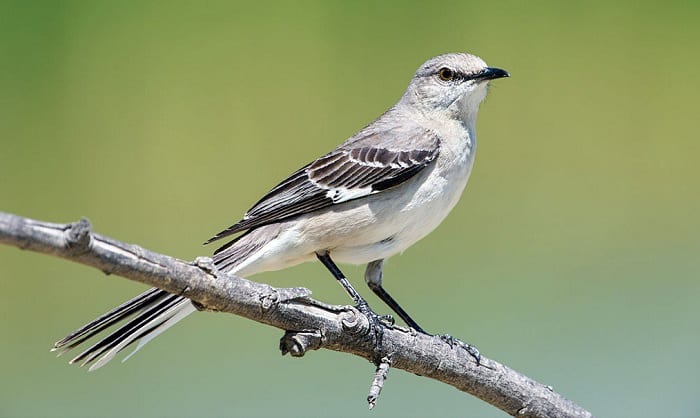 Northern mockingbird is originally native to South America, but in recent years, they are commonly found in central America, Canada, and Mexico.

Omnivores like northern mockingbirds can literally eat anything they can find in the wild. Their diet is believed to comprise seeds, berries, mealworms, and small mammals like lizards.

According to birdsandwild, the males are able to learn more than two hundred different songs in their whole life and these songs are mostly triggered by the full moon and sometimes by other birds’ melodies. Their tunes are diverse in different lengths, notes, and tones and they continuously switch to brand new songs to show off their incredible vocalization. Unfortunately, in some cases, northern mockingbird’s staggering ability of singing numerous songs makes them a target of human hunters. Fifty years until now, their numbers have been decreasing by 20 percent and there is still no sign of stopping. 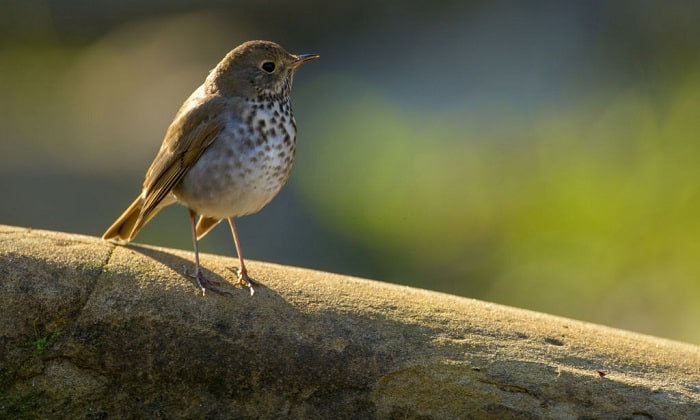 Another North America songster that has a habit of chirping during nightfall is the Hermit Thrush – a beautiful reddish brown bird with a distinctive chubby body. You will likely have a chance to enjoy this bird’s harmonious singing and whistling from spring to fall annually.

Each of their songs is a chain of tuneful expressions on different pitches, which provoke satisfaction because they sound no different to a flute. Similar to American Robins, the Hermit Thrush is probably one of the last birds chirping at midnight and the first ones to show up performing early at dawn from a broad and spacious perching.

Instead of seeking food while gliding through the sky like others, Hermit Thrush will forage mostly on dry land, such as leaf and branch litter. They will hop around for a while and use their beak to dig and grab the food. Their assorted diet consists of seeds, berries, and tiny insects like crickets, beetles, ants, worms and grasshoppers. These foods are usually collected by the males and fed to the hatchlings by the females.

Not only is singing a part of their natural habitat, it is also a strategy they apply when declaring territory, which is normally well hidden and located at grounded locations like sport courts, graves, and fields. 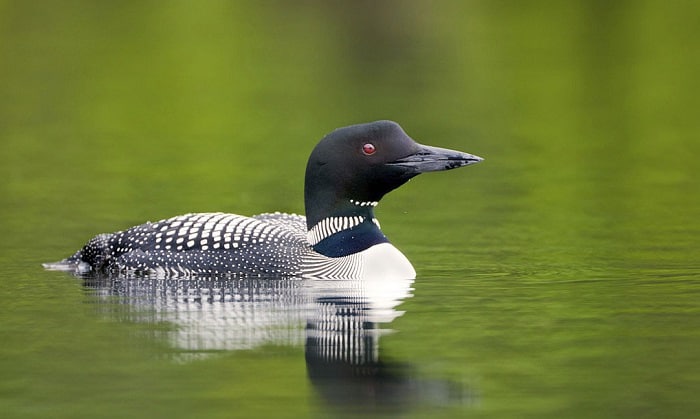 While other magpies chirp joyfully with those high notes, the common loon will sound more like a sorrowful piece of music, which apparently, have become their symbol. As soon as the night wraps the sky, we get to witness and hear those sounds clearly. Generally, they might make these trembling, cackling tunes and keep howling similarly to wolves, all of which combined together to create a mournful and slightly haunting vibe.

The diet of common loons includes primely fish, leeches, shrimp, and especially lobster in winter. Therefore, they are seen swimming in lakes, ponds, swamps, and rivers most of the time. They are absolutely skillful swimmers but might trip easily when walking on land. A common loon is an antisocial type of bird that chirps at night, it rarely forages or flies together in flocks.

Tragically, lakes and many other gigantic water areas are where windmills and turbines are located, which results in unexpected circumstances where common loons may collide severely while migrating. Additionally, their number in North America is declining remarkably due to water and coal-burning pollution. 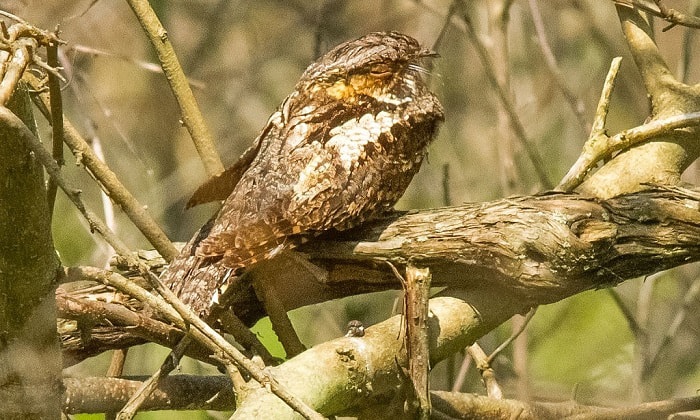 Another member of the nighttime songster family is the eastern whip-poor-will – an expert in disguisement owing to their tree trunk-like feather color. These birds are insectivores that rummage for food at night and typically sleep in daytime. Their territories are found on low and shady areas and mostly on the ground, in the middle of dry leaves and branches piles.

Eastern whip poor will are not as talented as other nocturnals in singing but apparently, their signature calls sound extremely identical to a song. In breeding period, males will show up at visible perching and constantly carry out these tuneful calls in order to attract mates.

Unfortunately, these whip-poor-will’s population is declining day by day due to scarce food sources, deforestation, threat from dogs and cats, and even poison by insecticides. However, since their range is enormous, their entire kind is not considered an alarming endangered species worldwide. 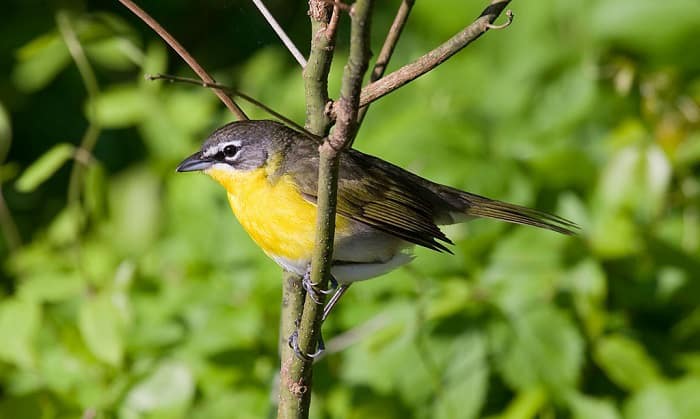 One of the most easily recognized birds is the yellow-breasted chat, which has a signature bright yellow upper underside belly and throat. It is commonly found in North America, especially from southern Canada to northern Florida and they usually migrate to central America and Mexico when winter comes. Specifically, their favorite places to claim territory includes vacant pieces of land, somewhere covered with overgrown bushes and many rural areas.

Just like northern mockingbirds, yellow-breasted chat are omnivorous species. Occasionally, these birds will use their feet to grab and hold the food, which mostly varies from wild berries, seeds to small insects such as bugs, flies, caterpillars, beetles, and grasshoppers.

They are very shy birds and hardly expose themselves but that doesn’t mean their songs are underestimated. When this bird sings at night, it produces songs that are a little bit odd and special, which have a series of the hooting, clucking, whistling and cackling sounds. What’s surprising about this is that they are not naturally born with these exceptional chirping, as they grow, they unintentionally imitate other birds’ calls and eventually form their own tunes. Moreover, they can sing when in flight.

Also, check this guide to know the best way to stop birds from chirping at night.

Above, I have listed seven classic types of birds that enjoy singing at night, and this video will offer you a realistic experience of hearing their chirping.

Birds chirping at night is not only because it is their basic instinct, but also because nighttime offers a truly calm atmosphere for birds to show off the best of their nocturnal vocalization.

Moreover, it is best for birds to immigrate at night because they can rely on stars and the moon to navigate. Even though singing beautiful melodies and staying active at night are what all nocturnal birds have in common, each of these species have different features such as outer looks, personalities, and other habitual behaviors, such as foraging, building nests, and doing flight calls.

By attempting to tell apart these interesting wild songsters, you can significantly upgrade your birding-by-ear skills as well as make the most of the bold nature moments. How many of our top seven members of the nightjar family have you heard?