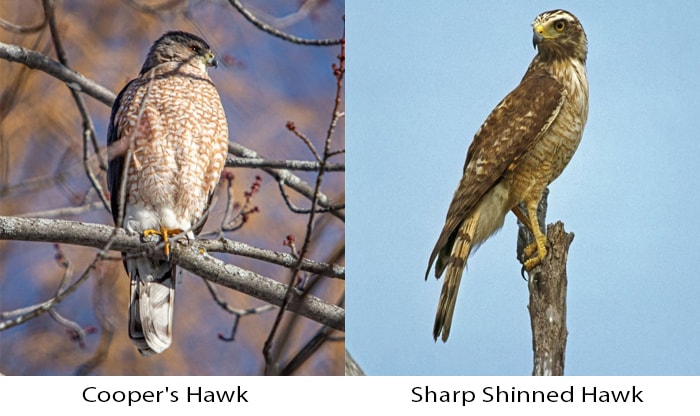 Hawks are powerful raptors and exclusive carnivores that are excellent in hunting. Not only do they have interesting wildlife habits but they also vary in plenty of species. In this article, I will show you beneficial information, which is the key to identifying a cooper’s hawk vs sharp shinned hawk. 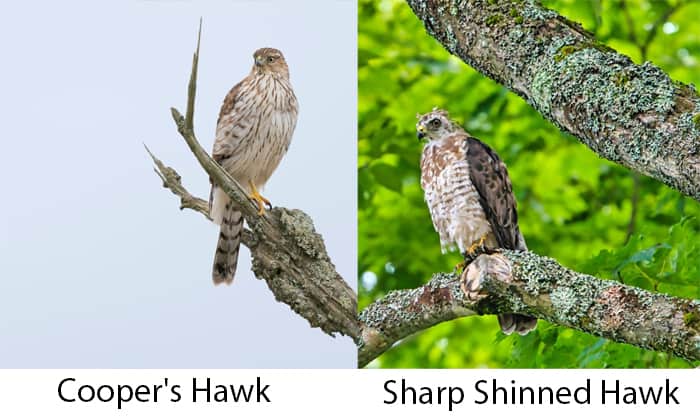 A sharp shinned hawk is comparatively smaller than a cooper’s hawk.

So, Cooper’s hawk is similar in size to a crow or dove, which is about 4 inches bigger than a sharp shinned hawk.

However, deliberating on the general shape of a bird is a much easier method that you can try. The body of a sharp shinned hawk looks similar to an inverted triangle as it has a heavy-shouldered form along with a much narrower hip. A cooper’s hawk has a more balanced body that seems like a barrel shape.

Make sure you observe the bird from different angles to get an accurate body proportion viewing.

On the other hand, most cooper’s have gray or chocolate brown heads and wings that contrast with white underparts featuring the same brown tone streaking.

Cooper’s hawks have light yellow or warm brown eyes and in contrast to the sharp shinned hawk, they have thicker and shorter legs.

Accipiters like cooper’s hawk have short and straight wings with slightly pointed ends; whereas sharp shinned hawks have forward and rounded-end wings with a few feathers that are open and separated at the tip, making them look like fingers.

Spend a few minutes to take a closer look at the sharp shinned hawk image below to recognize the subtle difference in their wings. 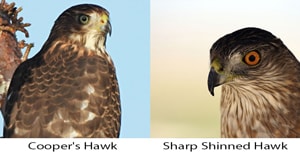 The cooper’s hawk has a dome-shaped and block-like head, which is more prominent. Generally, this head form makes them look more furious and aggressive than the rest.

As you can see, a cooper’s hawk has a moderately long neck so it’s easy for them to make head movements.

A sharp shinned hawk, on the flip side, has a stunted, smaller, and more smoothly rounded head along with a very short neck, which makes them appear to have no neck at all.

One of the best keys to better identification is checking out Cooper’s hawk vs sharp shinned hawk tail. You should wait until they are perching or having a rest to see their tails clearly.

The tail of a cooper’s hawk is noticeably long and typically has a rounded end. Adversely, a sharp shinned tail is similar to a square shape with sharp corners and a straight edge.

For patterns, their tails both have two-colored stripes with the same and darker color tone in their upper parts. 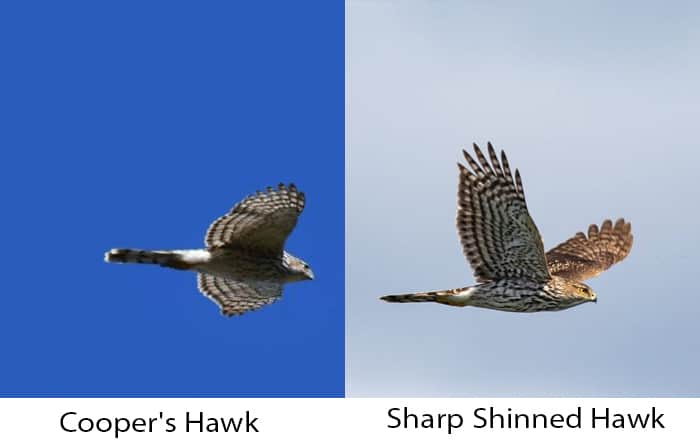 Cooper’s hawks look like a flying cross. They typically fly with a pattern of many rapid flaps and then a glide. However, they rarely flap continuously even when they are crossing a large open area.

Sharp shinned hawks look like a flying Tl and they usually show their unique flap-and-glide flight pattern whenever they fly across open areas. These hawks mostly fly in a purposeful direction at tree-top level or lower.

Most hawks are popular for their high flying speed and Cooper’s and sharp shinned hawks are no exception. Most sharp shinned range from 16 to 60 mph in speed while cooper’s soar at more than 50 mph.

Both of these species typically migrate alone but they can also be seen travelling with other hawks, usually in groups of two to five. 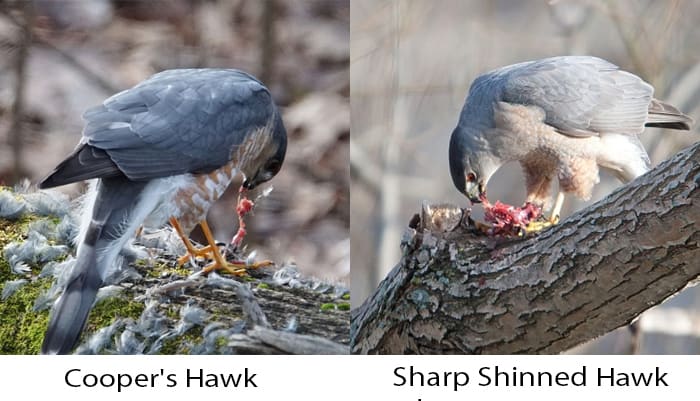 When attacking, Cooper’s hawks stoop very fast from up high in the sky and then lower to the ground. This process repeatedly occurs until they can approach the prey and confuse it.

Conversely, sharp shinned hawks do not soar and land from high overhead. Since they are equipped with sharp wings, they fly speedily through the woods to surprise their prey.

Sharp shinned hawks prefer to hunt by perching in bushes and tall trees and waiting for their unwary prey to fly past. Cooper’s hawks, however, will usually perch upon high objects, such as fences, cell phone towers and electric poles to ambush their prey. 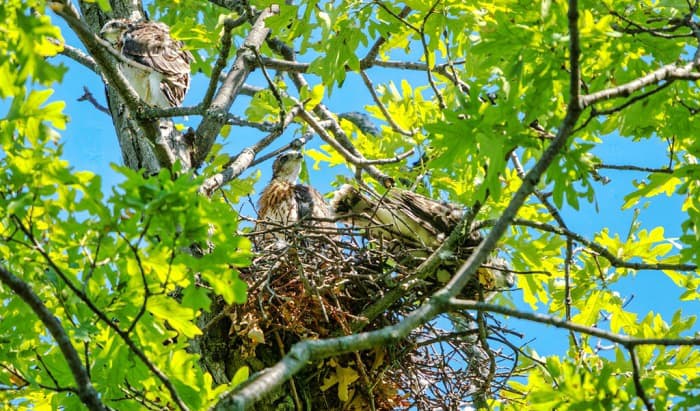 Nests are made with small branches and placed in the hollows of the tree or at the intersection between the branch and the trunk. Furthermore, sometimes they may take over existing and old nests of other birds. Occasionally, it takes them approximately two weeks to complete. The female cooper lays 3 to 4 eggs in a clutch and incubation lasts from 34 to 36 days.

This is one of the most challenging factors to consider when it comes to sharp shinned vs cooper’s hawk identification because both of these two types concur to scatter in their range.

However, cooper’s hawks are much less common in gardens and yards than sharp shinned hawks.

The sharp shinned can be found in central America and Alaska and somewhere further north and south. The Cooper’s is native to North America and ranges from southern Canada all the way to Mexico.

To sum up, when considering if the hawk you are seeing is a cooper or a sharp shinned, it is greatest to count on several factors, the more the better. The differences are a little subtle, but tail shape and overall body shape can help remarkably. Frequently viewing the sharp shinned and cooper’s hawk images is also highly recommended because it can help you improve your comparison ability.

With all of the essential information provided above, I hope that from now on, telling the difference between cooper’s hawk and sharp shinned hawk is no longer challenging for you.

Besides, you also can refer more to other interesting topics of birds: