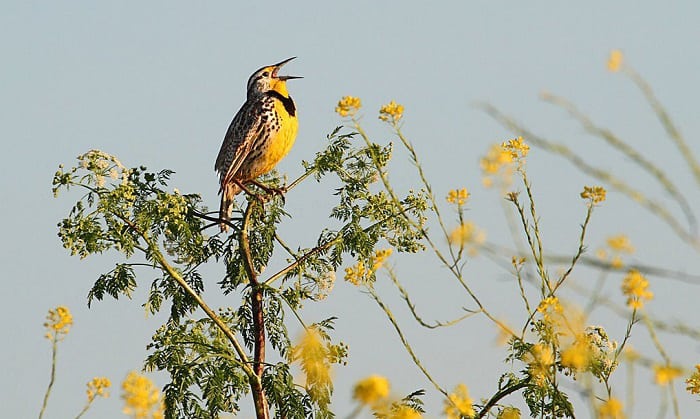 To satisfy your curiosity regarding what is the state bird of Wyoming, the answer is the Western meadowlark. This passerine species was given this privilege in 1927. And aside from the Equality State, it’s also the legislative emblem of five other states, namely Montana, Oregon, Kansas, North Dakota, and Nebraska.

The Western meadowlark is a songbird that is distinctive thanks to their famous “V” lined front. This ground-nester passerine loves the open field. And they like insects, seeds, and fruits.

Valuable Facts About the Western Meadowlark 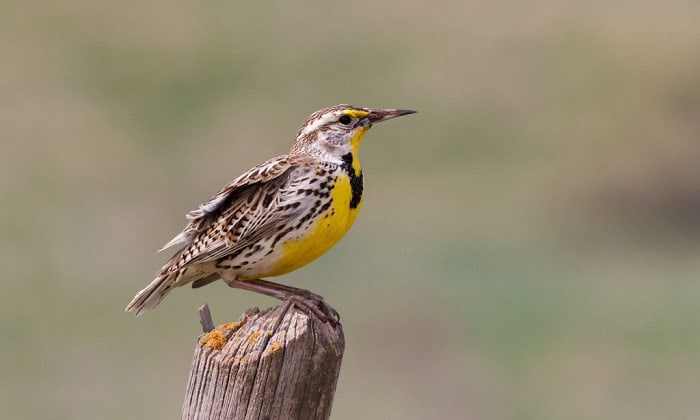 The Wyoming state bird and flower Wyoming Indian paintbrush are often captured in beautiful photos. The Western meadowlark became the official state bird of the 10th biggest US state on February 5, 1927.

This cheery passerine species emits a flute-like murmur tune, and their songs are subtle. Wyoming chose this bird because they are found everywhere in the state. Plus, they’re very helpful in cleaning up the gardens, grasslands, and open fields from insects.

Let’s explore a couple of facts of the Western meadowlark.

One of the most interesting Wyoming state bird facts is the nesting period of the Western meadowlarks. Their nests are typically located on the ground instead of above the earth.

The Western meadowlark is highly distinguishable thanks to the “V” lined, black-colored chest. Their golden underbelly complements their breast pattern, especially combined with their white sides with flecks of black. This fascinating bird species has lengthy sharp beaks that are perfect for foraging insects, seeds, and fruits.

This state bird of Wyoming has a chocolate-shaded upper body with dark strokes. And their striped heads have pale hazel and black specks.

60-70 percent of the Western meadowlark’s diet is composed of sowbugs, caterpillars, beetles, grasshoppers, cutworms, spiders, and snails. They also like to ingest fruits, especially berries, and they like seeds too.

The Wyoming’s state bird is known to sing only during the day. They are very active when the sun is up, but they hide on the ground at night. This behavior allows them to safeguard themselves from the beasts of prey.

The males find a spot for the two female birds during the breeding season for mating. The males take care of both families at the same time. Also, the Western meadowlarks mate with Eastern meadowlarks.

The migratory Western meadowlarks typically hunt for food alone, except when the frosty season comes. During the cold days, this bird species forages for insects, seeds, and fruits in small groups.

The Western meadowlarks are not fond of dense shrubberies and forest areas. They like open fields, and their typical roosting place is the ground. This bird species can be found in grassy fields and marsh edges.

Because these birds roost and nest on the ground, the birders would need to tread carefully as they search for Western meadowlarks for watching purposes, or capturing photos.

The meadowlark birds of Wyoming are categorized as Western and Eastern. Both species are so much similar in appearance.

In 1805, explorer Meriwether Lewis discovered the difference between the two bird types. Both passerine species differ in their bill and tail formation, as well as in their songs.

However, the findings of Lewis were ignored, until a popular ornithologist took notice. John Auduborn officially distinguished the Western meadowlarks from the Eastern meadowlarks.

The Western meadowlark has a scientific name of Sturnella neglecta. It was Ornithologist John Audubon who gave this name to this medium-sized bird.

“Starling-like” is what Sturnella stands for, and he chose “neglecta” because the scientists neglected the facts provided by Meriwether Lewis about the difference in the bird species.

Indeed, the scientific name is befitting the adorable colorful avian.

The Wyoming bird is not fond of visiting backyards. This is mostly because the Western meadowlarks are antsy with humans, especially in the breeding season.

However, when you offer them the right food, they will surely grace your bird feeder with their presence.

For your feeder, it’s important to know what kind of food this passerine species loves. The Western meadowlarks love grains, weed seeds, and berries.

The answer to the question of what is the state bird of Wyoming is the Western meadowlark.

This avian is the official state bird of a total of six states. Though not sociable by nature, this type of bird flocks together in winter to hunt for food. And, though males have two mates in one territory, they fiercely take care of both families.